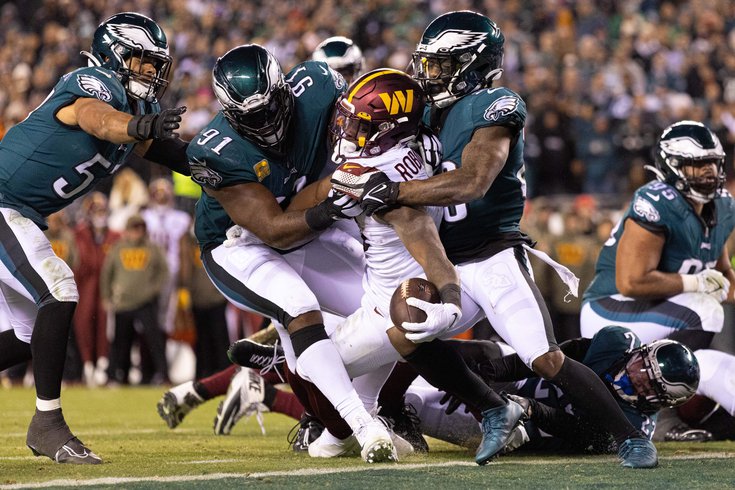 The Eagles' defense is going to have to play a road game on short rest after playing 83 snaps against the Commanders.

In their Week 10 loss to the Washington Commanders, the Philadelphia Eagles played 50 snaps on offense, and 83 on defense. The large discrepancy between the plays run for each team was one of the stories of the game. Let's get to the positional snap counts.

Analysis: The Eagles only had nine drives in this game (excluding the late-game lateral play). Those drives went like so:

I thought Hurts' interception was a well-thrown ball. One might quibble with the decision to throw to a covered player, but if there's a player you'll make an exception for, it's A.J. Brown. I think the overwhelming majority of Eagles fans are fine with Hurts letting it rip down the field and letting Brown win contested catches right? Well, on Monday night, Brown lost a contested catch battle.

The final offensive series of the game was disappointing from Hurts' perspective. The Eagles had a chance to steal a game in which they had been thoroughly outplayed, and they meekly went 3-and-out. But certainly, Hurts is pretty far down the list of reasons the Eagles did not win this game.

Analysis: Because the Eagles barely possessed the ball in the first half, Sanders only had one first-half carry. He finished with 12 carries for 54 yards.

Analysis: Targets have not often come Quez Watkins' way this season, but he got four of them Monday night, and he caught all four for 80 yards. He also had the most damaging play of the night when he fumbled after his 50-yard reception.

I think that was the play that best exemplified the notion that it just wasn't the Eagles' night. Had Watkins stayed his feet on the play (it didn't look like he needed to lay out for the football), that's a walk-in touchdown.

Analysis: In addition to having his face thrown into the turf on the play in which he fumbled, Goedert might have been poked in the eye. He also had all the force of a 321-pound John Ridgeway land on top of his shoulders.

Maybe Dallas Goedert fumbled because he got poked in the eye while his face mask was being pulled?
pic.twitter.com/hGRGccuVxV

I think the dozen officials on the field poked themselves in the eye before this play to have missed the blatant facemask.

Anyway, Goedert stayed down on the field for a bit after that play but he never missed a snap.

Analysis: At least the offensive line will be well-rested for next Sunday? Is that a silver lining?

Analysis: The Eagles absolutely do not want Cox playing 70 snaps, or Hargrave playing 66 snaps, but Jonathan Gannon obviously felt it necessary in a close game. Marvin Wilson was not a practice squad call-up like he was a week ago, so he was unavailable to help give the defensive tackles a breather.

Has anyone seen Robert Quinn? He still has a chance to make an impact before the season is over, but three games in after acquiring him from the Bears he has been a no-show.

On the bright side, Hargrave stayed hot with another sack and 13 tackles, while Sweat had a huge hit (and forced fumble) on Taylor Heinicke that led to an Eagles touchdown.

Analysis: Edwards had 12 tackles and White had 8. As noted in our 10 awards, the Eagles' run defense is probably going to come under some scrutiny after this loss, but the Commanders only averaged 3.1 yards per carry.

Analysis: Gardner-Johnson hauled in his sixth INT in five games. I thought the Eagles had decent enough coverage on the night, but they were often playing too far off on third downs, though that has been more the fault of Gannon's defensive play calling in high-leverage situations.