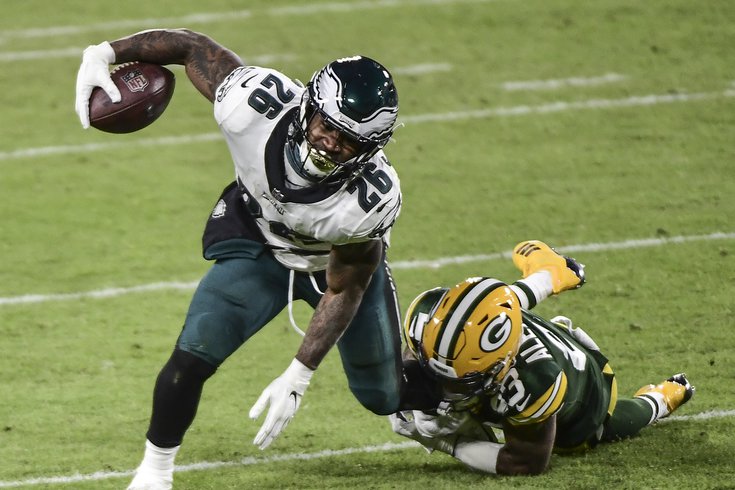 The Eagles' underutilization of Miles Sanders is fine in a lost season, though they probably don't deserve credit for that.

In their Week 13 loss to the Green Bay Packers, the Philadelphia Eagles played 62 snaps on offense, and 61 on defense. Let's just get right to these nonsensical snap counts.

Analysis: Hurts made a couple of plays, temporarily sparking the offense. Wentz looks like the shell-shocked quarterback who has taken 50 sacks this season. It's clear that the move that makes the most sense down the stretch for the Eagles is to start Hurts and see what they have there.

Analysis: The Eagles started their 11th different offensive line combination in 12 games. As always, let's go ahead an update those:

Of course, much of the above is the Eagles' own doing. If the Eagles had just left Mailata at left tackle when Peters returned from injury, or allowed Lane Johnson's ankle to heal before putting him back out on the field prematurely, maybe they would have fewer OL combinations this season.

For the second time in three games, Peters came out of the game after the score was seemingly out of reach.

Analysis: I've seen some hand-wringing over Sanders' minimal usage, despite the notion that he's probably their most talent offensive weapon. Ultimately, it's what's best for the team. There's no sense in piling a bunch of touches onto Sanders' odometer in a lost season, so the less he is used, the better. Of course, that's certainly not the Eagles' reasoning for his lack of usage, so please don't mistake the above commentary as me awarding them a gold star.

Analysis: Alshon Jeffery is so cooked that even Jim Nantz and Tony Romo mentioned during the telecast that he doesn't look right. In four games, on 8 targets, Jeffery has 2 catches for 15 yards. I went back and looked at all of Jeffery's targets this season, and here's what I found.

• 2 drops. On one of the drops, the telecast correctly pointed out that Jeffery ran a bad route, and didn't seem ready for the ball to come his way, before having the ball go through his hands.

• 1 decent throw down the sideline that fell incomplete that might have been completed to a receiver that can run a sub-5.0 40.

• An offensive pass interference call. On this route in particular, you get to see Jeffery get into a full sprint out of his stance. I timed the first 10 yards, and got 1.83 seconds. A total of 44 wide receivers ran the 40 at the 2020 NFL Combine, and their 10-yard splits ranged anywhere from 1.43 to 1.59. While not an apples-to-apples comparison (guys at the Combine get into a sprinter's stance, and they're not wearing pads, and they're on cleaner turf), I mean, come on. Just look at how slow that route is.

It's flat-out malpractice that Jeffery is getting more snaps than the most productive receiver on the team and one of the true bright spots of this disastrous season in Travis Fulgham.

Analysis: Zach Ertz had 2 catches for 31 yards in his return to the field. His snaps were (rightfully) nearly doubled up by Dallas Goedert.

Analysis: Aaron Rodgers often had all day to throw. The telecast mentioned that the defensive line was probably the biggest strength of the team, and while they aren't wrong, that praise came in a game in which Rodgers was getting to his third and fourth progressions, and then starting over again before throwing.

Analysis: Singleton led the team with 12 tackles. The next closest player had 5.

Analysis: Slay now has a knee injury on top of his calf injury. He struggled for the second straight week with an elite receiver. Broken record alert: Maddox is not an outside corner, and it was a mistake to think that he was.