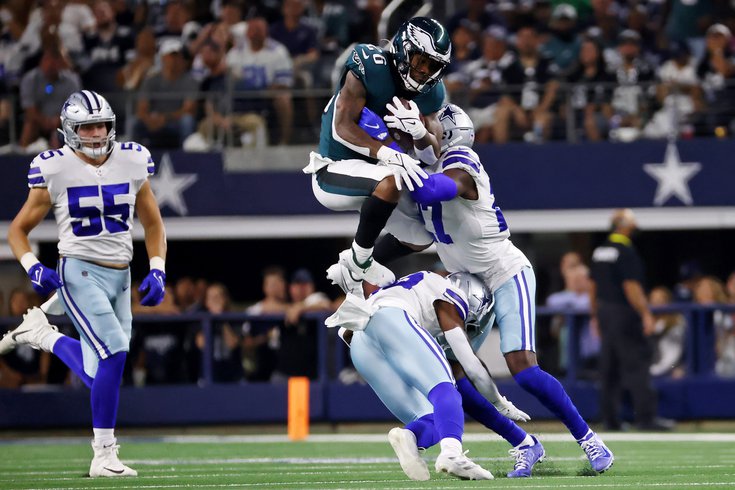 A rare sight Monday night: Miles Sanders with the ball in his hands.

In their Week 3 loss to the Dallas Cowboys, the Philadelphia Eagles played 58 snaps on offense, and 77 on defense. Let's just get right to the snap counts, and some notes.

Analysis: Hurts' audition to be the Eagles' long-term answer at quarterback has not gone well the last two weeks after an encouraging Week 1 start against the Falcons. His accuracy issues remain a major concern.

Analysis: It is absolutely wild that the Eagles had zero interest in running the ball against a Cowboys defense with an extremely injury-depleted front seven. They were missing six defensive linemen, a starting LB, and a starting safety, and Sanders only got two carries. How is that possible?

Analysis: Watkins continues to make impressive plays. Why is he getting fewer snaps than Reagor?

Analysis: Goedert and Ertz had good games, statistically. They combined for six catches for 119 yards and a TD. However, Ertz had a drop deep in the Eagles' own end that would have given the offense some breathing room. As Ertz's physical skills erode away with age, those are the types of plays he cannot leave on the field.

Analysis: It looks like Seumalo is going to be out for a while, and possibly for the season. We'll likely get more information on his status today. Nate Herbig filled in for him. Let's go ahead and update the Eagles' starting offensive line combination chart.

Heading into this matchup, there was concern about Dillard having to start in place of Mailata. The re-watch will reveal whether Dillard played well or not, but at a minimum, he seemed to hold his own. He was a pleasant surprise.

Analysis: Brandon Graham's abilities as a run stopper have often gone underappreciated, and they were missed in this game. Williams started in place of Graham, with Barnett and Sweat making up some of those missed snaps as well.

Kerrigan has played 94 snaps so far this season, and has been shut out: 0 tackles, 0 sacks, 0 QB hits.

Hargrave continues to play at an All-Pro level. His efforts were wasted in this game.

Analysis: The Eagles still need linebackers. Wilson has been a disappointment.

Analysis: Wallace injured his shoulder in the first quarter and did not return. The Eagles are super thin at safety, and will presumably make a move this week if Rodney McLeod still isn't ready to go against the Chiefs Week 4.