Eagles tied for first atop garbage NFC East, get flexed to prime time 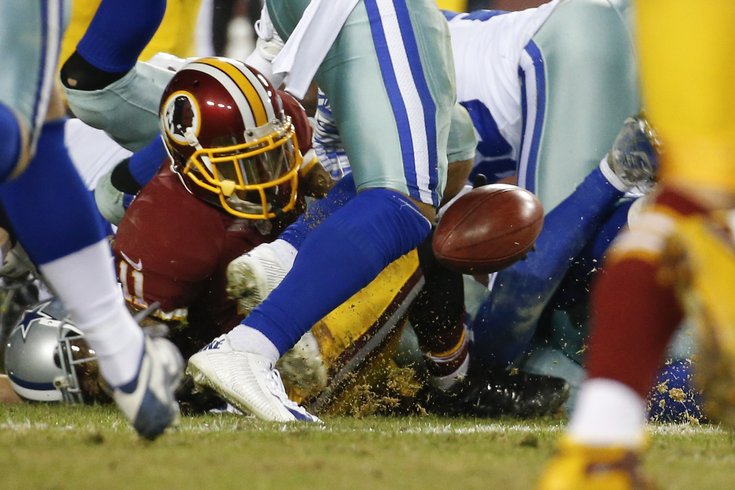 Heading into this past weekend, there was a good chance the Philadelphia Eagles were going to find themselves two games back after their inevitable loss to the New England Patriots, coupled with a win by either the New York Giants or the Washington Redskins.

In a shocking result, on the strength of three return touchdowns (via INT, punt return, and punt block) the Eagles took care of business at Gillette Stadium, and both the Giants and Redskins lost at home to the Jets and Cowboys, respectively.

I won't recap the Giants' and Redskins' games in-depth, but the Giants blew their third 10-point 4th quarter lead this season, and the Redskins did stuff like this:

Let's go ahead and update the NFC East teams' remaining strength of schedules:

As you can see, the Redskins have the easiest strength of schedule remaining. However, three of their final four games are on the road, where they are 0-5 this season.

A week ago, the Eagles-Patriots game was originally the national game on FOX this past weekend, but it was moved out of that spot in favor of the Panthers-Saints game. The guess here is that FOX thought that game had the makings of a blowout, and who could blame them, seeing as the Eagles had just gotten trounced by the Buccaneers and Lions.

One win over the Pats later, and the Eagles-Cardinals Week 15 game is being flexed up to Sunday Night Football. That game will now take place on Sunday December 20, at 8:30 p.m.

From a football standpoint, this is actually bad news for the Eagles, as this game was originally scheduled for 1:00 p.m. EST, which is a disadvantage for West coast teams traveling East.