Why Chip Kelly's philosophy of positive reinforcement is the right one 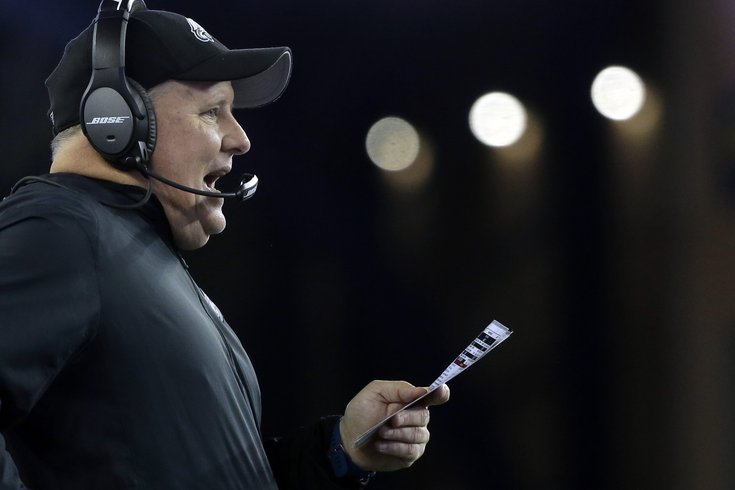 Let's do a little thought experiment, shall we?

Close your eyes and imagine you're a football player playing in the NFL or at an FBS school. Now imagine that your team has been underperforming, and during a critical moment in a game, you commit a costly mistake. You jog to the sideline, and your coach is waiting for you there.

How do you expect to be greeted when you get there?

Do you think you'll get a pat on the back and a don't-worry-you'll-get-it-next-time? Or do you think it would look something like this?

In the often overly-macho world of sports, you'd likely expect something like this poor kid got hit with -- an expletive filled rant that was enough to make even the most strident Gator-haters wince. And that's wrong.

As far as I can tell, that's not how Philadelphia Eagles head coach Chip Kelly operates. He doesn't get all red-faced like Tom Coughlin or scream at his players like we've seen from countless coaches, as recently as this weekend.

"I don’t think you have to yell at grown men. I think every single play in that locker room is as disappointed, or more disappointed, than anybody in this city in terms of how we played and what the outcome of this game was. So for someone to have yell at them or raise their voice, they’re not two year olds. They’re grown men. They know exactly what’s going on. That’s Harry High School stuff. That doesn’t flow and that doesn’t work and that’s not what people talk about it. If that’s what people want, if people want a screamer and yeller, then let’s hire you ’cause you’re really good at it."  [cbsphilly.com]

And on Sunday against the New England Patriots, some of that positive reinforcement paid dividends for the Eagles, who held on to upset Tom Brady and the Pats, 35-28, in Foxborough.

Especially after Kelly decided to take his philosophy a step further.

Last Tuesday, despite the fact that his team was coming off three-straight losses to teams that were at the time in last place, Kelly decided to put together a reel of all positives plays made by every player on the team. He didn't threaten them with less playing time or tougher practices, despite the fact that nearly everyone outside the locker room was down on the team.

“I think positive reinforcement is a productive way to be successful," Kelly said Monday during his meeting with the media. "I don’t believe in negative reinforcement; I don’t think you get a lot out of that. You coach people up, you don’t coach them down. That’s been a philosophy that I’ve used a lot of times. And I’ve always shown guys positive things after games and on Tuesday when we met.”

And there's certainly something to be said about that as a management strategy.

The danger here -- as you might have guessed by now -- is over-inflating a player's (or employee's) self worth; if you only tell them the positive, they may be more likely to coast during practice, or think that they're actually better than they are.

In a town that has been referred to as "Negadelphia," this idea may seem like a foreign, and possibly dangerous, one. But as long as Kelly keeps a balance, he doesn't see a problem with it.

“You talking about this town being negative? That’s the first time I’ve ever heard that," Kelly said with a chuckle. "[Positive reinforcement] has always been my approach, no matter where I’ve been. It’s like raising your kids. Are you going to beat them down every single time they make a mistake? You talk about what they did wrong, but you also praise them for what they did right.

“It’s the same thing — everybody works that way, no matter what environment you work in. If you have a guy who’s just hammering you every day that you’re not doing a good job, after a while you’re going to go, ‘Wow, this isn’t a lot of fun.’"

And that's the point here.

If we return to our initial experiment, we can now take it a step further. Which style would you be more likely to respond to? Odds are, it's not the one that leaves you feeling beaten down and broken each day when you leave work.

After the way his team played against the Dolphins, Bucs and Lions, Kelly would have been justified in ripping into his players. But that doesn't mean it would have been the right thing to do. Instead, the third-year coach stuck to his philosophy of positive reinforcement.

“There’s a lot of good, and that’s what I told those guys last Tuesday," he added. "Sometimes, [the players] don’t see in themselves what we see in them. And that’s why I believe we have a good football team. We proved yesterday that we’re a good football team. But, you know what, that doesn’t matter this week because it’s a whole brand new week and it’s got to start right back over again.

"So they’ll come back into work tomorrow, we’ll get our eyes focused on a really good Buffalo team, and we’ll correct the mistakes we made. You always have to do that."

Don't get me wrong, this isn't why the Eagles were able to upset the Patriots -- I can think of at least 10 other reasons why they won -- but it's almost impossible to deny that Kelly's philosophy played a role in the team looking more confident and inspired than they had since the first quarter against Miami.

As long as Kelly can keep his players focused on the task at hand -- that's not an easy thing to do after a win like Sunday's -- they should be just fine.

“We take each week as an individual season," Kelly said when asked what this win can do for his team going forward. "We had the same exact question after the Dallas game about what that’ll do for us and then we went out and lost to Miami. So our total focus and concentration is just on Buffalo."

Of course, they still have to watch the tape from Sunday's big win. And according to their coach, there will be plenty of constructive criticism to go with the positive reinforcement.

"We’ll highlight what we did well, but we also had a lot of mistakes that we have to still continue to correct," he added. "And that’s part of what the weekly process is about. But really, our focus is really lasered in on the Bills right now.”