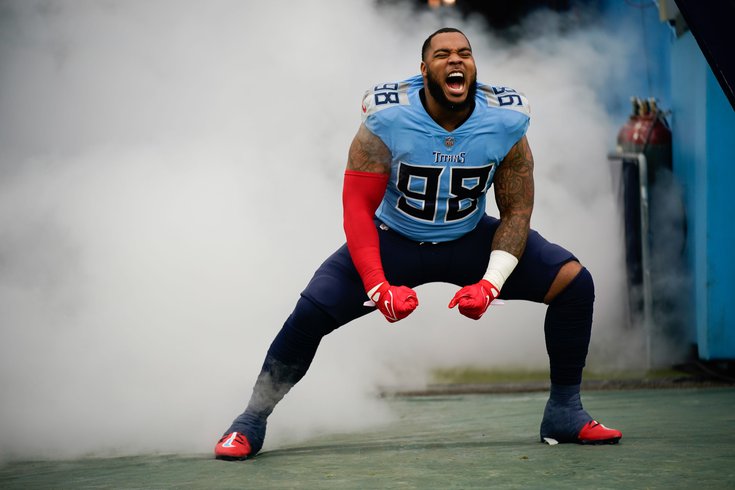 Titans star DT Jeffery Simmons was listed as questionable, but he will play against the Eagles.

The Philadelphia Eagles suffered a significant injury in Week 12, when they lost Chauncey Gardner-Johnson for an undetermined amount of time with a lacerated kidney. Their Week 13 opponent, the Tennessee Titans, will have their share of players missing in this game, including starting LT Taylor Lewan, star edge rusher Harold Landry, team sack leader Denico Autry, and slot corner Elijah Molden.

Here are the Eagles' and Titans' inactives, with analysis.

• DE Robert Quinn: Quinn has two tackles and 2 QB hits in 5 games with the Eagles. He was a late addition to the injury report with a knee injury.

• CB Josh Jobe: Jobe is healthy once again, but remains inactive on gameday.

• TE Dallas Goedert (IR - Week 11): Goedert has 43 receptions for 533 yards and 3 TDs, and has been one of the most efficient pass catchers in the NFL the last two seasons, in addition to his above average blocking skills. He is a top five type of tight end with no obvious flaws in his game who rarely comes off the field. The Eagles have missed Goedert in their two games without him, as there has been a pretty obvious dropoff from him to the trio of Jack Stoll, Grant Calcaterra, and Tyree Jackson, as expected.

• S Chauncey Gardner-Johnson (Week 13): Gardner-Johnson lacerated a kidney in the Eagles' win over the Green Bay Packers last Sunday night. He will miss a minimum of four games (Titans, at Giants, at Bears, at Cowboys). Earlier this week we spoke with a urologist, who explained the unpredictability in pinning down precise timelines for recovery from kidney injuries. The Eagles evidently felt that Gardner-Johnson would not be healed in time for the team's trip to Dallas on Christmas Eve.

Undrafted rookie Reed Blankenship filled in for Gardner-Johnson against the Packers. He showed some good, and some bad (more good than bad) in that game, in case you missed our breakdown of him from earlier this week. We're going to get to know Blankenship well over the next month.

• CB Avonte Maddox (IR - Week 10): Maddox is the Eagles' starting slot corner. He was replaced in the lineup by Josiah Scott, who the Commanders, Colts, and Packers have successfully attacked with their best receivers the last three weeks.

The players ruled out due to injury:

• DE Denico Autry: Autry is a big, powerful 6'5, 285-pound DE who is stout against the run and leads the Titans with 7 sacks. This is a big absence for the Titans.

• CB Elijah Molden: Molden is the Titans starting slot corner, and they are already missing second-year CB Caleb Farley, as noted below. The Eagles were already going to have some favorable matchups with their receivers against the Titans' secondary, and now even more so.

• WR Cody Hollister: Hollister is a 29-year-old, 6'4 receiver with little production over his six-year NFL career.

And the rest of the Titans' inactives:

• LT Taylor Lewan (IR - Week 3): Lewan is the Titans' starting LT, and a three-time Pro Bowl player. He tore an ACL Week 2, and his season is over. Dennis Daley has filled in at LT for the Titans.

• LB Zach Cunningham (IR - Week 10): Cunningham injured his elbow Week 9 against the Chiefs, and was placed on IR. He is a starting linebacker for the Titans who had 24 tackles in five games this season.

• CB Caleb Farley (IR - Week 10): Farley has a herniated disc in his back, and his season is reportedly over. He was a first-round pick of the Titans in the 2021 draft, but was a reserve corner for Tennessee this season.

• LB Ola Adeniyi (Week 6): Adeniyi is a rotational pass rusher who had 21 tackles and 2.5 sacks in 2021. He has only played 41 snaps in the regular defense this season.

• WR Kyle Philips (Week 7): Philips was a preseason star for the Titans, who has had 8 catches for 78 yards in the regular season.