Jason Peters has no problems mentoring Andre Dillard, the guy who will likely replace him 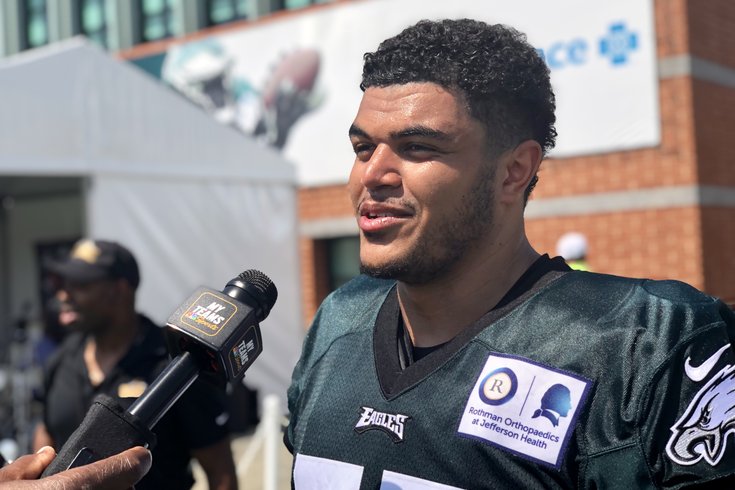 One day in the not-so-distant future, Jason Peters will be in the Hall of Fame. The Eagles starting left tackle is 37 years old and has dealt with serious injury in recent years, but he doesn't plan on calling it quits any time soon — he wants to keep playing as long as his body allows him. But when that day comes and he finally calls it a career, Peters wants to make sure he leaves the Eagles — and specifically quarterback Carson Wentz — in the safest possible hands.

That's why Peters has been mentoring first-round pick Andre Dillard, the guy who is most likely to replace him as the protector of Wentz's blindside. Playing the role of the teacher is nothing new for Peters, who has mentored other offensive linemen in the past, most recently Jordan Mailata. But what makes this situation different is that Peters is grooming a guy in whom the Eagles have invested quite a bit and could who could take his job sooner rather than later.

"No, it don't bother me none," Peters said following Friday's practice. "At some point, you're going to get replaced anyway, so you might as well help out the guy."

Rather than back off and let Dillard learn on his own, Peters says he's spending even more time with the young rookie.

"Yeah, because I've got to give my knowledge to him," Peters added. "And whenever I leave [football], I'll leave it to him. Because you know how hard you all [writers] are on the left tackle. [laughs]"

According to Dillard, it hasn't just been Peters who's been helping him along so far this summer. It's been all the veterans. And it's helped the 23-year-old lineman adjust to life in the NFL.

"They really took me under their wing, the older guys on the O-line," said the former Washington State star. "I've learned so much from coaches here and the players here in such a short amount of time compared to the rest of my life playing ball. This is where I'll become the best that I can possibly be."

Dillard said he's already noticed that it's a different level of play going from college to the pros, but the lessons he's learned from Peters and Co. have him feeling like he's grown as a player, more than he ever has in his career.

"I think this is my biggest jump as a player that I've made in my whole life, from rookie minicamp until now," Dillard said. "That's arguably one of the biggest jumps I've made in football."

And Peters has played a huge role in that.

"He'll take me aside after a bunch of drills — like if he sees me come out, he'll give me a pointer here or there," Dillard said. "[He'll] tell me to work on this and that. Every chance he got, he would help me out, so I really appreciate that."

Peters, however, doesn't plan on going quietly into the night. The 15-year veteran with nine Pro Bowls under his belt said he's even willing to switch positions if that's what it comes to.

Last season, Peters was coming back from a torn ACL and MCL suffered during the Birds' 2017 Super Bowl campaign. And if it looked like he lost a step, that's like because he did. With another full year between himself and knee surgery, however, Peters feels rejuvenated.

As for Dillard, Peters said he has "good movement, quick feet, and good hands." And after gleaning some knowledge from from one of the best to ever play the position, Dillard will also have a mental edge over some other rookies. Ideally for the Eagles, they'd like Peters to play well this season and stay healthy, allowing them to ease Dillard into the NFL game and providing them some nice depth along the line.

But if for whatever reason that's not the case, Dillard believes that when this team breaks camp, he'll be prepared to step onto the field without missing a beat.

Thanks in large part to Jason Peters.