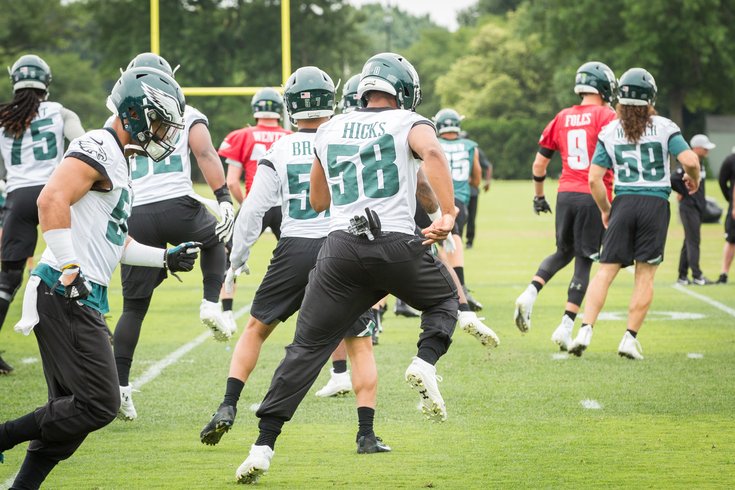 Jordan Hicks during OTAs at the NovaCare Complex.

Today we'll take a look at the linebackers.

In 2017, after a slow start to the season while he was playing with an ankle injury, Hicks tore his Achilles. He placed some of the blame on his Achilles tear on his bum ankle, as he was overcompensating for it.

Going back to his days in college at Texas, Hicks has suffered season-ending injuries in four of his last six seasons:

When he's healthy, there's no question that Hicks is a very good player, but as even he acknowledged, it's merely a matter of whether he's able to stay on the field.

When Hicks was lost for the season with a ruptured Achilles in 2017, Bradham instantaneously became the most solid and trustworthy linebacker on the roster. He took over Hicks' role of relaying the play calls from Jim Schwartz to the rest of the defense.

Bradham signed a five year contract with the Eagles this offseason worth $40 million. A quick look at his numbers during his two years so far in Philly:

In June, discipline (finally) came down from the league as a result of Bradham's legal issues, stemming from the "cabana boy incident." It was a one game suspension, which in my view is a modest punishment that the Eagles should be able to navigate rather easily.

Nelson is undersized at 6'1, 226, but he has good speed. In 2016, he had 67 tackles and 5 pass breakups, and is regarded as being good in coverage, which is something that Jim Schwartz prioritizes in his linebackers.

According to an interesting tweet by Nicki Jhabvala of The Denver Post, Nelson signed in Philly over Denver to take on a "larger role."

The Broncos, I'm told, matched the money Corey Nelson will recieve in Philly. But Nelson wanted a larger role. At the start of last season, Vance Joseph said he considered Nelson a starter, much like Bradley Roby as the third corner.

Nelson is a candidate to take over Mychal Kendricks' role in the defense as the third linebacker, but the team has been steadfast in their message that that role will be earned in camp.

Gerry was a fifth round pick of the Eagles in 2017, and he failed to make the final 53-man roster. After clearing waivers, Gerry rejoined the team on the practice squad for the first six weeks of the season, before being promoted to the active roster after Hicks went down.

Gerry only played 20 snaps on defense last year, but he was a heavy special teams contributor, getting on the field for 181 special teams snaps, per Football Outsiders.

Gerry played safety in college at Nebraska, where he was something of a ball hawk, picking off 13 passes his last three years there. In the same way that Schwartz likes his safeties to have some cornerback in their backgrounds, the same can perhaps be said that he views it as advantageous if his linebackers have some safety in their backgrounds. Gerry will compete with Nelson and Kamu Grugier-Hill for the starting job.

Like Gerry, Grugier-Hill was a safety in college who converted to linebacker in the NFL. Interestingly, the physical measurables Grugier-Hill posted at his pro day are similar to Mychal Kendricks' NFL Combine performance.

Grugier-Hill was built more like a big safety when he entered the league, and has since put on weight. He is now listed at 220 pounds. Still, the point here is that Grugier-Hill, like Kendricks, is something of an athletic freak.

Recently, I watched Grugier-Hill in the Eagles' 2017 finale against the Dallas Cowboys, in which the Eagles played their second- and third-stringers. I came away feeling like Grugier-Hill wasn't lost at all. He looked like a legitimately capable linebacker to me. (We'll have a cutup of Grugier-Hill in that game soon.)

I believe that he has a chance to win that third linebacker job.

Walker has dealt with an assortment of injuries in his time with the Eagles, as he has landed on IR in each of the last two seasons. In 2016, it was a torn ACL suffered during training camp. In 2017, it was a neck injury suffered late in the season.

After Hicks went down last year, Walker was given an opportunity to start, and he just didn't play very well, even with the Eagles dominating their opponents. Walker's chances of making the team rose when Paul Worrilow was lost for the season with a torn ACL, but he still has his work cut out for him.

Including the playoffs, Reynolds has appeared in 73 games with the Jaguars and Falcons, mostly as a special teams guy. He'll turn 28 during the season, and should push Walker for a roster spot.

Like Grugier-Hill and Gerry above, Brown is another college safety who will play linebacker in the NFL under Jim Schwartz. Brown was a three-year starter at Western Michigan, during which time he posted 296 tackles (18 for loss), 4 INT (including a pick six), 6.5 sacks, 10 pass breakups, and 4 forced fumbles. The Eagles list him at 6'0, 215.