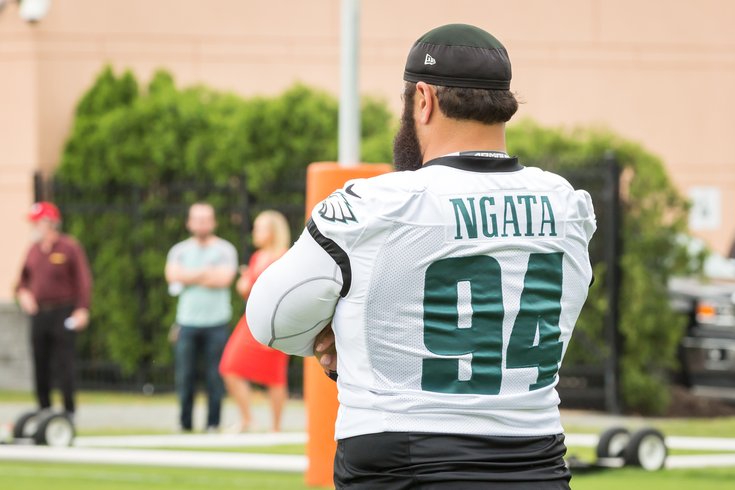 Haloti Ngata during OTAs at the NovaCare Complex.

Today we'll take a look at the defensive tackles.

Cox is the best player on the Eagles' defense, and the focus of opposing offensive game plans, as he often draws double teams from his interior defensive line spot. Cox's stats aren't eye-popping (26 tackles, 5.5 sacks in 2017), but his mere presence opens up opportunities for the rest of the front seven to make plays.

Jernigan's 2017 season started off very strongly, as he created disruption on the interior of the line next to Cox. As a result, he earned a lucrative contract extension mid-season, but he faded down the stretch. After suffering a "non-football injury" during the offseason, Jernigan was in danger of being released by the team, but he instead merely lost some guarantees.

Jernigan is currently recovering from back surgery, and is expected to be out until roughly November.

As we noted back in January, Howie Roseman cashed in on a soft "old guy market" last offseason, when the Eagles signed aging players, like Chris Long, Corey Graham, Patrick Robinson, and LeGarrette Blount. That strategy paid off big time, as all four players made significant contributions to the Eagles' Super Bowl season. That strategy carried over into 2018, as Ngata turned 34 in January, and DE Michael Bennett turns 33 in November.

The Eagles needed defensive tackle depth with the loss of Beau Allen in free agency, and Jernigan's back surgery. At 6'4, 340 pounds, Ngata should fill Allen's role as a run-stuffing defensive tackle in the middle of the Eagles' defense. A season ago in Detroit, the Lions allowed 74.6 rushing yards per game in games Ngata played. They allowed 129.7 rushing yards per game with Ngata out.

Ngata did not participate in spring practices, as he was still recovering from a torn biceps injury suffered Week 5 of the regular season last year.

The primary backup to Cox and Ngata, assuming Ngata will be ready to start Week 1, is currently Destiny Vaeao, a player who the Eagles had inactive down the stretch last season, and doesn't offer any obvious plus traits. Vaeao was getting first team reps during spring practices, which makes the Eagles' depth at defensive tackle somewhat alarming.

Qualls has a run-stopper build at 6'1, 321. He appeared in six games last year, making four tackles. To be determined if he can overtake Vaeao for rotational snaps to give guys like Cox and Ngata the occasional rest.

Hector is an interesting find. In three seasons (31 games) at South Florida, he had 18 sacks, an outstanding total for an undrafted defensive tackle. Surely a part of the reason he wasn't drafted was because of his smaller size at 6'2, 296, but he fits the mold of an upfield, penetrating interior defensive lineman that Jim Schwartz wants.

His highlight reel is worth a quick look:

Because the Eagles have defensive ends like Brandon Graham and Michael Bennett kicking inside to defensive tackle on obvious passing downs, it will be difficult to justify a roster spot for Hector as a pass rushing interior defensive lineman, but he could be an interesting player worth developing on the practice squad if he shows ability in camp.

The Eagles have Shittu listed at DE, but that's probably just a mistake on their website. Interestingly, Doug Pederson mentioned Shittu as one of six players who stood out during spring practices.

"I went into this off-season wanting to look at a lot of our younger players, obviously, from a year ago. I think guys like Rashard Davis and Greg Ward come to mind, Shelton Gibson come to mind, that have had really good springs.

"Even on the defensive side, Rasul Douglas, who played some last year but has sort of emerged himself this spring, has done a really nice job.

"You look at some of the draft picks, Dallas [Goedert], obviously, is going to be a nice fit for us as a tight end. I think these guys have really sort of embraced what we're teaching, what we're coaching. They have to get used to it. It's a little different for a lot of these guys.

"I'm thinking of -- even Shittu, who came back from an injury a year ago, has had a really nice spring.

"So going into camp, we're in a good spot with a lot of our younger players, and it'll be interesting when we, again, put the pads on."

Craig is a second-year guy who was released at 53-man cutdowns last year, sat out most of the season, and was added to practice squad Week 14. He's probably just a camp body.