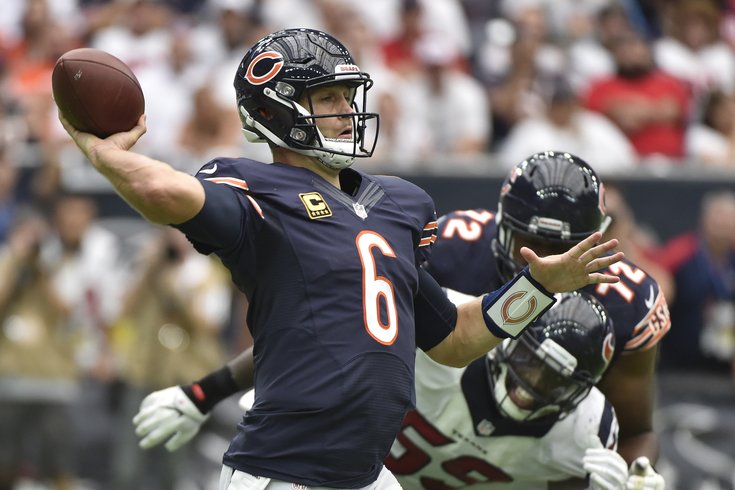 The Bears are the second flawed opponent the Eagles will face.

After starting off 2016 in style by easily handling the lowly Cleveland Browns, the Philadelphia Eagles have a chance to go 2-0 against another flawed opponent, the Chicago Bears. Here are five matchups to watch.

The Bears failed to get pressure on opposing quarterbacks in 2015, hence their urgency to trade up for edge rusher Leonard Floyd in the 2016 NFL Draft. Their lack of pressure has also hurt their ability to force bad throws, as they had just eight interceptions a season ago. That's one more than Kurt friggin' Coleman had in 2015.

The Eagles really couldn't have asked for a better pair of opponents to face to get their rookie quarterback's feet wet.

2) Alshon Jeffery vs the Eagles' CBs

The Bears' best weapon offensively, by far, is Alshon Jeffery. Barring injury, Jeffery is probably good for 1200+ yards this season. The Eagles, meanwhile, will likely be without CB Leodis McKelvin, which means that rookie seventh-round pick Jalen Mills will see quite a bit of playing time. Expect the Bears the find ways to get Mills lined up on Jeffery.

Mills won't be intimidated. He faced Odell Beckham Jr. and Jarvis Landry every day in practice at LSU, and played against the following long list of drafted receivers during his college tenure:

In the Eagles Week 1 game against the Browns, 37.5% of the Browns' offense came on two deep throws to Terrelle Pryor and Corey Coleman. The Bears love to get Jeffery deep down the field where he can use his size to box out opposing defensive backs and high-point catches. Jeffery will be a big challenge for Mills and the rest of the Eagles' secondary.

3) The Eagles' edge rushers vs the Bears' OTs

The Bears do not have good offensive tackles. At LT, they have 2014 seventh-round pick Charles Leno, who began 2015 as a reserve but ended up starting 13 games. At RT, the Bears have Bobbie Massey, who got beaten like a rented mule a few times last week against the Houston Texans on speed rushes.

A week ago, the Eagles' pass rush got off to a painfully slow start, but began applying consistent pressure in the second half. This is a matchup that the trio of Connor Barwin, Brandon Graham and Vinny Curry should win, but they'll have to get it going a little more quickly than they did in Week 1.

On a side note, the Bears are starting rookie Cody Whitehair at center. Whitehair was a versatile offensive lineman at Kansas State a year ago, where he most recently played LT. He and Jay Cutler had a fumbled exchange a week ago.

4) The Eagles' young receivers vs the Bears' young secondary

The defensive backs covering the Eagles' receivers are also very young. Tracy Porter is the lone old head, at 30 years of age. Beyond Porter, the Bears cornerbacks playing the most snaps Week 1 were Jacoby Glenn (23), Bryce Callahan (24), and Deiondre Hall (22). Their safeties are Adrian Amos (23) and Harold Jones-Quartey (23).

5) Jay Cutler vs 'the big mistake'

In the Bears' Week 1 loss to the Texans, WR Kevin White did not run the route that Cutler was expecting, and Cutler threw a pick. As he's wont to do, Cutler kinda/sorta showed up his receiver.

The reality is that Cutler is prone to big mistakes. Of all active NFL starting quarterbacks, Cutler has the second highest career INT percentage, throwing interceptions on 3.24 percent of his passes over his 10-year career. That's second only to the Jets' Ryan Fitzpatrick.

If the Eagles can get a good pass rush against the Bears' suspect offensive tackles, they can force Cutler into mistakes.