The best game I ever attended: Nick Foles thrills in the NFC Championship Game 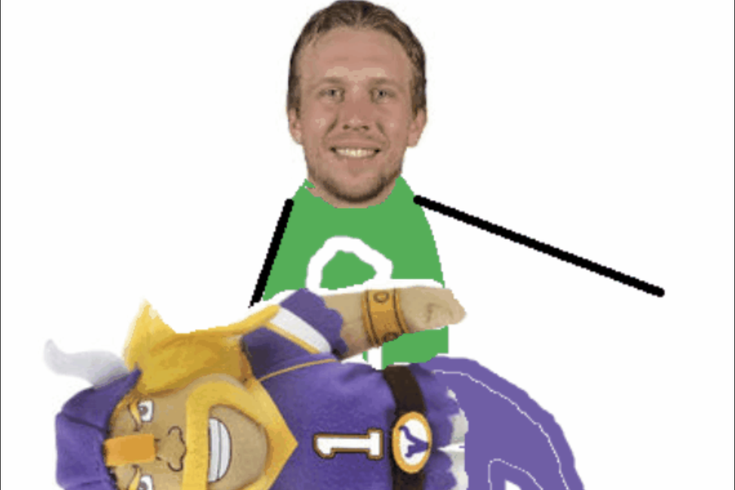 I had attended dozens of Eagles games in my life. I had watched a couple hundred on television. I had seen every moment of optimism come crashing down upon me, every dream turn into a nightmare and every which way a team could lose a game they should've won.

The Eagles had run me through the gauntlet in my young life, as had been the case for Eagles fans decades older than me as well. On January 21, 2018, I took my usual spot in the top level of Lincoln Financial Field. The Birds had squeezed out a win the week prior against the Falcons, but now the Vikings came to Philly, yet another team favored in the Eagles' own home. The Vikings had just completed the Minnesota Miracle against the Saints when they rolled up to the Linc for the NFC Championship Game. Minnesota was hosting Super Bowl LII. They essentially had "Team of Destiny" written on the front of their helmets.

As that matchup started, I felt like my destiny to watch the Eagles break my heart over and over again in Sisyphean torment was unfolding. On the game's first drive, the Vikings marched down the field with ease and Case Keenum hit Kyle Rudolph for a quick touchdown. When the Eagles got the ball next, they ran just four offensive plays before punting. As Minnesota got the ball back, visions of Ronde Barber, Ricky Manning Jr. and Larry Fitzgerald danced in my head. Making matters worse than all those crushing NFC Championship Game losses of my youth was that I was actually in the building. I would walk home in shame afterwards, wondering where it all went wrong, resigned to the fact that I would never see the Eagles win the Super Bowl, nor would all the people I love.

A drop of a pin could've been heard at the Linc. Every Eagles fan in attendance knew they had seen this game before. Something happened though. Chris Long and Patrick Robinson happened.

While his stint with the #Eagles was short lived. This moment will live for eternity in Philadelphia.

Long, a free agent signing who became an instant fan favorite, just, just, just got his hand on Keenum's arm in time to cause an errant throw. Supremely underthrown, the ball landed in the arms of Robinson, a nickel cornerback who was almost cut in training camp. Robinson scampered all over the field before finding his way into the end zone, a miraculous turn of events for a fan base that assuredly thought they were doomed.

I started the play in row 9, seat 6 in one section and I think I ended up in row 12 in another by the time Robinson's teammates joined him in celebration. It was like being in a mosh pit at a concert at the First Unitarian Church. It was the loudest I've ever heard a sporting event. The stadium was shaking. People were grabbing people they didn't even know by their Brian Dawkins jerseys and screaming and cheering in their faces and going arm-in-arm as if they were family members. I was surrounded by my father, a handful of my closest childhood friends and 67,000 new best friends.

We all acted like the game was over even though the Birds had only tied things up 7-7. In a way though, it was over. 67,000-plus well-lubricated Eagles fans who had been to hell and back for this team just got a taste of what the Promised Land was like. There would be no relinquishing of that. The entire Eagles team essentially got a whiff of smelling salts. They, along with all those fans who prayed and said they would do anything for Lombardi Trophy, elevated to another plane of existence.

I ran through all my most painful sports memories last week for "Worst Week" and now I get to gloat and ride high for "Best Week." I did "Worst Week" first for a reason and that NFC Championship Game is a perfect example of why.

Eagles fans both young and old had watched the football world kick their teeth in way too many times, had football glory dangled in front of their face only for it to be slightly out of reach. All that sucked terribly growing up, but being hardened from all of that made the eventual triumph that much sweeter.

Even for all the times I can resemble Eeyore, I liked to say, "This'll make them winning the Super Bowl that much better," whenever things went bad for the Eagles. My friends would naturally say, "STFU, Shame," but it was true. If you didn't suffer through the wasteland of the '60s and '70s, the unfilled promise of the Buddy Ryan era or all those playoff disappointments under Andy Reid, would you have cared so much and been so happy when they won the whole damn thing? No, you wouldn't have. Yes, life would've been infinitely easier if the Eagles simply won the Super Bowl, but this was the hand Philly sports fans were dealt for decades. When you finally drew four aces, it was as if you reached the heavens.

As the Eagles' rout of the Vikings ensued, I remember turning to my buddy Joe and saying, "We could be literally anywhere in the world doing anything and I'd rather be right here, right now than doing any of that." That level of contentment, whether it'd been in my personal, academic, professional or romantic life, had never been felt for me at 23-going-on-24 that evening. I was on top of the world. I could've fought a pride of lions with my own two hands. Even with an infinite amount of Miller Lites in my gut, I could've climbed Mount Everest. I would've slayed a dragon with nothing but this gigantic dog bone: 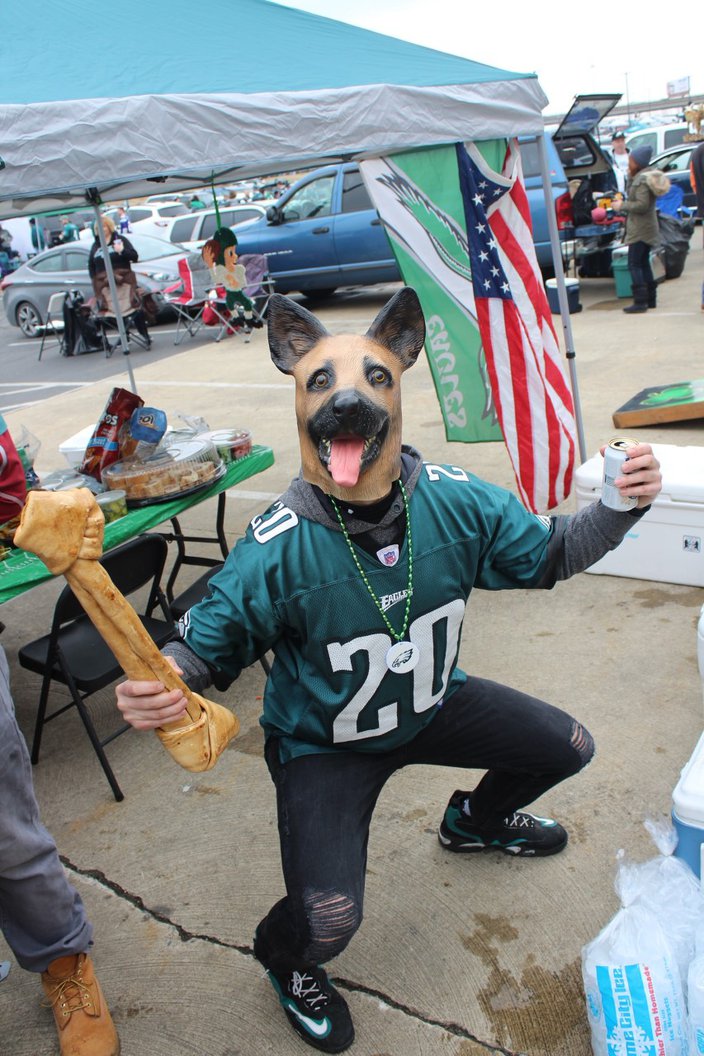 What else happened that night on the way to a dominating 38-7 Eagles win? Let me run through moments both for the Birds and me:

• LeGarrette Blount put Vikings safety Andrew Sendejo on his ass as he stormed into the end zone. There should've been a chalk outline for Sendejo on the field.

LeGarrette Blount plows his way through Andrew Sendejo for a touchdown to take the lead against the Vikings in the 2017 NFC Championship Game. pic.twitter.com/GzeswWOPn0

• I'm not a religious man, but what explanation is there for Nick Foles' run that postseason other than God coming down and touching his right arm? On that night, Foles threw for 352 yards and three touchdowns while completing 78.8 percent of his passes with a quarterback rating of 141.4. You'd have been hard pressed to find someone more crestfallen about Carson Wentz's injury than me, but even I couldn't imagine MVP-level Wentz playing any better than Foles did that night. It was like a pitcher in the middle of a perfect game. The dude was just in a zone that few other quarterbacks had ever inhabited. Foles slung the ball with zero fear. That throw to Torrey Smith on that flea flicker touchdown? Are you serious? He was making throws that just had you shaking your head with the biggest possible grin on your face, in total disbelief that you were actually witnessing this.

• The SKOL chant. OMG, the SKOL chant. Vikings fans do this "SKOL" chant and smack their arms above their head for their squad. Eagles fans started doing that, but were saying "FOLES" instead. Do you know how absolutely humiliating that must have been if you were from Minnesota? Listen, I had watched other teams across all the sports embarrass Philly over the years. It was nice to be on the other side of things for once. Tens and tens of thousands of people stole your fan base's hallmark and made it their own while celebrating the man who ended any thought of the Vikings being the "Team of Destiny." Being a cocky Philadelphian never felt so rewarding.

• People were wearing dog masks all over the stadium. I had one. I couldn't see anything while wearing it, but I felt like Daredevil where I had special radar and my senses were heightened with the roar of the crowd. Putting it on during the renditions of "Fly Eagles Fly" had me ready to take down the Kingpin's criminal empire.

• "Anyone could've gotten it that night."

Anyone could’ve gotten it that night https://t.co/Rwp7K3yZ4v

I wrote last Monday about walking home from the worst game(s) I ever attended in complete silence. This night? I strutted down Broad Street like I had just won the power ball. I was with a gigantic crew of people who didn't have a care in the world after that absolute throttling. I thought back to that specific walk home in 2011. There had never been a more stark difference in my mood.