The small quake registered 1.6 magnitude and was given a 'community determined intensity' rating of 4 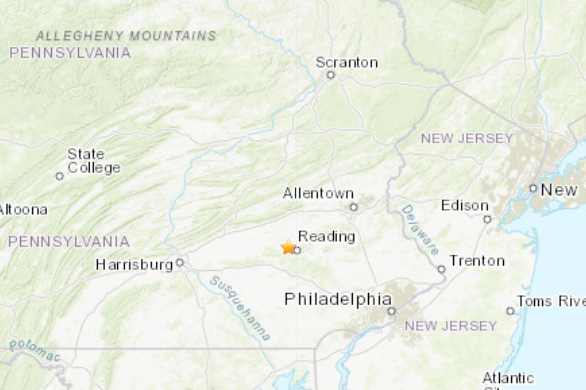 A small earthquake rumbled through parts of Berks County, about 50 miles west of Philadelphia, on Sunday night, according the U.S. Geological Survey.

The 1.6-magnitude earthquake occurred at 10:51 p.m. in Wyomissing Hills with a point of origin more than 3 miles below the earth's surface. The quake's weak intensity didn't even earn it a spot on the USGS' main map for earthquakes in the U.S., which is a collection of earthquakes registering magnitudes of 2.5 or higher.

After receiving 80 reports from people in the area, USGS determined there was a "community determined intensity" of 4, on a scale from 1 to 10. That translates to residents feeling light shaking but no damage being reported.

A resident posted this short note about the earthquake to the Wyomissing Neighbors Facebook group: "10:50 p.m. Did we just have an earthquake?"

The comment received 63 responses from people in the community, detailing where they felt it. Some residents responded that it sounded like an explosion or a large boom.

This isn't the first earthquake to strike in in Berks County this year.