East Market: First look at the apartments inside The Ludlow 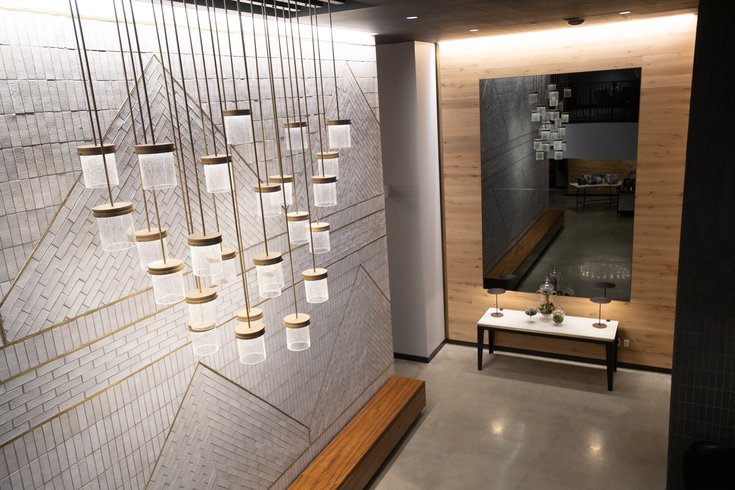 Years of meticulous planning are finally coming to fruition in Philadelphia's Market East neighborhood, where a generation witnessed the decline of The Gallery and wondered what it would take to revive the area.

The first ambitious piece of that puzzle is The Ludlow, an 18-story tower that serves as the signature of National Real Estate Development's East Market project.

East Market will eventually encompass 4.3 acres in Center City, stretching three full blocks from 11th to 12th streets and Market to Chestnut Streets. The mixed-use project, packed with a roster of impressive tenants and local firms, introduces residential life to this portion of Market Street for the first time in recent memory.

At the one-time site of the Snellenberg's department store, The Ludlow stands out for its bold digital signage fronting 11th and Market streets. The suddenly dynamic corner ushers the whole block into an active spirit more attuned to Midtown Village's downtown atmosphere.

"I think we really have the most sophisticated digital media going," said Michael Prifti, principal at BLT Architects, which designed the property. "We were very calculated about the way it presents itself, deliberately choosing a corner and having messaging that is both in community service, as well as for the tenants in the building." 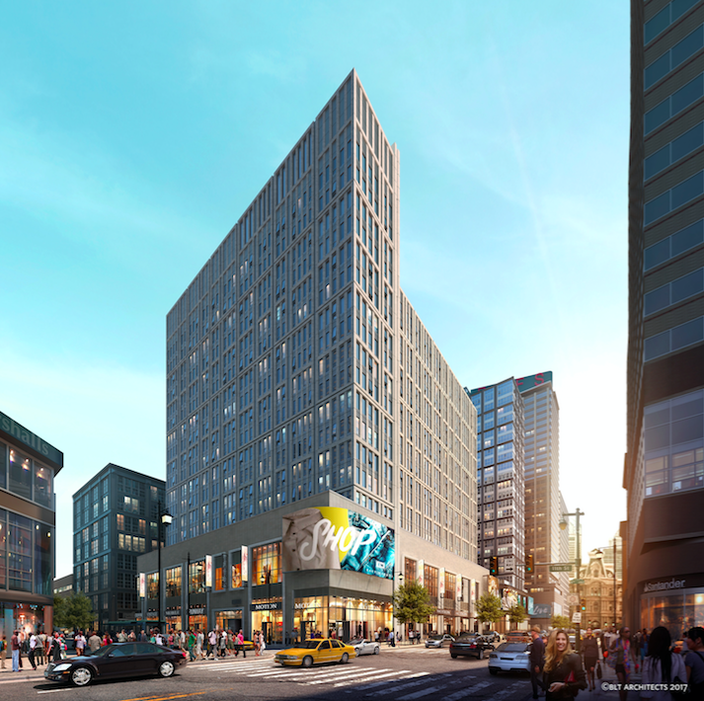 Rendering of The Ludlow, located at 1101 Ludlow Street.

East Market represents part of a larger neighborhood revitalization alongside Fashion District Philadelphia, PREIT's answer to the shopping vacuum left by The Gallery. The idea is to create a residential community around what figures to be an entertainment and retail district complete with an eight-screen AMC movie theater.


The two projects are friendly competitors, both looking to give the area a new identity in line with the Philadelphia that left it behind.

"We're all feeding off each other," said Charles Norman, development manager at National Development. "What they're doing is only going to make our product look better and what we're doing is definitely going to benefit them."

A tour of The Ludlow this week revealed a finely designed residential community with a flair for quality materials, appliances, amenities and sunlight. 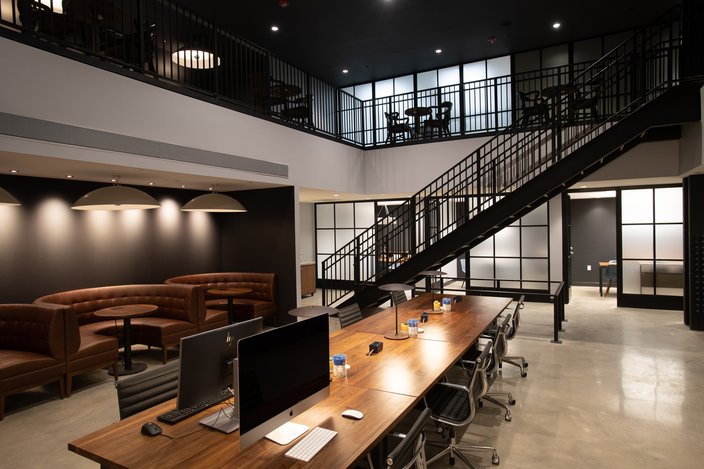 The residential portion of the building contains 322 units — studios, one- and two-bedroom apartments. All of the units contain wood flooring, quartz countertops with custom Italian cabinetry, gas cooking ranges and floor-to-ceiling panel windows.

Select apartments have terraces and balconies, while all of them have in-unit laundry and closets equipped with Elfa Storage systems. 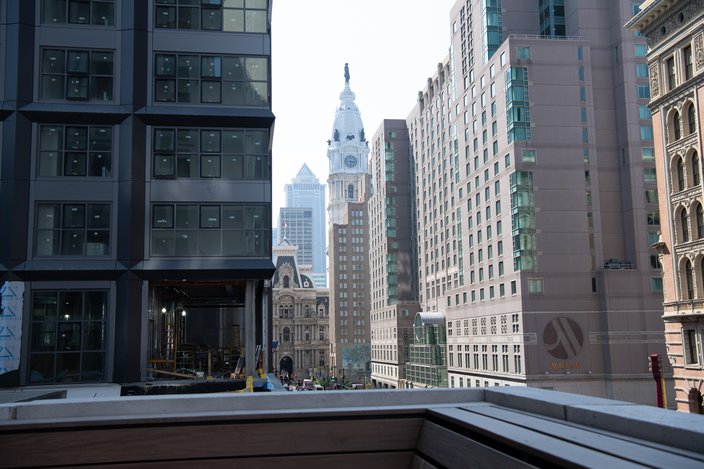 Views of Center City from an apartment terrace.

Apartments at the Ludlow aren't the most spacious in the city, but they offer open-concept floor plans and an environment suited for cozy minimalism and practicality. Studios ( The Ludlow will have 30) range from 516 to 522 square feet and start at $1,770 per month. The 28 junior one-bedrooms are between 571 and 586 square feet, beginning at $1,920. 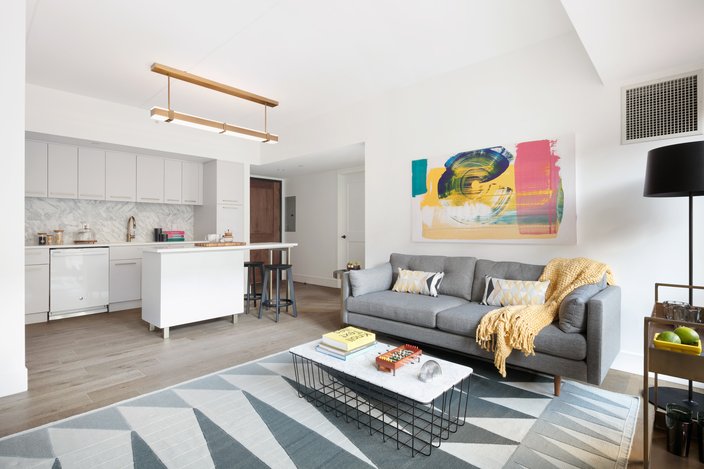 The living room of an apartment at the Ludlow East Market.

The majority of the 234 apartments at The Ludlow are one-bedroom units ranging from 512 to 803 square feet (the photographed model unit is 642 square feet). 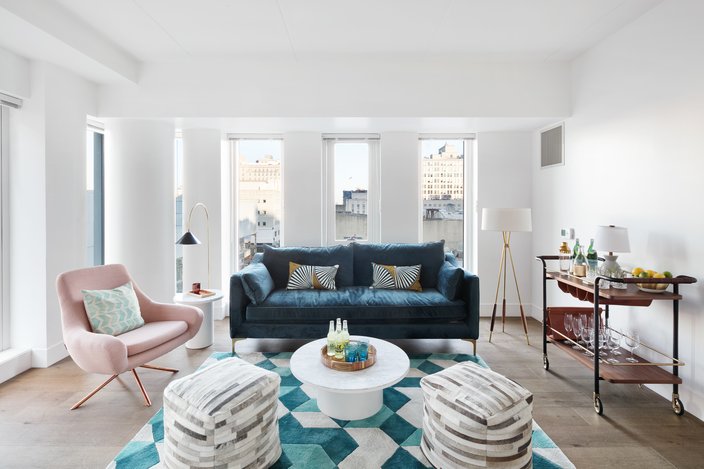 The living room of an apartment at the Ludlow East Market.

Views from the top floor units offer an uncommon view of the Delaware River and the Benjamin Franklin Bridge from this part of Center City. 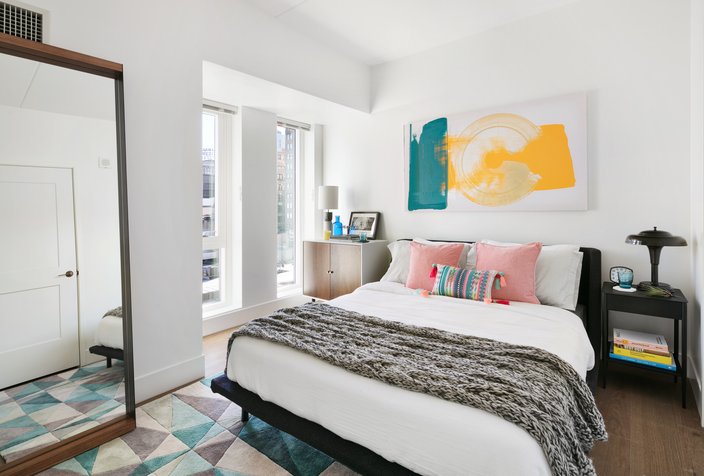 The bedroom of an apartment at the Ludlow East Market.

The Ludlow's interior design was done by New York-based K&Co, which set out to capture Philadelphia's status as a city of firsts.

"There was just a level of ingenuity, craft and honesty of material that we wanted to have," said K&Co founder Krista Ninivaggi. 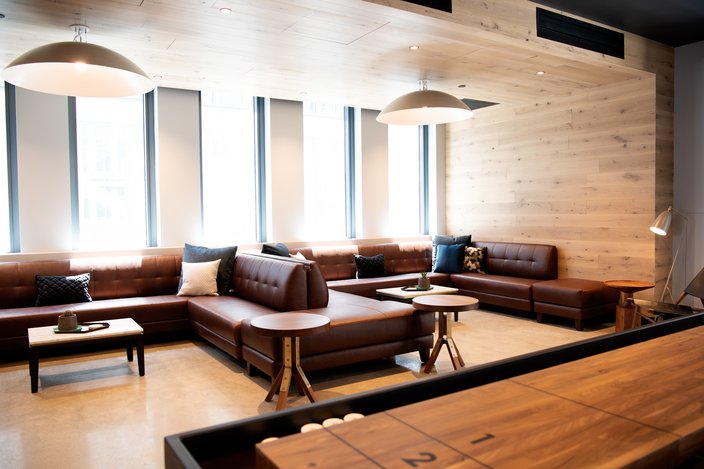 The third-floor resident lounge with large-screen TVs and gaming stations.

A shared amenity space features a dinner table whose custom overhead lighting is inspired by the design of Benjamin Franklin's glass armonica. Several other design elements in the lobby and elsewhere play on Franklin's battery model. 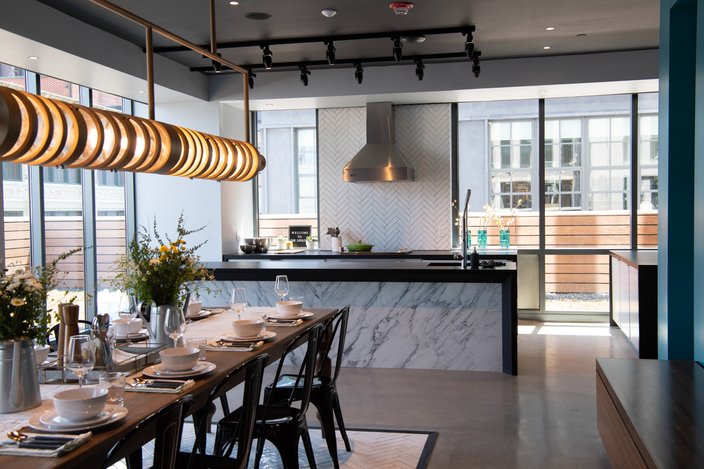 Available to all residents, the amenity space includes a full kitchen, pool and shuffleboard tables, a TV lounge and a vast outdoor terrace with grills, fireplaces and chairs in the heart of the East Market community.

Ninivaggi said the full amenity space is designed to give residents a place to host larger gatherings and dinner parties with a nominal reservation fee. 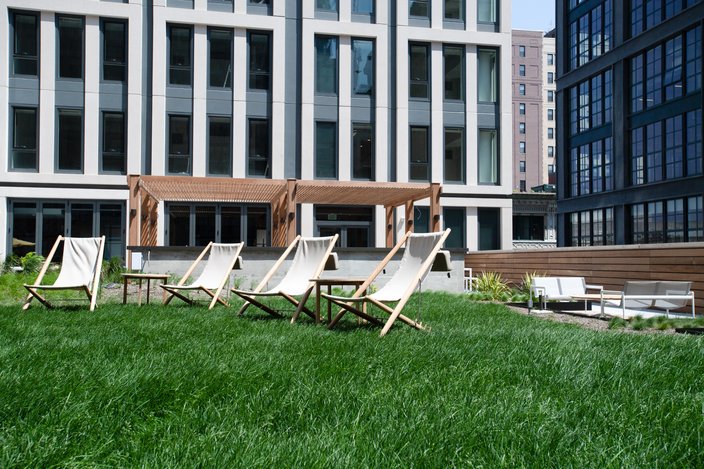 Grass covers a portion of the outdoor terrace. 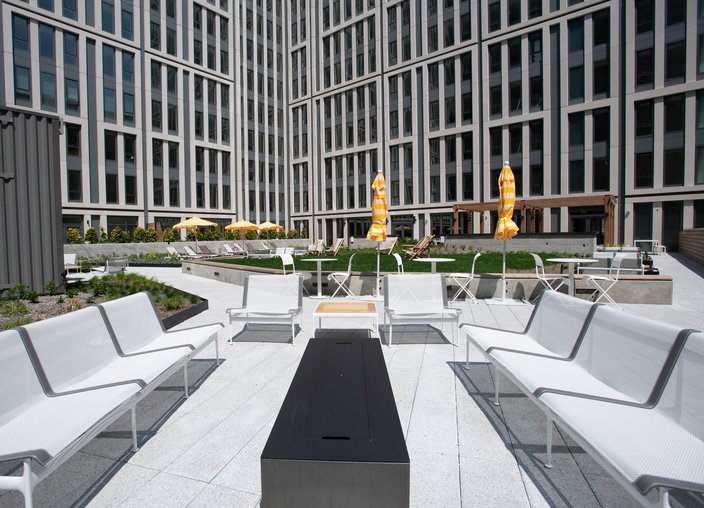 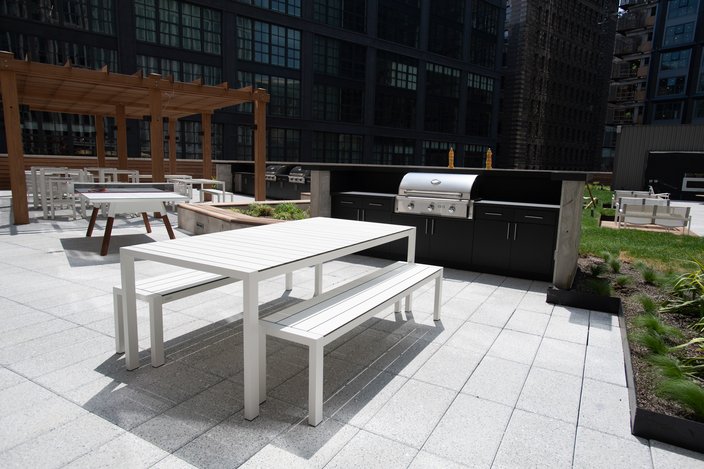 Early leases show The Ludlow will be popular among Philadelphia's Eds and Meds population, which will get another annual infusion during the busy move-in month of June.


Those who move into The Ludlow this summer will just be scratching the surface of what's to come for East Market. 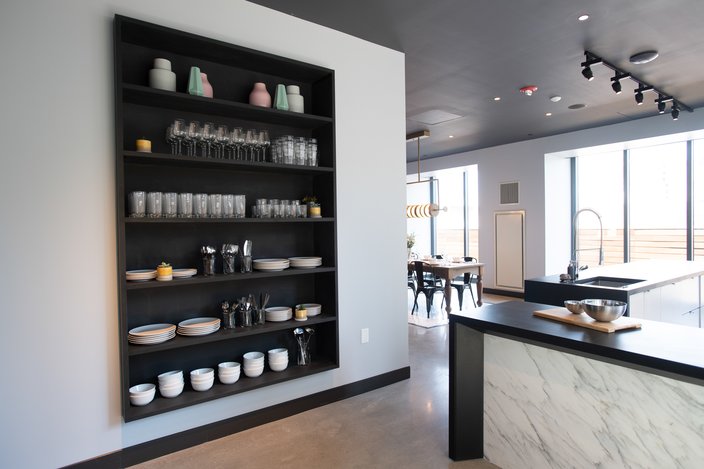 And that's just The Ludlow.


By next summer, National Development will open up the second residential tower, a 20-floor complex with 240 apartments and an extended stay option provided by local firm ROOST Apartment Hotel. Additional plans call for a hotel renovation of the historic Stephen Girard Building on South 12th Street.

For National Development, a subsidiary of pension fund advisor National Real Estate Advisors, East Market is one of several U.S. projects that formed out of the company's desire to manage its own high-risk investments efficiently and create local jobs in construction. Other current projects include The Bloc in Los Angeles and a pair of apartment buildings in San Francisco.

"We want to be involved in cities like Philadelphia, New York and Boston in the Northeast Corridor," said Norman. "We're convenient, we know the markets well, and we can outperform our competitors. Philly is our home base, and we feel really good about doing future work here."

More information about East Market and the apartments at The Ludlow is available on the project's website.