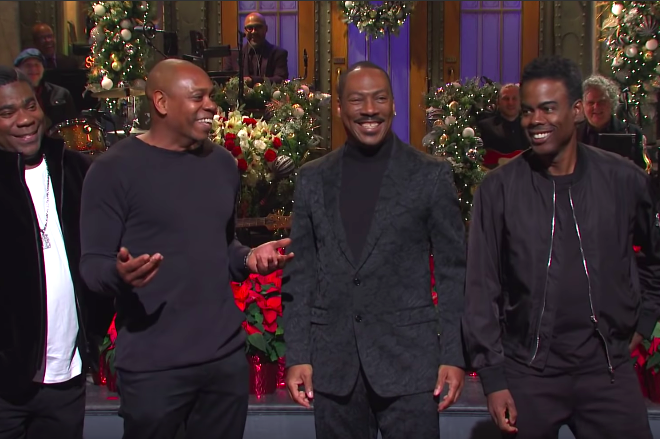 Eddie Murphy returned to 'Saturday Night Live' and roasted Bill Cosby in his opening monologue. Tracy Morgan, Chris Rock and Dave Chapelle then stopped by and joined the comedian on stage.

Eddie Murphy returned to "Saturday Night Live" after a 35-year hiatus on Saturday and if you were hoping he would revive his most classic characters ... well, you are in for quite the treat. Not only did the comedian bring back Gumby, Mr. Robinson, Velvet Jones, and Buckwheat, he brought along some former SNL cast members for the ride.

Murphy, who left the show in 1984 as a comedian superstar, opened his monologue with reference to his past. He showed an old photo of him when he first started on the sketch comedy show and said, "Yeah, I look at least five years younger there, but you know what they always say, money don't crack."

As the fates would allow, Tracy Morgan, Chris Rock, and Dave Chappelle all stop by and join the comedian on the main stage. While they all seem to be a little pre-occupied and curious about the sketches they wrote for him, like Chapelle's T.I. drive-thru gynecology sketch, they also talk about their connection to the comedian.

Chappelle says, "I've followed your blueprint for the entire year. I became the biggest star on television, and then I quit."

Rock notes, "When I got hired, Lorne [Michaels] told me, 'You're gonna be the next Eddie Murphy.' And then a year later, he said, 'No, you're not.'"

Murphy thanked Rock for showing up, to which he replied, "I wouldn't have missed this for the world. My kids love Lizzo."

Watch the opening monologue below.