Disagree? You'll change your mind after hearing what this Ursinus professor has to say about the Bruce Willis holiday classic 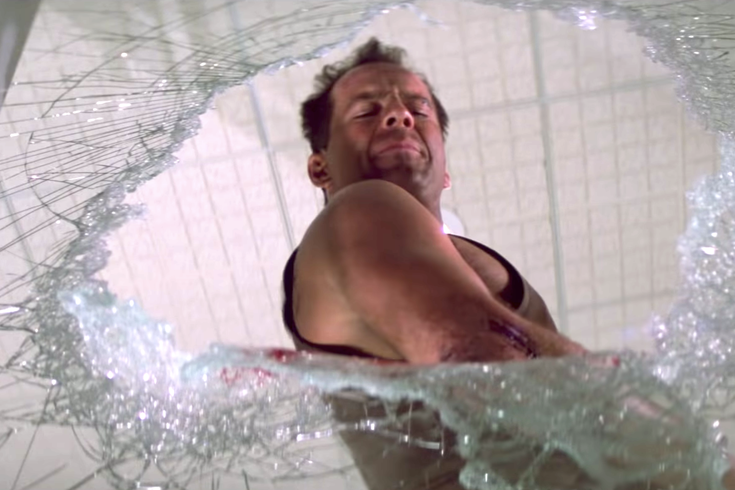 Is 'Die Hard' a Christmas movie? 'Yes, it's a Christmas movie, because it affirms all the values of Christmas,' says Jennifer Fleeger, an associate professor and film studies coordinator at Ursinus College.

Director John McTiernan's 1988 action blowout "Die Hard," starring Bruce Willis as a New York City cop battling bad guys in a Los Angeles skyscraper while looking to reconcile with his estranged wife, was one of the more influential films of the late 20th century.

It launched Bruce Willis' career as a movie star, which led to him appearing in some of the most important Philadelphia movies, specifically M. Knight Shyamalan's "The Sixth Sense," "Unbreakable," "Split" and "Glass."

"Die Hard" spawned four sequels of it's own and countless imitators, such as "Speed" (Die Hard on a Bus), "Under Siege" (Die Hard in a Submarine), and eventually circling back to 2018's Dwayne Johnson vehicle "Skyscraper" (Die Hard, once again, in a tall building).

In recent years, an argument has emerged over whether "Die Hard" should be considered a Christmas movie. Jennifer Fleeger, an associate professor and film studies coordinator at Ursinus College, believes it absolutely should be counted among the holiday classics.

It's an argument Fleeger made again while hosting a "Cinema Classics" seminar called "Die Hard: Not Your Average Holiday Movie," at the Bryn Mawr Film Institute earlier this month.

The seminar touched on many aspects of the action flick, from its cinematic techniques to its representations of American masculinity to its music, which leans heavily on both traditional Christmas tunes and classical compositions.

Fleeger calls the movie "the perfect combination of everything that's great about the movies. It has amazing stunt scenes, incredible setups, a very very very good villain – any remake of 'Die Hard' is no good without a Hans Gruber. So you have to have someone who's pitted against our hero, who is enough like him that we want to connect them or see them as adversaries, but who's different enough that we can re-affirm the American values of our hero in opposition to that."

Willis' character John McClane represents American masculinity, "and how (that masculinity) connected to the idea of the Western individual male hero that he jokes about throughout the movie," Fleeger told PhillyVoice, referring to the film's famous "yippee ki-yay" catchphrase. "So it builds on this whole mythology that we have about what makes an American man, and the independence from any kind of authoritative body like the police or the FBI. He's someone who sort of acts on his own."

Fleeger, who has authored a book on sound and music in historical film, called the music in the movie "amazing." She noted the score is filled with modified versions of well-known Christmas songs, including a repeated motif of bells.

Why has "Die Hard" been so influential over the years, spawning decades of imitators?

"I think the notion that there's a savior who can come to our rescue is something that we want to invest in, because it's a nice narrative: Wouldn't it be great if we didn't have to rely on these institutions, or fund them, and some burly man would just come and save the day, and that'll be great," she said. "I think it's part of an American mythology, that there's always somebody who's witty enough and who's quick enough to know better and to figure out the situation."

The professor is firmly on the side of believing that "Die Hard" is a Christmas movie.

"Yes, it's a Christmas movie, because it affirms all the values of Christmas,"  Fleeger said. "The whole thing is set up as a way to bring the family back together, so obviously that's a big Christmas thing." She adds that Willis' John McClane is a savior, and that his wife (Bonnie Bedelia) is even named Holly.

And Hans Gruber is a villain familiar from yuletide literature.

"Hans Gruber is greedy, he doesn't have a family he's invested in, he's the anti-Christmas character. He's Scrooge, essentially ... ('Die Hard') affirms the negativity of greed. The Scrooge figure doesn't get his money at the end, he falls off a building instead, that's no good." 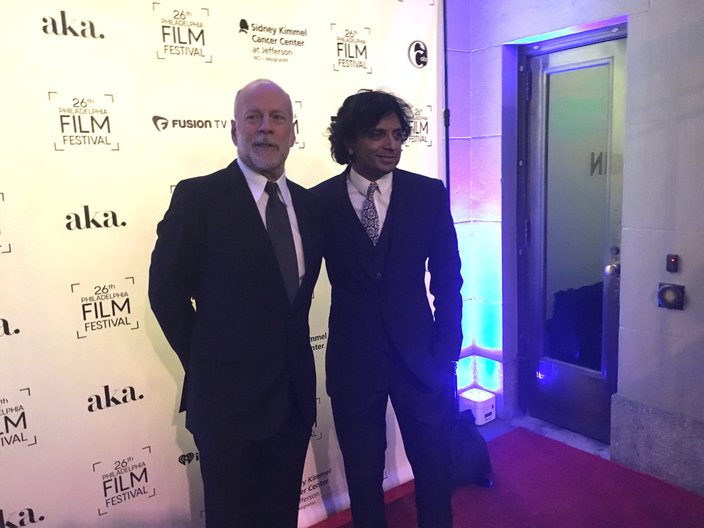 Bruce Willis and M. Night Shyamalan at the Franklin House, where Willis was awarded the 2nd Annual Lumière Award.

Fleeger, at Ursinus, once taught a dedicated course on the cinema of Philadelphia, and while Fleeger thinks of Brian De Palma's "Blow Out" as "the greatest Philadelphia movie," the course had multiple viewings of Bruce Willis films, including "The Sixth Sense" and "Unbreakable."

"I think that he is somebody who we can believe being a working class hero," Fleeger said of the "Die Hard" star, who has been in five different movies shot in Philadelphia. "I think in this city we believe that we work hard, and we know how to solve our own problems. That we're hearty, and feisty, and thinking, and reacting, and (John McClane) does all of those things. So, I think he signals for us I kind of gritty, hard-working figure we can identify with because it's how our city has been represented on film."