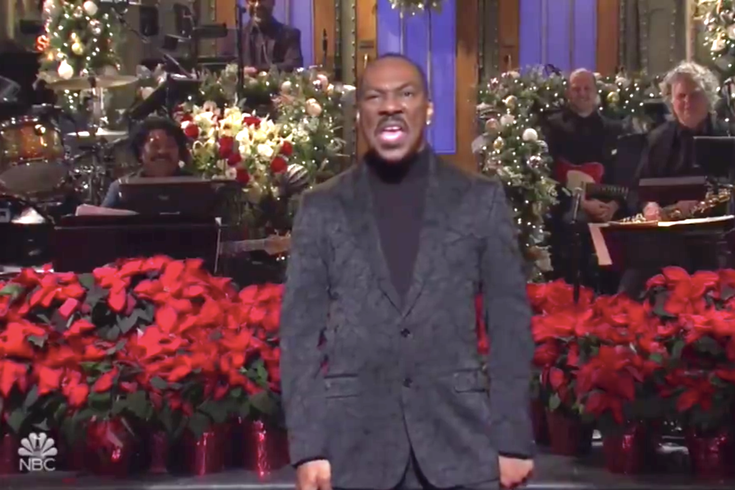 Comedian Eddie Murphy joked about Bill Cosby during the opening monologue of his return to "Saturday Night Live," his first appearance on the program in nearly 35 years. A spokesman for Cosby took issue with Murphy's remarks.

Eddie Murphy's sensational return to "Saturday Night Live" over the weekend drew rave reviews from viewers, but some of his material didn't sit well with a spokesperson for ex-comedian Bill Cosby.

Nearly 35 years had passed since Murphy appeared on "SNL," one of the original launchpads for his illustrious career as a stand-up and actor. During his opening monologue, Murphy impersonated Cosby's Cliff Huxtable character and riffed on the fact that Cosby is imprisoned.

"Who is America's Dad now?" Murphy quipped in a Huxtable voice.

“If you had told me 30 years ago that I’d be this boring, stay-at-home house dad, and Bill Cosby would be in jail ...even I would have took that bet. <Cosby voice> Who is America’s Dad now?!” #EddieOnSNL pic.twitter.com/vVf4LOrSvd

Cosby currently is serving a 10-year prison sentence after he was convicted two years ago of drugging and sexually assaulting former Temple University employee Andrea Constand at his Elkins Park home in 2004. He's been accused of similar sexual assaults by more than 60 other women.

On Monday, Cosby spokesman Andrew Wyatt issued a statement lashing out at Murphy for taking shots at Cosby. Wyatt said Murphy should have shown deference to Cosby for breaking "color barriers" in the entertainment industry.

A spokesman for Bill Cosby has fired back at Eddie Murphy after the comedian made jokes at Cosby's expense during his opening monologue on Saturday Night Live, @dakinandone reports.

"It is sad that Mr. Murphy would take this glorious moment of returning to 'SNL' and make disparaging remarks against Mr. Cosby," Wyatt said. "One would think that Mr. Murphy was given his freedom to leave the plantation, so that he could make his own decisions; but he decided to sell himself back to being a Hollywood slave."

Murphy's representatives did not immediately respond to the remarks from Wyatt on Monday morning.

Tension between Cosby and Murphy stretches back to the 1980's, when a new generation of comics took an explicit turn away from Cosby's cleaner brand of humor. Murphy covered their relationship in his 1987 stand-up special "Raw," where he recounted an admonishing phone call from Cosby.

Ironically, one of the reasons Murphy distanced himself from "SNL" was a joke he found distasteful from former cast member David Spade, who referred to him as a "falling star" in a "Hollywood Minute" skit. The two were cold toward each other for years until they patched things up in 2011.

Wyatt's statement went on to say that he hoped Murphy and Cosby could have a "meeting of the minds" at some point in the future.

With Cosby behind bars and facing steep legal fees, it would be hard to imagine Murphy accepting the invitation or feeling much remorse for the jokes at Cosby's expense.