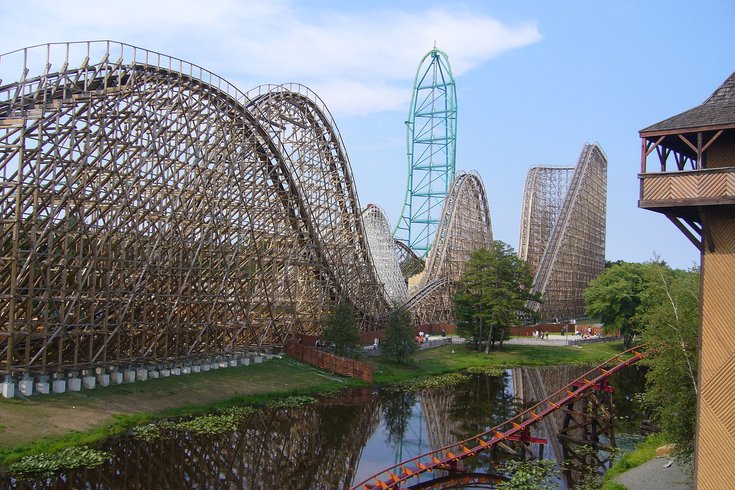 The popular El Toro roller coaster at New Jersey's Six Flags Great Adventure has been temporarily shut down by the state Department of Community Affairs due to a partial derailment that occurred at the amusement park Tuesday afternoon.

A park visitor posted a video on YouTube showing the train car stalled on the 19-story-high coaster.

"You can see just wheel above track," the woman says in the video, zooming in on the train car. Park guests were still aboard the ride at the time the video was taken.

"The rear up-stop wheel, which prevents the train from lifting, came up on top of the rail," Ryan said. "Inspectors in DCA's Carnival-Amusement Ride Safety Unit have not yet determined what caused the derailment."

There were no injuries in the incident.

The department has "red-tagged" the ride, prohibiting it from operating and placing it under engineering review. The ride will not reopen until the manufacture provides a report explaining what caused the incident and what needs to be done to fix it. Switzerland-based Intamin Amusement Rides is the designer and manufacturer of El Toro.

"The safety of our guests and team members is always our highest priority," Six Flags Great Adventure spokesperson Kristin Fitzgerald said. "After the ride stopped before completing its cycle, all riders were returned to the station and safely exited. The ride will remain closed for a full inspection."

Fitzgerald said the train’s safety systems worked as designed and the train remained on the track.

Those who were aboard the ride were issued front-of-the-line passes to compensate for their time.

El Toro opened in 2006 and was voted the best wooden coaster in the world by the 2011 Internet Coaster Poll. It received the same distinction again in 2017 at Amusement Today's Golden Ticket Awards. With multiple hills, the ride reaches 70 mph and has a first drop of 176 feet.

The incident came two weeks after two guests at Six Flags were hospitalized after the park's Saw Mill Log Flume ride malfunctioned and partially tipped the guests on their boat. That ride also remains temporarily closed.