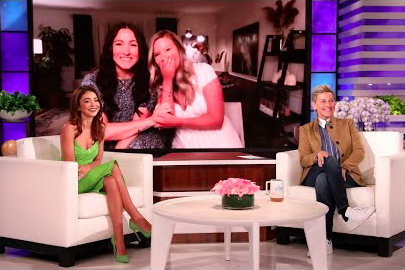 Ellen Degeneres brought two Philadelphia area women onto her show to share their story about how a kidney donation transformed them from strangers into best friends. The women received $20,000 to support their organization, Team BeMore, which raises awareness about living organ donation.

Breanna Sipple and Erin Francis were strangers in the Philadelphia area three years ago when a single Facebook post changed both of their lives.

Francis was 24 years old and had just gotten married when she went into kidney failure. She was uneasy about sharing her story and seeking help, but her husband acted as a champion and made a Facebook post in search of an organ donor for Francis.

Sipple, who lives in Warrington, Bucks County, happened to see the Facebook post and felt moved to take action. She found out that she had the same blood type as Francis and reached out to become a living donor. After undergoing a rigorous panel of medical tests, the donation was successfully completed.

On Wednesday afternoon, Sipple and Francis appeared on "The Ellen Show" to discuss their journey, their friendship, their mission, and the power of organ donation.

"I didn't even know what living donation was at the time, but (after) reading the story, I read more, and I can't even explain the feeling that came over my heart," Sipple said, explaining her desire to be a donor for Francis.

"I ended up seeing a video log that (Sipple) made of her journey going through getting tested, and when I saw it, I just bawled my eyes out for hours," Francis said. "I couldn't believe that a stranger wanted to do this for me. I mean, it's one thing if a family wants to get tested for you, but someone who doesn't know anything about you and feels compelled to save your life is just — she's a miracle."

More than 650,000 Americans are facing end-stage renal disease and nearly 115,000 people are on a waiting list for a kidney transplant, with an average wait time of three to five years. The COVID-19 pandemic has seen a rise in chronic kidney disease that will likely make the situation more dire in the years ahead.

More than 468,000 Americans are on dialysis, many of them waiting for a new kidney.

The story shared by Sipple and Francis, who are both healthy today, offers hope for many who must look beyond their families in search of living donors.

In an interview with 6ABC earlier this year, Sipple said the experience of becoming a living donor helped her become the person she is today.

"I really, truly feel like my life didn't start until the day I decided to become an organ donor," Sipple said.

During their appearance on "Ellen," DeGeneres brought out actress Sarah Hyland, who underwent two kidney transplants during her 20s. Together, they presented Sipple and Francis with $20,000 to support the growth of Team BeMore, courtesy of ShutterFly.

THIS JUST IN! I can’t believe we are announcing that your Be More girls are going to BE. ON. ELLEN. Words cannot express how much this means to us and how important this is for the transplant community! We are so so so grateful and can’t wait for you to watch 😭TUNE IN WEDNESDAY 10/21 at 3pm EST 🤍🦋 #BEMORE