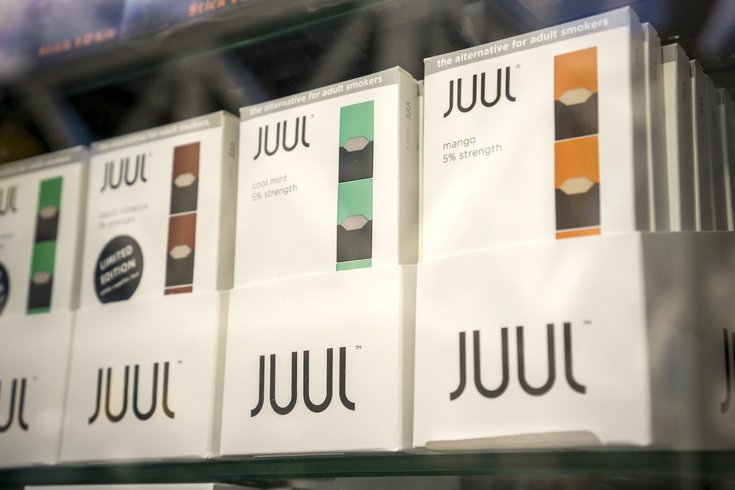 Philadelphia is suing JUUL for its role in increasing the popularity of e-cigarettes among the city's youth.

Philadelphia is suing JUUL Labs Inc., claiming the e-cigarette manufacturer is partly responsible for a youth vaping epidemic in the city.

The lawsuit, filed in California's state court system, seeks injunctive relief and abatement remedies to combat the popularity of e-cigarettes. It also seeks compensatory damages to recover financial losses incurred by the epidemic.

"In recent years, the city has seen dramatic increases in vaping among students after years of seeing youth smoking rates plummet," Pratt said in a statement. "This dramatic turnaround is largely because of JUUL's e-cigarette products and vaping."

The percentage of Philadelphia high school students who smoke cigarettes has dropped from 23% in 1999 to 2% last year, according to the city's health department. That's lower than the national rate of 6%.

"JUUL developed and marketed a product to deliberately get young people addicted to nicotine," Health Commissioner Dr. Thomas Farley said. "The next generation is too important to Philadelphia for us to allow them to do that."

JUUL officials did not immediately respond to a request for comment.

JUUL has controlled more than 70% of the e-cigarette market since 2015, according to the city. Philly officials also cited reports that showed that the number of youth who used e-cigarettes increased by 1.5 million nationally between 2017 and 2018.

"This corporation reaps untold profits by pushing an addictive product through its relentless and exploitative marketing, a shameful practice that this litigation aims to halt," Mayor Jim Kenney said. "JUUL needs to be held accountable."

Still, the number of high school and middle school students who use e-cigarettes dropped from 5.4 million in 2019 to 3.6 million earlier this year, according to an annual survey conducted by the Centers for Disease Control and Prevention.

The decline followed an alarming number of vaping-related deaths and illnesses reported last year. As of late February, 2,807 people had been hospitalized and 68 people had died. Most of those cases involved people who vaped THC, the psychoactive compound found in marijuana.

Earlier this year, the Trump administration began enforcing a ban on flavored and mint e-cigarette cartridges used in JUUL and other e-cigarette products. Flavored e-cigarette liquids used in open tank systems were not affected.

Since the strategies have been implemented, Philadelphia's number of tobacco retailers per capita has decreased by 20%.