Applications are now available for leases starting in June 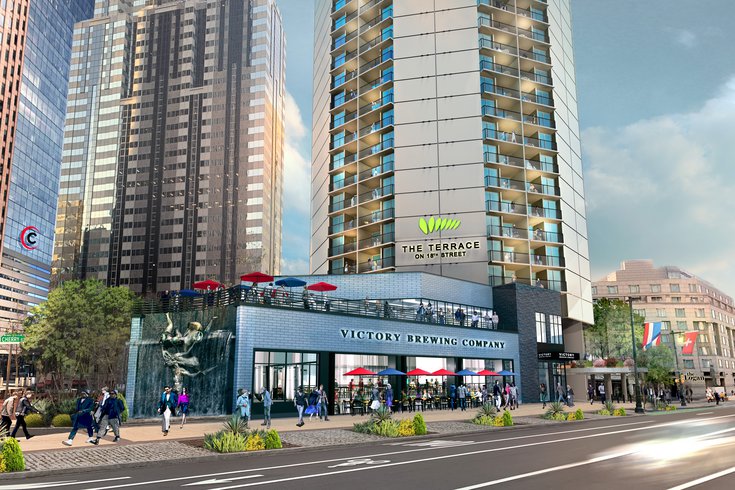 The Embassy Suites located on the Benjamin Franklin Parkway in Philadelphia will be converted into a new apartment building featuring a Victory Brewery Co. taproom.

The former Embassy Suites hotel on the Benjamin Franklin Parkway will reopen in June as an apartment tower dubbed The Terrace on 18th.

Pearl Properties closed the Center City hotel in July due to the impact of the coronavirus pandemic. It is converting the building's 288 hotel suites into one-bedroom apartments, the Philadelphia Business Journal reported. The project will cost about $20 million.

Pearl Properties purchased the building for around $60 million in 2018 with the intention to continue operating it as a hotel. But when COVID-19 put an end to most travel last year, the Philadelphia-based real estate company decided to close its doors on July 4.

The Terrace on 18th is accepting lease applications for rentals that begin June 1. Apartments will vary in size from about 680 to 715 square feet. Rental costs will start at $1,895, according to the Inquirer.

"The Terrace has an iconic Philadelphia location…and shape!," a description on Pearl Properties' website reads. "Due to its round structure, each apartment has a spacious private balcony with sweeping views of Center City and the world beyond. Located just a few blocks to the towering Comcast headquarters and an easy walk to Philadelphia’s business district and premier shopping and dining destinations, The Terrace offers urban convenience mixed with parks and green spaces."

Pearl Properties has undertaken similar projects in the past. In 2015, it converted the former Latham Hotel in Rittenhouse into 144 units. The company also developed The Granary, a 229-unit apartment building located just off the Benjamin Franklin Parkway.

The conversion project will revert the building to its original use. The building opened as the Plaza Apartments in 1973, according to the Pearl Properties' website.

The Terrace on 18th eventually will house two restaurants, including a Victory Brewing Co. taproom. The Chester County-based company announced plans to take over the space previously occupied by TGI Friday's in October 2019. It will be the brewing company's first Philadelphia location.

Before its 2020 closure, the Embassy Suites was the second hotel owned by Pearl Properties. The company also owns the Cambria Hotel in Center City, which opened at 219 S. Broad St.