Embiid, Saric named to NBA All-Rookie First Team – but will either Sixer win Rookie of the Year? 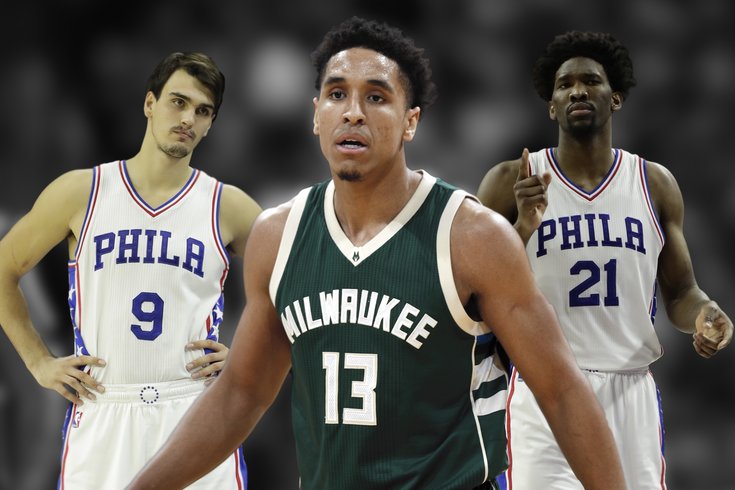 For the first time in franchise history, a pair of Sixers players – center Joel Embiid and forward Dario Saric have been named to the NBA All-Rookie First Team in the same season.

Saric, along with Bucks rookie Malcolm Brogdon, was a unanimous selection, receiving a first-team vote from all 100 voters. Embiid, despite playing in just 31 games this season, finished in third with 82 first-team votes and seven second-team votes.

Here's a look at how the full voting played out:

SO WHO IS THE ROOKIE OF THE YEAR?

All-Rookie Team isn't the only honor being handed out on Monday.

During the 2017 NBA Awards Show, either Saric or Embiid could hear his name announced again, this time as 2016-17 NBA Rookie of the Year.

As recently as March, Saric was the Vegas favorite to take home the extra piece of hardware, but as it gets closer, a fellow unanimous All-Rookie First Team selection has surpassed the Sixers forward, according to oddsmakers.

But what do their stats say – and, of course, keep in mind that Embiid only appeared in 31 games and was on a minutes restriction all season – about which player is most deserving?

Here's an even more in-depth (and color-coded) breakdown of their stats:

Now that the regular season is complete, here is where the NBA Rookie of the Year race stands for the top three candidates. pic.twitter.com/1D9FZsDro7

But, as I wrote back in April, the voting format for Rookie of the Year could actually be the biggest obstacle for Saric or Embiid to overcome:

Here's how it works: A panel of 130 sportswriters and broadcasters will submit a ballot with three players – first place (worth 5 points), second place (3 points) and third place (1 point) – who they think should be ROY. The winner is based on total number of points, so there's a chance that the player with the most first-place votes doesn't actually wind up winning. (Last year's winner, Karl-Anthony Towns, received all 130 first-place votes.)

In fact, both Embiid and Saric could receive more first-place (and third-place) votes than Brogdon and still lose.

Here's just one example of how that could happen:

And that's assuming no other players receive votes, which almost certainly won't be the case.

There will also be some writers who leave Embiid completely off the ballot because he only played in 31 games this season – and even more who will refuse to list him first on their ballots for that very same reason. That fact alone, based on the total points system, is going to make it very difficult for the rookie center to win the award at all.

Furthermore, Embiid and Saric could split the vote among Sixers sympathizers and those who don't think a team's record is entirely indicative of a rookie's contribution. In other words, those who do actually vote for Embiid could be taking valuable points away from his teammate. [PhillyVoice, 4/13/17]

And that's part of the reason why our own Rich Hofmann believes Embiid won't win Rookie of the Year, despite the fact that he's "one of the best rookies in NBA history" – not to mention one of the most entertaining.

My gut feeling is that Embiid won’t win, and it will be interesting to see how the votes shake out. In the latest NBA.com rookie ladder, Scott Howard-Cooper writes, “He is the guy who could get first-place votes and also be left out off the ballot by others.”

I wouldn’t fault someone for voting Embiid, simply because his 786 minutes could have been more impactful than Saric and Malcolm Brogdon’s 2000. Again, rookies aren’t good!

So if Embiid is out of the running – and the vote totals for the All-Rookie team would suggest that ROY is actually a two-man race between Saric and Brogdon – who has the edge between the two guys left standing? Here's more from Rich:

It’s a tricky choice because I’m not certain either player would be as effective if they traded roles. Brogdon’s efficiency would likely plummet as the top scoring option in Philly, while Saric’s shaky jumper might mess with the Bucks’ spacing.

Considering Brogdon is a year and a half older than Saric and playing more in an off-ball role, I think Dario will have the better career as he refines his three-point shot. But if we’re really rewarding the best rookie season, Brogdon definitely has a case if Embiid is out of the running.  [PhillyVoice, 4/10/17]

We'll find out on Monday night, but if you're wondering what media members were saying immediately following the conclusion of the regular season, we've got you covered.

*based on total first place votes in above table

Turns out it was a two-man race, just not between the two men we were expecting...