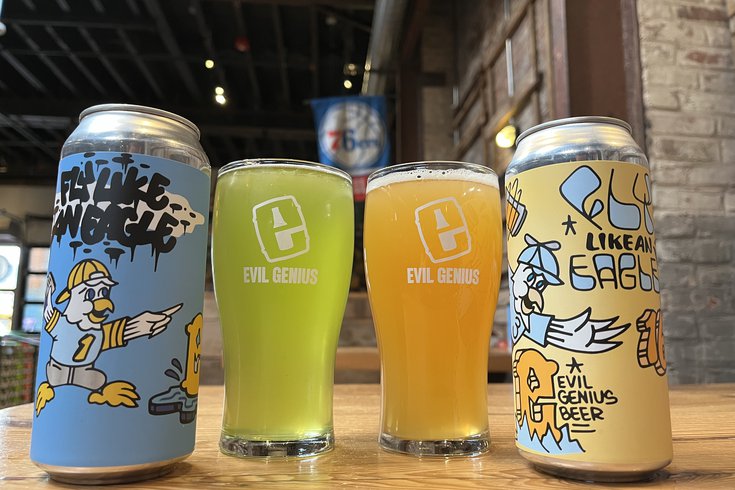 Evil Genius Beer Co., the Fishtown-based brewery that recently expanded to seven states along the East Coast, is gearing up for the Eagles' playoff run by bringing back a limited-release beer available for purchase all weekend long.

For fans looking for a Philly-centric way to get pumped before the Eagles face the New York Giants in the Divisional round on Saturday, Evil Genius is bringing back its Birds-themed Fly Like An Eagle IPA for as long as the team is in the playoffs. The water ice-inspired beer hasn't been released since the end of the Eagles' 2017 Super Bowl season, but back then, it had a cherry flavor.

This time, the brewery's concoction comes in two varieties, mango and blue raspberry. The IPA is brewed with vanilla and lactose along with more than 100 pounds of fresh mango puree and more than 15 gallons of blue raspberry slushy syrup, respectively. The delicate ale is 6.2% ABV and is available in four packs for $18 at Evil Genius' flagship location. As a bonus, the blue raspberry ale is bright green.

"Sports has become such a huge part of our business," said Trevor Hayward, co-founder of Evil Genius. "Our taproom hosts regular viewing parties for local teams and some of our most popular beers have been derived from the realm of athletics like 'There's No Crying in Baseball' and 'Trust the Process.'"

For the grand finale of football season, Evil Genius is releasing another IPA for fans to enjoy through this weekend's games. Playoffs?! takes its name from former Indianapolis Colts coach Jim Mora's infamous postgame rant in 2001, an iconic diatribe that has remained relevant for more than 20 years.

The full-bodied IPA is described by Hayward as a "creamsicle without the brain freeze," and features all-natural orange and vanilla flavors as well as Azaaca and Motueka hops at 7% ABV.

The beer can be found at grocery stores and shops like Giant, Total Wine, Wegman's and Weis Markets. Playoffs?! is available in draft packages for bars and in six packs for consumers, with the average price around $11.99.

Those looking for other ways to celebrate can head over to the Comcast Building in Center City on Wednesday or the Acme at 19th Street and Oregon Avenue on Friday for a chance to try out Dietz and Watson's free "Bird Dogs" in green buns. Keep up with the official Eagles partner on Instagram to find more information about the playoff promotion.