Evil Genius beers to be available in Midwest U.S. soon 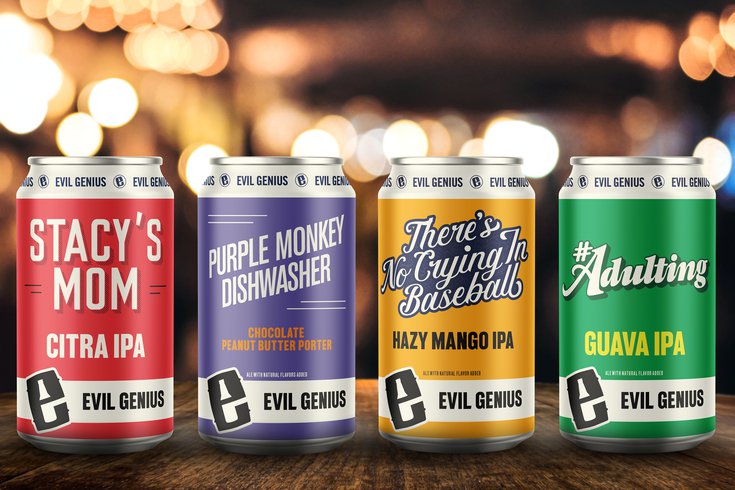 Evil Genius Beer Co. is set to expand distribution of their canned craft beers in parts of Ohio and Michigan this summer. The brewery has plans to expand nationwide.

Evil Genius Beer Co. is set to expand distribution into the Midwest this spring. Beginning this week, Evil Genius will ship some of their most popular canned beers to grocery stores and other major retailers in Ann Arbor and Detroit in Michigan, and Columbus and Cleveland in Ohio.

Currently, the Fishtown craft brewery's beer can be found seven states: Pennsylvania, New Jersey, Delaware, Rhode Island, Maryland, Massachusetts, and Connecticut. The brewery, known for the silly, often pop culture-inspired names for it beers, is planning for a nationwide expansion.

Co-founders Luke Bowen and Trevor Hayward say that they're excited to introduce Evil Genius in drinking cities throughout the Midwest, and said that some of these cities already have customers waiting to try their beer.

"Our goal is to provide an entirely new category of beer to the masses," Bowen said. "Beer that not only delivers a great taste but also evokes positive, nostalgic memories that make you feel good. We've been amazed at the response we've had over the last 10 years and can't wait to introduce Evil Genius to new drinkers across the country."

The brewery's westward expansion begins this week in cities and suburbs in Ohio, and will be available in Michigan shortly after Memorial Day weekend. The craft beer will be available in independent shops, as well as major retailers and grocers including Acme Fresh Market, Buehler's Fresh Foods, Giant-Eagle, and Discount Drug Mart.

Following the initial expansion into Ohio and Michigan, the company plans to further its reach across the Midwest.

The company plans to move into additional markets before the end of 2022. Evil Genius wants to focus its future expansions in large supermarkets like Walmart and Wegman's, in addition to independent beer shops.

Along with their expansion in distribution is a similar expansion in production, Bowen told Philadelphia Business Journal. The company anticipates 20% to 25% growth over the next year. This year, Evil Genius is targeting 20,000 barrels, a jump from just 16,000 before the pandemic.

Though the craft brewery will continue to eye expanding its territory, many of the investments its co-founders make will go to support its tasting room at 1727 N. Front St., which opened in 2017 and is known as the The Lab. Evil Genius was founded in 2011 by Bowen and Hayward, who met while students at Villanova.