For Eagles playoff run, Dietz & Watson truck will give out free 'Bird Dogs' in green buns 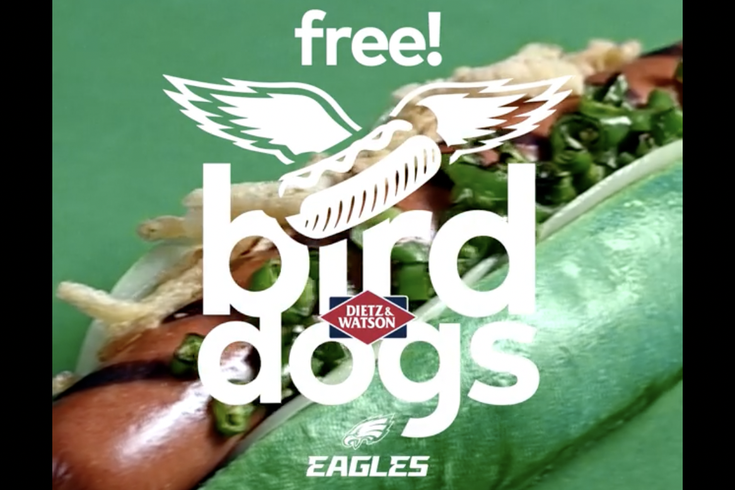 Dietz & Watson is giving out free 'Bird Dogs' from a truck that will make stops at various locations in Philadelphia during the Eagles' playoff run.

Nothing unites Philadelphia quite like an Eagles playoff run, especially when the team owns the top seed in the NFC and Super Bowl aspirations are palpable in the air. Add some free food to the equation and you'll have plenty of hungry dogs running faster over the coming weeks.

Deli meat provider Dietz & Watson, an official partner of the Eagles, announced Tuesday that it will be giving out free "Bird Dogs" from a mobile food truck in Philly for the duration of the team's playoff run. The beef franks will be served on green, food dye-colored buns from Cacia's Bakery in South Philly. They'll be topped with diced long hots, provolone and crunchy onions, with a spicy cheddar option for fans who want something with a bit more kick.

The green food truck also will be giving out free gear to fans who make a visit. YouTube foodie and influencer JL Jupiter shared an Instagram story on Tuesday showing a green, Happy Meal-style box that contained a pair of Bird Dogs along with the beanie and T-shirt seen in the video shared by Dietz & Watson, to give an idea of what fans might expect from a trip to the truck.

The truck's first appearances in the city are planned Jan. 13 at a location to be determined in University City; Jan. 18 at the Comcast Building in Center City; and Jan. 20 at the Acme at 19th Street and Oregon Avenue in South Philly. Dietz & Watson will provide specific details on Instagram and on the company's Bird Dogs website.

The Eagles, who have a first-round bye in the playoffs, will host their Divisional round opponent either Saturday, Jan. 21 or Sunday, Jan. 22.

The promotion — apart from being awesome — brings to mind the reality that Philly isn't that big of a hot dog town. The city has its usual go-tos like cheesesteaks and roast pork sandwiches, but even the Eagles tailgate scene often skews toward Italian sausages and chicken wings over hot dogs.

Compared to cities like New York and Chicago, Philly isn't home to a plethora of hot dog spots that offer all kinds of variations and toppings. The best-known hot dog spot in Philly is Johnny's Hots along Delaware Avenue. Even when cult favorite spots emerge in Center City, like the former Underdogs on 17th street, they have often struggled to survive. Hot dog chains that have attempted to enter Center City in recent years, like the Atlanta-based Original Hot Dog Factory, haven't fared well, either.

Memphis Taproom, which long had a popular hot dog cart inside the restaurant in Olde Richmond, announced last week that it's closing at the end of January.

Maybe Dietz & Watson should just make the Bird Dogs truck a permanent thing in Philly. Admittedly, it can be a bit disconcerting when food coloring comes into the picture, especially green on these Bird Dog buns (or bagels on St. Patrick's Day) when green is usually associated with mold on bread. But hey, Go Birds and stay tuned to Dietz & Watson's social media for updates on the location of the Bird Dog truck. Best case scenario? Philly will be getting free hot dogs for the next month.