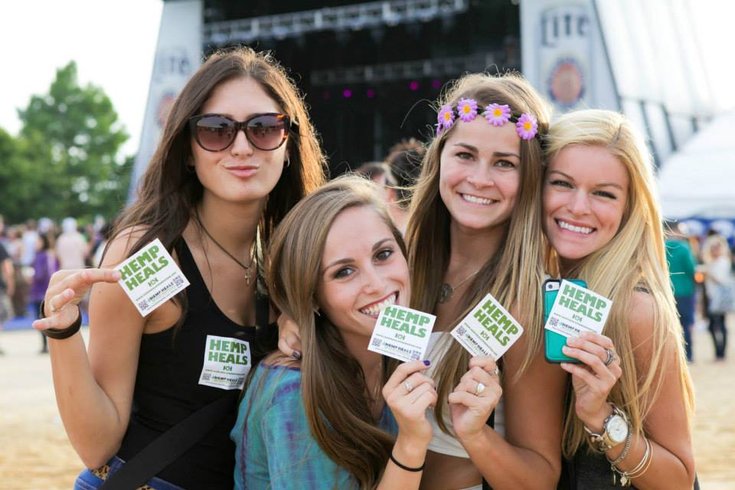 A group of concertgoers pause for a picture at the 2015 Hemp Heals Music Festival.

On Friday, former Flyers enforcer Riley Cote – now an assistant coach with the Lehigh Valley Phantoms – will be returning to Philly along with some more musically-inclined friends for the Hemp Heals Music Festival on Penn's Landing.

Now in its fifth year, the show is put on by Cote's Hemp Heals Foundation, which he started after a post-retirement "awakening" and has continued to develop throughout his coaching career. Headlining the event this year will be 311 and Matisyahu, but that's just part of what will be taking place at Festival Pier.

"It’s got music, and I think that’s a great way to tie in the message," Cote said in a sit-down interview with PhillyVoice last month. "The demographics seem to be younger, so you’re kind of shaping minds the right way so you don’t need to reprogram them. You’re giving them the truth and guiding them the right way from the start."

In addition to the concert, there will be vendors who specialize in hemp-based products like clothing, paper and skin and hair products. And not only will these vendors be selling the items, but they'll also be there to tell you more about the importance of hemp and its many benefits.

"If you walk around to all the tents and the vendors, you’ll see a lot of the different faces of cannabis and hemp," Cote said. "You’ll see hemp clothing, skin and hair products, hemp paper, you’ll see a guy from Lancaster who sells a hemp pretzel. He calls them Hempzels. So it’s also inspiring young, entrepreneurial minds and giving them a tool and a resource to use in a different, innovative and eco-friendly way. ... The sky’s the limit. I think there are over 30,000 different things you can do with hemp, from obvious things like accessories and socks to building materials, biodiesel, filters, the list goes own."

And the purpose of this festival is just that: to spread awareness and educate people about something that has been largely marginalized and carries an unearned stigma due to the fact that it comes from the cannabis plant.

"This time last year, we did a HempCrete workshop," Cote said, citing an example of his foundation's mission in action. "So we brought in a builder from Colorado who builds with HempCrete. And that’s hemp hurd mixed with lime and water. And we had about 17 local builders and contractors that were interested in working with the product come out for a full day to learn. Everyone left with a hemp brick and a better understanding of the viability and usefulness of the plant. So, again, it’s about education."

But although hemp is completely legal and lower in THC than medical cannabis, it still carries some of the same healing properties, namely in the form of CBD (Cannabidiol).

And to Cote, that's the next step for his foundation.

"We’d like to get into the research side some day," he said. "So once we get some grants, that’s the next step. Maybe some CBD stuff. Maybe, possibly with professional athletes or former athletes with the stuff we talked about before, like concussions and CTE."

It doesn't just heal the body and mind, according to Cote. It can also be used on a global scale to help heal the planet.

"It’s a much bigger picture than just healing the physical body," the former Flyer said. "Hemp is grown in Chernobyl as a mop crop to pull the radiation out of the soil. And that can be grown everywhere. So it’s a healing plant in that sense, as well. It pulls contaminants out of the ground and literally heals the earth and rejuvenates the soil. It even helps lower carbon emissions and delivers the same kind of cleaning properties to our air."

And if all this seems a bit overwhelming, then the Hemp Heals Festival might just be the perfect place to spend Friday night, especially if you're a music fan.

"It’s about introducing everyone to cannabis and showing them that cannabis, as a whole, whether it’s the clothes, the skin and body care, the food, the CBD — can help increase your quality of life," Cote added. "And on a bigger scale, it can help the environment and the economy. You know, give the farmers a plant they can grow, and a clean one — no GMOs, no pesticides, no insecticides. We don’t want that; we want a clean crop. Replace the corn, canola and soy products with hemp.

"And that’s the whole vision. It’s bigger than just hemp heals the body. It heals everything."