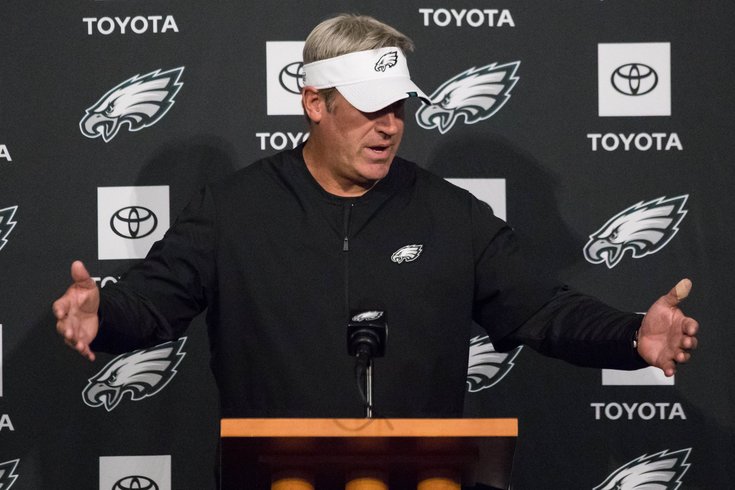 I love you, Doug.

Without a speck of hyperbole, Doug Pederson is the best thing that ever happened to the Philadelphia Eagles.

He is an immortal being amongst men and women who have come across our city to perform or manage at a high level. He’s arguably the most important sports figure in the history of our city. “Douggie P” brought us all a Super Bowl but did it by keeping together one of the most unlikely teams due to injury and circumstance.

It’s just impossible for any elder member of your family, right down to the child you’ve raised, to base their entire existence as an Eagles fan on whether their team wins the Super Bowl each season – and then turn around and downplay Pederson.

I was raised then lived the reality of what a Super Bowl meant and now means to Philadelphia. It’s also a smack in the face to Pederson to downplay his role in keeping a team of underdogs together and balanced.

Possibly his greatest accomplishment was never wavering and being honest to a fault. Those are two things we beg for from any of the sports figures – especially those in leadership positions. He spoke truth whether it was the right thing to do or not and stood up to everyone who tried to belittle him – from Angelo Cataldi to Jeff Lurie.

This is the same man who struggled with his rental car, couldn’t get right his headset during a preseason game, and struggled to get through initial press conferences. He was an easy target for any column, tweet, or radio sound board. But he never backed down, he never gave up, and he never had to turn himself into Chip Kelly to assume control – instead he just left.

This is what Pederson took to the locker room, or probably what he took out of the locker room into the real world. His seamless transition from coach to press conference manager/interviewee brought about trouble – he told us his staff would be back before they were fired as an example. But it was the level of trust that he exhibited there, getting his guys’ backs, that was copied and pasted with players.

Doug Pederson never truly lost the locker room, only the front office. That was the true shame in how he left, but he left the way he coached and lived here in Philadelphia — tanking an exit interview to get out of weekly meetings meant for Michael Scott. He spoke truth to power; more importantly he spoke the truth.

His on-field accomplishments are incredible. Not just taking a team to beat the Patriots in the Super Bowl but making the playoffs the following season. He battled through Carson Wentz and the injuries to the constant chatter of Nick Foles being better. But once again, it wasn’t how he handled a radio or column interview, rather what he did to get there.

This is the crux of why Pederson stands out so much as an icon in this city’s long and illustrious sports history – he was exactly who he coached. He was Nick Foles. He was every offensive lineman with a dog mask. He was Jay Ajayi. He was Alshon Jeffery. They were all fighting for something — for recognition, money, legacy, or simply showing they belong.

It may not have felt like it at the time but connecting to these players on an individual level was probably one of the easiest things Pederson did in his career. Because it’s easy for him in general. It’s who he is.

He saved us from Chip Kelly, and Jeff Lurie from himself. He handled any alleged feud inside the building with Jim Schwartz as effortlessly as he did a Cataldi quip.

Unlike Buddy Ryan who everyone in the city loved, he didn’t turn his back on the defense. Pederson allowed Schwartz to run that side of the ball, but those players weren’t forgotten by the head coach. Everyone bought in and it mattered most in the playoffs.

Unlike Andy Reid, there wasn’t any filter. Pederson never seemed guarded, rather agitated that he couldn’t give us the full response. It felt like Pederson was angry at his boss for limiting responses, not Jimmy Kempski for asking the question. Reid is one hell of a coach, heading to Canton, but he was out of tune with a lot of this city. While it became a running bit on WIP – I was there for some of it and had fun with it too – the whole “better job of putting guys in the right position” thing wore thin. Pederson never insulted us like Reid and Kelly did. (Ok, that was unfair to Reid. Andy Reid is a filet mignon compared to a half-microwaved hot dog that is Chip Kelly.)

I’ve never felt this way about a coach, the same love and admiration I have for players. It’s an awesome feeling. So is rooting for Jacksonville this year. It’s been one of the coolest things to see our guy go down and prove everyone wrong – so far. He refused to play under Lurie’s rules despite earning every chance to be free. He at least earned the right to choose his staff.

Instead, Pederson took the year off and decided to return and rebuild one of the league’s forgotten franchises. It’s a beautiful sight watching him work his magic.

I love Doug Pederson and am truly happy watching him succeed.

Now, go out there Nick Sirianni and kick his ass!

Two angles work towards the Jags this week and I’m willing to spend up and buy the full point. By moving this from 6.5 to 7.5, we’ve now covered two key numbers in 6 and 7. The obvious angle is revenge; of course, not in the true sense because everyone loves him, but Pederson is certainly looking to stick it to someone up top. The second angle is familiarity, which should go a long way in the NFL.

Pederson was there when they drafted Jalen Hurts. Passing game coordinator Jim Bob Cooter was on the Eagles staff last year and knows the team well. DC Mike Caldwell came over from Tampa Bay, who played the Eagles twice last year – holding the Birds to 22 and 15 points. Finally, they beefed up their d-line in Jacksonville with a top-notch hire in Brentson Buckner – he’s done wonders with defensive lines against the run.

Last thing, Jalen Hurts is just 2-4 SU and 3-3 ATS playing at home between a pair of road games. Eagles win but not by much.