Eytan Shander: It would be almost impossible for Howie Roseman to mess up this pick 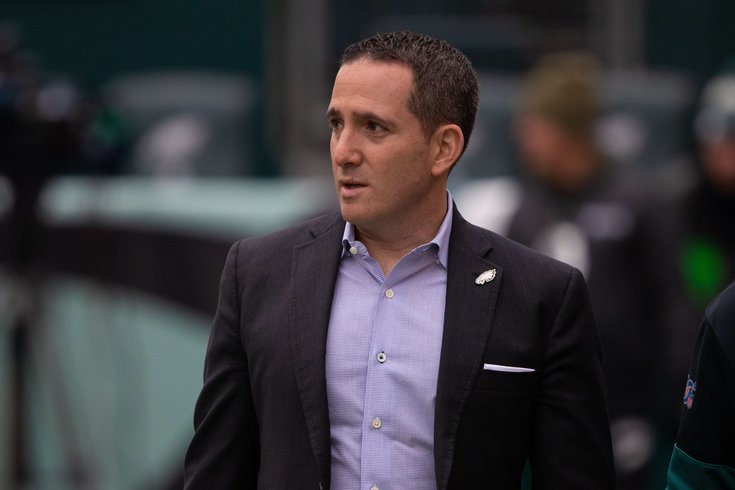 The Eagles certainly like their share of chaos. It almost seems as if they prefer it around the NovaCare center. As crazy as it may sound with all of that in the backdrop, I honestly think there are a couple of kids the Birds could draft and — brace yourselves — be as close to universally accepted as possible.

Now, I’m not telling you the pick will be universally accepted, but depending on the name, it might be well-received by most fans. Forget the radio. I don’t care what some host who needs to kill 4-5 hours thinks about this pick. I’m talking about you, the people who matter.

I think we can take some obvious names off the board. Be it ignorance of who a player is or the position he plays, some kids won’t get anywhere near the benefit of the doubt.

For example, at 12, Rashawn Slater will most likely be available. He’s the second best OL in the draft and would be a welcomed sight on this line. But he’s not a WR, he’s not a CB, he’s not the best OL. Whatever the reason, it will be held against this young man until he’s an All-Pro. Stupid, but unfortunately it's our reality.

Slater is actually in the minority this year, even if they take a defensive lineman, there will be less uproar then in prior drafts. They have a track record of taking guys on either side of the line in the first round, despite leaving talent at the skill positions on the board. That is the biggest factor working against the Eagles taking a D-lineman, but there’s a name who could make it work.

If for some reason the Birds took Kwity Paye it would help mitigate the negative reaction to not taking a WR or CB. I think he’s the only guy on either side of the line would who be positively received, at least more than negatively.

The easiest place to start would be the outside, not the trenches. There are two names for both CB and WR who would be loved in Philadelphia from day one. The wideouts even more so, factoring in how Jaylen Waddle could erase years of failure at that position as well as a future.

I can’t believe I even have to write this, but do you honestly believe the fanbase here would have a problem with Devonta Smith falling to 12? The fans would be up in arms wanting to fire Howie Roseman because he dared take Smith at 12? Even the slip of Smith to the middle of the first round wouldn’t be brought up in any negative light, rather furthering how lucky we all got here.

Universal acceptance. You would have to just hate life in order to harp on how Smith slipped as any determining factor to how you feel about the pick. Throw Waddle in that mix. He’s also a sure thing in this conversation. The reality is Smith won’t slip to 12, but Waddle will be there. Ja'marr Chase and Smith are gone, so take the third best WR.

The only negative here would be the criticism Roseman would get in trading back to take a position where he could have stayed at six and taken the better receiver. I get it. But that’s more about the “idiot” making the picks, and not about how bad of a selection Waddle would be. The kid will still be able to step in and perform on day one.

Don’t worry, we have two more names to add, they just happen to be on the other side of the ball. Like Smith, Patrick Surtain will most likely not be available when the Eagles pick. If Surtain happens to fall, you keep your head down, take the kid, and get the hell out of the building. Like Smith, there won’t be a dry eye in the house reacting to the Eagles lucking themselves into the best CB in the draft.

Much like the previous scenario with the wideouts, the corners would play out similarly in Philly. Jaycee Horn is far from any consolation prize and would be a huge addition to the team right away. Taking the 2nd best CB in the draft at the 12th overall slot shouldn’t be met with any disdain or negativity. Especially looking at the type of talent Horn is.

Do we really need to go over the Eagles trading back up for Kyle Pitts, Chase, or Surtain? The reality is any real criticisms of those trade and draft scenarios would be the guy pulling the trigger. Asking why Roseman felt the need to move out only to move back in, but not asking why they drafted Pitts to help out Hurts.

I hate to be the bearer of bad news, but the likelihood of the Eagles taking a player that’s going to upset the majority – or anywhere close to that number – is fairly small. Let Roseman trade back, or take Azeez Ojulari, or trade up to take Mac Jones before we shred the pick.

Hopefully you see the difference between remaining diligently critical of Roseman and his boss and accepting a good draft pick when we see one. It’s just not something we are used to seeing… in the first round.

The Eagles are going to draft a lineman, most likely, at least according to someone on The Middle. Good news is we have a guy on the show who played OL! Check out Barrett Brooks going full “Gordy” mode breaking down everything he sees.

Today on @TheMiddleShow_, the guys discuss their opinions on Offense vs. Defense as the first round potential draft picks! Don't miss it, whole show below! #NFLDraftTakes @shandershow @bbrooks72NBCS @harrymayesTU

Make sure to subscribe to the JAKIB Media YouTube page for over 40 hours of NFL Draft coverage featuring Derrick Gunn, The Middle with Eytan Shander, Harry Mayes, and Barrett Brooks, and BIRDS 365 with Jody McDonald and John McMullen.

You can also watch extensive coverage live on PhillyVoice.com and presented by IBEW LOCAL 98 Thursday:

In South Jersey, you can then listen to The Fix with Ryan Rothstein on AM1490.

And throughout the draft on JAKIB Media's YouTube channel, Derrick Gunn will go live with his "Draft Takes" after each and every Eagles pick, plus reaction from Eytan and Harry, the BIRDS 365 guys, and Big Daddy Graham with Philly's biggest fan, Johnny Doc.