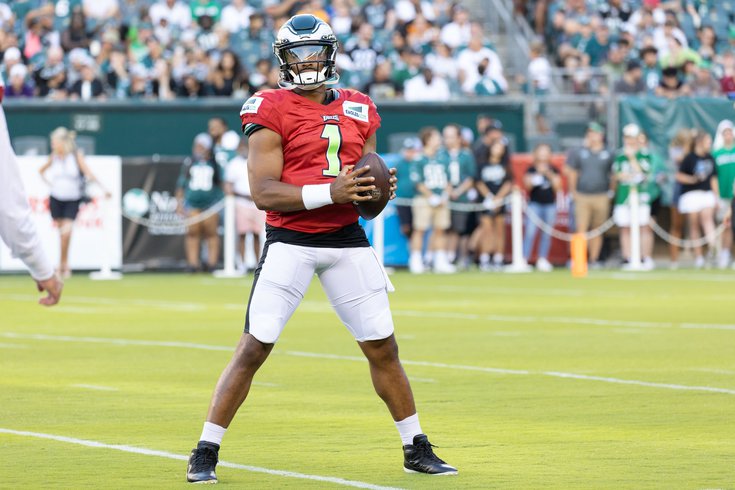 Jalen Hurts #1 of the Philadelphia Eagles looks on during an open practice at Lincoln Financial Field in Philadelphia, Pa. on Aug. 7, 2022.

We all expect the Eagles to be a good football team this year.

Granted, it’s Philadelphia so there are going to be patches of people and even outlets who seem to root for the opposite, but most sane people in this area believe the Eagles have a shot. How you define “shot” may differ from your neighbor, but the bottom line is they should be at least as good as they were last year. That’s the baseline for this season.

Jalen Hurts, Nick Sirianni, Howie Roseman, Fletcher Cox, and anyone else in this organization will fade or amplify based on how this season progresses. It used to be an old phrase like “the devil is in the details” but it’s become a polarized world just begging for some nuance.

The season has already been boiled down to what Hurts will do and if the team will keep him. Much has been discussed about some ridiculous ceiling he has to hit versus the most ridiculous floor he has to clear, but so much in this conversation is missing — back to that whole details thing.

Here are three pressing hypothetical questions that could define the Philadelphia Eagles season:

How “good” is good enough for Jalen Hurts?

What happens if the Eagles don’t make the playoffs but it’s not truly the fault of Hurts? Can he not show improvement, but the team be victim of circumstances outside of his control? The answer to both of these questions is absolutely, yes. The issue at hand is trying to determine where exactly the cut off is for Hurts and the Eagles to either move forward or part ways.

The obvious parameters are set – if the Eagles make the playoffs, then the kid is back and deservingly so. If they falter and take a significant step back with Hurts being the catalyst for that disappointment, then expect the Eagles to turn to a deeper draft. One can certainly argue the team was shopping this offseason for an improvement at the position – hard to argue that either Russell Wilson or Aaron Rodgers wouldn’t be an upgrade over anyone else – but that is exactly what you want any team to do, due diligence.

The problem is if Hurts struggles just enough to impact two or three games, but is the reason for winning seven or eight, and the Eagles miss the playoffs, then the team must make a serious decision. That’s ultimately how we advance this Hurts story before a game is even played. Looking at the more likely reality that Hurts doesn’t turn into Wilson or Josh Allen overnight, and his ceiling is probably closer to his current skill set than not.

But – that’s still good enough to win this division. It’s still good enough to contend against the mid and bottom tier of the league – beating those teams often. With the right combination of skill players and offensive lineman, a competent balanced attack (they were at their best pounding the hell out of the ball), and a bounce of the ball or two in their favor – who the hell knows how far they can go.

It’s also not going to be enough to justify nor allow the Eagles to move freely up the draft board. They still have picks to move, but the value for Hurts would dip simply being involved in trade discussions. Drafting Caleb Williams isn’t going to be easy for a team that’s destined to be in the 8–11-win range.

How good is good enough to keep Jalen Hurts? You are going to see it play out this year. They have a “shot” to win the division, to win 10 games, to make it to the conference championship. The deeper the run, the more predicated it is on the back of Hurts, but this team returns a lot of players in key spots.

Could the head coach or coordinator be fired this year?

Jonathan Gannon shot up the board of hot candidates for head coaching jobs this offseason, much to the surprise of most Eagles fans. The team was loaded with veteran talent on all three levels and had nowhere near the need to truly grow into anything, unlike the offense.

The team looked fine because they had good talent on the field who could make football plays against weaker lineman.

The talent wasn’t frustrating the coach, rather the other way around – mainly because of whatever system was implemented that called for zero to low pressure on good quarterbacks. It was mind numbing to see this talent fail to put any pressure on the opposing signal caller, especially the better they got in name.

We all watched QBs from Tom Brady to Justin Herbert march down the field at will and unscathed when it truly mattered. Gannon’s refusal or inability to put pressure on the QB will be his undoing this season if the Eagles need a scapegoat – something they’ve found plenty of times after prior seasons.

Gannon could easily be the fall guy for a team that kind of has to re-sign Hurts, even though the team missed the playoffs or took a noticeable step back. Gannon might be a victim of circumstances, masked by his failure to put pressure on the opposing QBs.

Is that truly the reason why Gannon would be fired? Probably not, but the optics of firing an offensive coordinator who doesn’t run the offense went out with Doug Pederson and the old regime. We are all wise to the game. It started with Andy Reid and has been some bizarre game of musical chairs ever since, and Gannon is going to find out that when the music stops it wont matter if he has a seat, because it’s not going to be Hurts who leaves the game.

Don’t be surprised if the Eagles and the offense is good enough to retain Hurts but not good enough to satisfy the masses – aka you – and they fire Gannon as a result.

What if they lose to Detroit?

The Eagles have had little practice this preseason and might not even play the starters this weekend against the Browns. With the arrival of A.J. Brown and the need for continuity with DeVonta Smith, Hurts hasn’t given a ton of chances outside of their limited joint practices. It’s not the reason why the Eagles could start out 0-1, but it might be a factor.

The Lions got their ass served to them by the Eagles last season, and since the NFL schedule dropped, they’ve been eyeing this one more than any other. Call it revenge or just Dan Campbell’s ridiculous platitudes, but Detroit has been told all offseason that they are still just the stinking Lions. But they covered spreads last year, and things drastically changed for the better after removing play calling duties from Anthony Lynn.

The Eagles have their home opener the following week in prime time against the Vikings. It’s an easy spot for any team to take their opponent lightly, especially because that opponent is the lowly Lions. It’s actually quite easy for me to see, but it wouldn’t have anywhere near the negative impact on the season that others would think.

But man, the reactions alone might be worth it.

This is a prove it year for their QB and the Eagles would open up 0-1 after losing to one of the worst projected teams in the league. Every single outlet from the TV to Radio to some loser running a Twitter spaces would be all over this loss like it’s the end of the world.

We never root for our own teams to lose, but a comforting side dish to that loss would be the worth the penny of any lost bet!