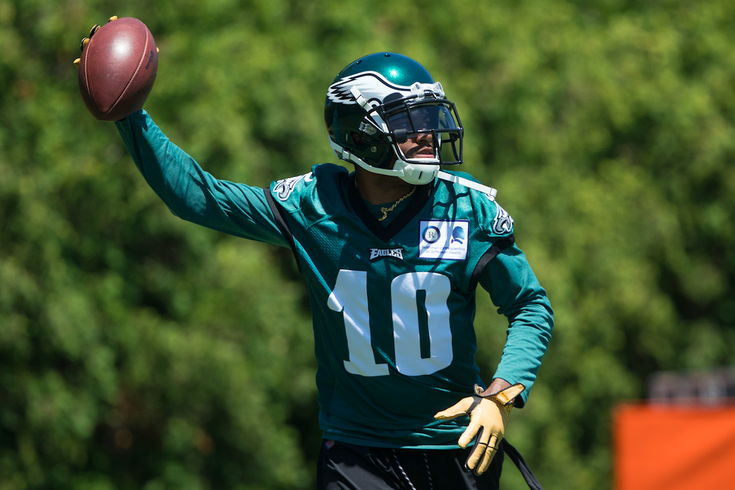 If you don't live under a rock, you've probably been seeing and reading a lot about FaceApp, the Russian-made photo service that uses artificial intelligence to make you look old — old enough to soon die and be under a rock!

This is a fad, of course, no different from the bottle cap challenge or the mannequin challenge, or whatever. The one difference, actually, is that here you giggle while handing over your face to a Russian company that would like you to know your data is just fine, completely safe, in their hands.

Some of these altered photos are chillingly realistic. Others are ghoulishly funny. As far as dumb obsessions that last two weeks go, this one is pretty top shelf.

Friends, the best FaceApp photo of all time belongs to a member of your Philadelphia Eagles. Meet geriatric DeSean Jackson, who took a senior moment to joke about his veteran status in the NFL.

OG Vet in the Game boss ‘

The expression, the beard, the gaze, the sinus crinkle — everything about this was perfectly executed. Maybe some other app can calculate his projected 40-time at 78 years old.

There have been some great FaceApp photos of athletes going around, including several from the Eagles. Carson Wentz gives us the terrifyingly accurate future Terry Bradshaw grin. Sidney Jones looks like the Vietnam vet who's in way better shape than his good-for-nothing nephew. Howie Roseman signed Fletcher Cox to a 45-year deal comprised of all guarantees and he's still out there wrecking fools.

We had a witty caption for these photos, but our memory isn’t what it used to be.#FlyEaglesFly pic.twitter.com/nT53oZ9MCc

Here are some other great sports world FaceApp photos to enjoy while it's still a thing.

Who else do you want to see? 👇 pic.twitter.com/acTayDpIXF

It’s 2045. After signing a second 13 year contract, Bryce Harper still hasn’t repeated the MVP season he had with the @Nationals in 2015. #faceapp #faceappchallenge pic.twitter.com/cKVT6Dt9r8

The only #FaceApp that matters is @SHAQ pic.twitter.com/IpB9Kp1kWL

And if you were in the dark about FaceApp before you read this, now you're not.

#FaceApp This too shall pass 😅 😑.. pic.twitter.com/VIN6F6pzIU