Fantasy football sleepers: These young quarterbacks could be steals late in your draft 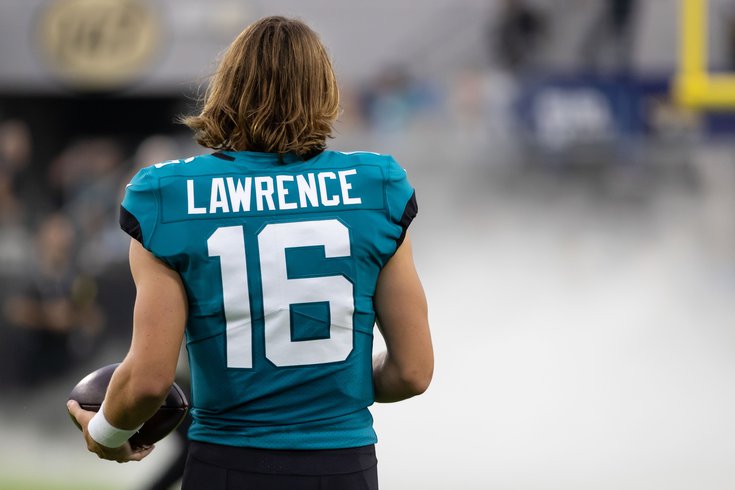 Trevor Lawrence could be a pretty solid fantasy performer this season.

Getting the right fantasy quarterback can be tricky.

You can either overpay for one of the bigger names, like Josh Allen, take a chance on one of the second or third tier guys in the middle, like Jalen Hurts, or sit back, load up on skill players and take a sleeper late in the draft.

The argument for sitting back is, aside from the QBs who are elite runners like Lamar Jackson, there is little drop off between production in the middle of the pack for quarterbacks. If you are going to wind up with someone like Kirk Cousins anyway, why not take a chance on one of the QBs we have below, who could surprise with their prowess this season.

Here is how we rank the 2022 QBs. And here is a look at five sleeper QB choices (with their Fantasy Pros ADP):

There will be growing pains with Lance. He will helm an offense known for running the ball, and he comes with a lack of experience, even heading into his second NFL season. However, with targets like Deebo Samuel, Brandon Aiyuk and George Kittle, Lance should have more than a few safety nets to dump the ball off to. And if his accuracy improves, he could really post decent numbers. Lance also can run the ball a bit — he took off 38 times in six games last season. If he is available when you get into the double digit rounds, he's got a very high ceiling for a QB in that range.

How is Carr QB15, after the Raiders traded for his old college roommate (and possibly the best wide receiver in the league) Devante Adams? Last year, he had 4,804 yards, 23 touchdowns and 14 interceptions and lifted Hunter Renfrow into fantasy relevance. But he finished with a whimper, with six games in a row below his projected fantasy scoring total and was the 14th best quarterback by total points scored. Adams could be the ticket to turn him into a top 10 producer, and getting him late in your draft could prove to be a steal.

Fields is a similar player to Lance, except he doesn't have the same kind of elite weapons (he'll be throwing to Darnell Mooney and guys you never heard of). However, he does run the ball a little more frequently, or at least did over his 12 appearances on the field in 2021 — totaling 72 rushes for 5.8 yards per in that span. He's another quarterback who will need to improve his accuracy, and may be a good draft selection to keep alongside a more reliable, boring Matt Ryan type with hopes that Fields will round into form as the season goes along.

Doug Pederson could be the perfect coach for Lawrence, who is the third sophomore QB we're including among our sleepers. The former QB and head coach was able to turn Carson Wentz into an MVP candidate (before he fell apart) and Nick Foles into a Super Bowl MVP, and might be able to get the most out of Lawrence, who started all 17 games in Jacksonville last year, throwing for 3,641 yards but just 12 touchdowns and 17 picks. He also ran for over 300 yards and a pair of touchdowns. Pederson may choose to throw the ball more now with the Jags, like he did in Philly and Lawrence is due for a sophomore bump to his numbers.

Winston has had two rough seasons in New Orleans, having played just 11 games of 33 potential starts. But when he was with Tampa, he was a fantasy juggernaut and there is a realistic chance he returns to that this season. Perhaps no team has a had a more improved slate of weapons than the Saints, who will have a returning Michael Thomas, target hawk Jarvis Landry and rookie Chris Olive running routes for Winston, who loves to sling the ball. It seems hard not to expect Winston will out-play his QB19 ranking at Fantasy Pros (and similar ones at other outlets).