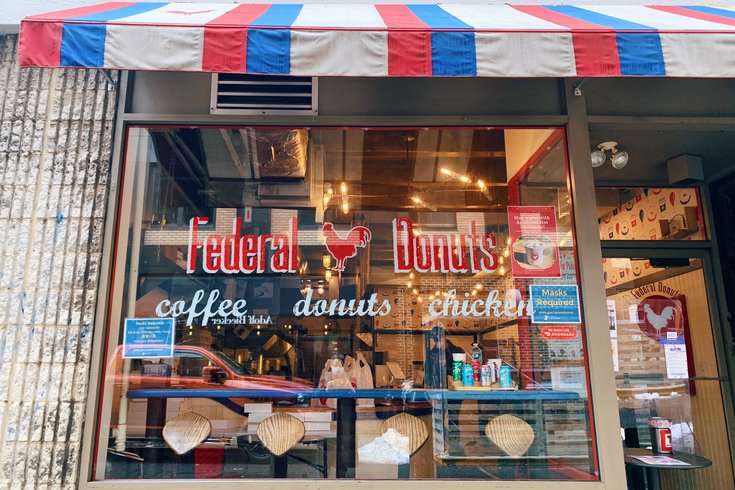 Federal Donuts' Center City shop is relocating to 1526 Sansom St. because its former location is being demolished as part of the construction of a residential tower. The now location opens Wednesday, March 17.

Federal Donuts will reopen its Center City shop Wednesday in its temporary location just one block from where it had been on Sansom Street.

The new shop will be at 1526 Sansom St., Federal Donuts said in an Instagram post Tuesday – the same storefront occupied by CooknSolo's former, Jewish, luncheonette-style restaurant The Rooster, which closed in 2019, and directly below the restaurant group's popular falafel spot, Goldie.

The Sansom Street Federal Donuts location had closed in February to make way for the impending demolition and development of the parking garage property on the 1600 block of Sansom Street to which the donut shop's store had been attached. A residential tower is being built by developer Southern Land Co. at the site.

New hours for Federal Donuts' Center City location will be Monday through Friday, 8 a.m. to 3 p.m. and Friday through Sunday from 8 a.m. to 6 p.m.

Federal Donuts' original Center City shop opened in 2012. There are eight other locations in Philly, which also is know for selling fried chicken, fries and coffee. Their doughnuts often come in unexpected flavors like grapefruit brûlée and Irish potato.

CooknSolo is led by Philly cooking giants Mike Solomonov and Steve Cook. Goldie, K'Far, Zahav and Abe Fisher are some of the other restaurants owned by the group.