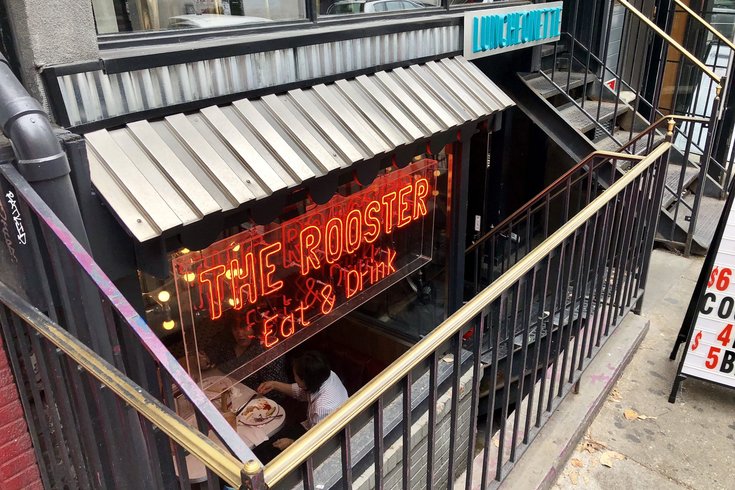 CookNSolo's The Rooster, the luncheonette which opened as Rooster Soup Company in 2017, is closing June 8.

The Rooster, Center City's Jewish luncheonette-style spot on Sansom Street from restaurant group CookNSolo, is closing at the end of the week.

The restaurant, which opened 2 1/2 years ago as Rooster Soup Co., operated in tandem with Broad Street Ministry as a not-for-profit restaurant, donating all of its profits to the ministry, a non-profit organization that describes itself as an "alternative church community" in Philadelphia.

CookNSolo partners Michael Solomonov and Steve Cook announced the decision Tuesday afternoon with a letter, which you can read in full at this link. Here are excerpts, including Solomonov and Cook explaining the decision:

"It is with sadness that we write to inform you that our restaurant The Rooster will close, effective June 8th. As you might expect, the cause is financial. Although the restaurant started strong two and half years ago, for well over a year we have been funding losses out of pocket in an effort to buy time for The Rooster to find its footing. For a restaurant whose fundamental premise is to generate funds for our non-profit partner, this has become an untenable and counterproductive situation.

"This is not the first restaurant we have closed and will likely not be the last. But while The Rooster will not live on in its current form, we feel compelled to reflect on what we have accomplished. Because somehow, this tiny, subterranean diner sparked a national conversation about the role of hospitality in building a just society.

"BSM’s Executive Director, Mike Dahl, confirmed that the value of The Rooster went far beyond just the dollars raised: 'We will always be so grateful to all of the generous people who helped to launch The Rooster — a first of its kind collaboration, to the Rooster staff for helping to teach us what radical hospitality really means, to all of the patrons who supported social justice through their patronage, and to Mike and Steve for their genuine compassion for and sacrifice on behalf of our most vulnerable neighbors.'"

The news comes just one month after CookNSolo's flagship restaurant, Zahav, won the 2019 James Beard award for Outstanding Restaurant, and a little more than a month after the restaurant group announced three new spots set to open in 2019.

K'Far, a bakery and cafe headed by Zahav's James Beard-winning pastry chef Camille Cogswell, is expected to open this summer, per Eater. Merkaz, a sandwich shop on Sansom Street, is scheduled to open in September. And Laser Wolf, a grill patterned after Zahav, is expected to open by the end of the year.

Last fall, the restaurant group closed its New York location of Dizengoff, contracting the CookNSolo footprint back to just Philadelphia. Solomonov and Cook also previously had Dizengoff and Federal Donuts locations in Miami, both of which closed in March 2018.