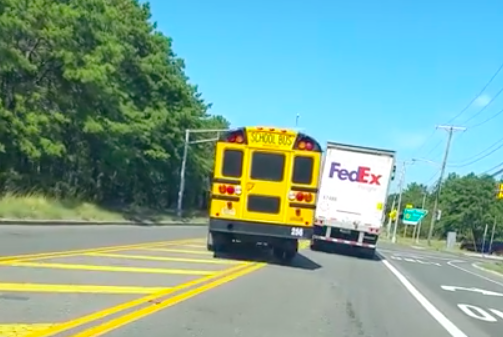 A South Jersey man was criminally charged Sunday in connection with an alleged road-rage incident involving a tractor-trailer and a school bus, authorities said.

The incident, which was captured on video by a motorist, occurred Sept. 14 near the Garden State Parkway in Lakewood.

The video shows the FedEx truck swerving in an attempt to prevent the school bus from trying to make a pass on a one-way road. Both vehicles were traveling against opposing traffic for a short time.

Authorities allege that Winiavski was operating the FedEx truck and tried to run the school bus off the road. Authorities said they also determined that the school bus driver, 68-year-old Morris Wilder, of Lakewood, was making an illegal maneuver but declined to charge him criminally.

Both drivers received multiple motor vehicle summonses for the incident.

Staffordsmith explained that Winiavski’s alleged actions normally would have warranted a simple assault charge because the two vehicles did not make contact and no injuries were reported. However, state law mandates that the charge must be elevated to aggravated assault because of the school bus.

Both men were reportedly fired from their jobs.

Winiavski was released on his own recognizance until his next court appearance.