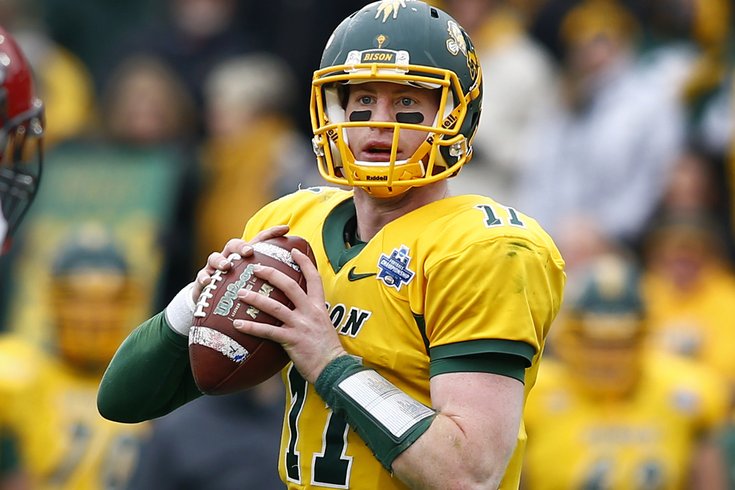 With the second overall pick in the 2016 NFL Draft, the Eagles will select... Carson Wentz, quarterback, North Dakota State.

Throughout the offseason, we've published five mock drafts, never repeating any players. This will be the sixth and final edition, unless, you know, the Eagles trade Sam Bradford or something.

There are no running backs or defensive linemen below, and yes, I agree those are unfortunate omissions. The simple fact of the matter is that the Eagles are not going to be able to draft every position they would like to unless they move current players for picks or trade back. The Eagles will not add players in the draft at every need area. I can guarantee you that right now.

With that disclaimer out of the way, here's our final Eagles only seven round mock draft:

There isn't much more to say about this pick anymore. It's either going to be Cal's Jared Goff or North Dakota State's Carson Wentz. With all indications that the Los Angeles Rams will be selecting Goff, Wentz will be become the new face of the Eagles' franchise.

In case you're unfamiliar with Wentz's game, we published a detailed profile of him waaaaay back in early December. It was published as if Chip Kelly would still be the head coach, but all the analysis about Wentz's strengths and weaknesses remains unchanged.

Cash doesn't play a ton of deep safety and is almost more like a linebacker. He has good size for a safety and plays with a physical demeanor. Watch him blow up the tight end here and make a tackle for loss against Florida State:

If Jim Schwartz is open to adding a linebacker/safety hybrid type, Cash could be a great fit, especially in sub packages. A highlight reel:

Boehm's Combine spider chart is, uh, not good. Here's how Boehm compares to centers competing at the Combine since 1999.

In other words, Boehm is not the most athletic guy in the world. His 10-yard dash of 1.91 seconds is atrocious. He is not going to remind anyone of Jason Kelce. However, what Boehm does is move defensive linemen off the line of scrimmage against their will, which is a rare trait for centers in the NFL these days. He also played 52 consecutive games at Missouri, both at LG and C, which means he'll play through pain, and he is regarded as a very smart player.

Robinson was suspended four times during his career at Florida, but the Eagles seem more willing to consider character issue players. Robinson's career numbers are somewhat unimpressive, partly because he missed time due to those suspensions.

27 receivers had more TD receptions last season than Robinson had in his entire collegiate career.

Still, Robinson does have talent. He is thought of as a speed guy, although he only ran a 4.59 40 at the Combine. You can see his athleticism here:

And then there's also Howie's #GatorBias.

The Eagles gave Kwiatkowski a little extra attention at the Senior Bowl, and then they reportedly met with him at West Virginia's pro day. And then they had him in for a pre-draft visit to the NovaCare Complex. Obviously, the Eagles have interest. Over the last three seasons, Kwiatkowski has racked up 275 tackles, with good pass breakup numbers in 2015 from his linebacker spot:

Kwiatkowski played safety in high school, and then all three linebacker spots as well as special teams for the Mountaineers. That versatility could make him a mid- to late-round target as a versatile reserve linebacker. He is also a physical tackler, which was a common theme from the acquisition the Eagles made in free agency for Jim Schwartz's defense.

Jim Schwartz has "a type," and that type is "physical," In that regard, Burris should be a clear player of interest. In his last season at NC State, Burris was credited with a grand total of zero missed tackles. The Eagles could look at Burris as an immediate contributor on special teams as well as depth at corner.

Ehinger has a good height-weight combination for a tackle, and while I believe he's more athletic than some give him credit for, he'll probably have to move inside to guard at the next level. Even with only seven picks in this draft, I believe the Eagles would be wise to draft two offensive linemen, and this is considered a deep offensive line draft.

So there you have it. No need to even watch the draft now.