Fink's crafts hoagies with a gourmet touch and Philly pride

An expert weighs in on one of Philadelphia's most popular hoagies 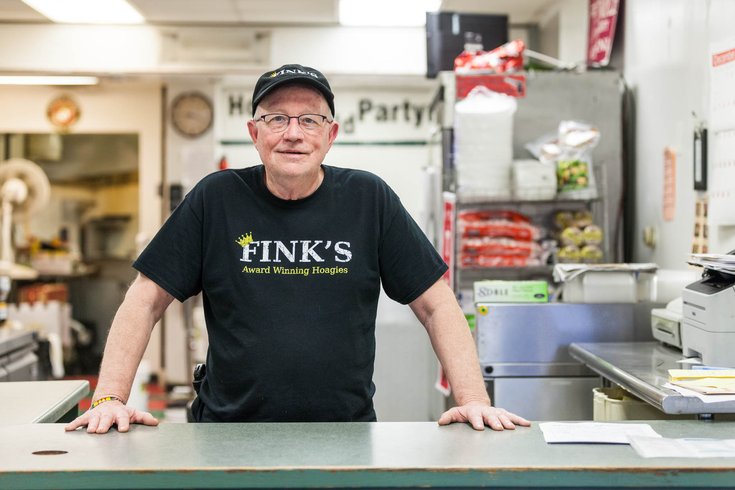 Dennis Fink, owner of Fink's Hoagies, at the counter of his Northeast Philadelphia location.

The cheesesteak is the iconic Philadelphia sandwich, the one food associated with the city throughout the nation, perhaps the world.

But hoagies are, if anything, more impressive – at least linguistically. Of course they are the same food as the subs found pretty much everywhere else, but the way Philly managed to hold onto its regional nickname is remarkable. Who today remembers the Garibaldis of Wisconsin or the torpedoes of San Diego? Even Pittsburgh, which once utilized "hoagie," has largely submitted to the universal tendency toward "subs."

It's that kind of hoagie pride that led Dennis Fink into the sandwich business.

Fink makes some of the best hoagies in Philadelphia. The proof is crammed into the narrow confines of his recently opened take-out counter on Jewelers Row, a section of Center City long deprived of worthwhile eateries. As hungry office workers crowd into the 1,000-square-foot shop, the line often stretches out the door and to the street, giving diners a chance to ogle some of the awards Fink’s has racked up over the years.

Despite all the accolades, Fink isn’t a lifelong restaurateur. He’s held a diverse array of jobs over the years: He fought in Vietnam with the Marines, worked for Republican Congressman Charles Dougherty, orchestrated the erection of the Vietnam Veterans Memorial, served in the office of Wilson Goode’s city manager, ran his own printing shop, and then worked in sales at the hyperlocal Northeast News Gleaner. When it became clear that the paper’s founding owners were going to sell, Fink decided to get out in 2003. He didn’t know what he’d do next, but he did know that he loved hoagies and couldn’t get one in his neighborhood.

In both Fink's locations, the “Original Italian Hoagie” is the big fave, accounting for about 30 percent of total sales. It differs slightly from the traditional Italian hoagie, thanks to a few subtle touches.

“I didn’t think anyone in the Northeast really made a great hoagie,” says Fink, a 36-year resident of Tacony until a recent move to Torresdale. “So I usually went down to South Philly for hoagies, but [one time] they were sold out. That day I dropped my wife off and I’m driving down Princeton Avenue and I see a guy walk out of his [sandwich] store and put a rent sign on it and…." Fink makes a loud screeching noise, as in the way he hit the brakes that day – to stop and check out the place.

The sale was accompanied with all the equipment necessary – including huge fridges and an electric meat slicer – and Fink spent the first month in business fooling around with ingredients and crafting his own spin on the hoagie. Beyond the original Italian, he offers a raft of “gourmet” hoagies named after the various neighborhoods of the Northeast closest to the river. The Tacony is a roast beef sandwich loaded with asparagus and provolone cheese. The Torresdale is his profoundly delicious spin on roast pork. And the Wissinoming features tuna with sharp provolone and roasted red peppers.

Both the Tacony and Jewelers’ Row locations are hole-in-the-wall takeout joints, with little seating and no eating areas. Just off the neighborhood’s Torresdale main drag, the shop on Princeton Avenue is a cornerstone of Tacony’s eclectic shopping district. It is further distinguished by its unique décor. A Russian SKS rifle, complete with bayonet, hangs on the wall, a token from Fink’s days in Vietnam, won after a battle in the jungle that he survived and its previous owner did not.

The new Center City location, opened in July features the same low prices: $6.48 for a gourmet hoagie and $6.02 for a regular, although the hoagies that sell best differ slightly at the two locations. The Pennyback bacon and turkey does well in the Northeast, while the corned beef sells four times better in Center City. In both locations, the “Original Italian Hoagie” is the biggest hit (accounting for about 30 percent of total sales) and differs slightly from the traditional Italian hoagie, thanks to a few subtle Finksian touches. 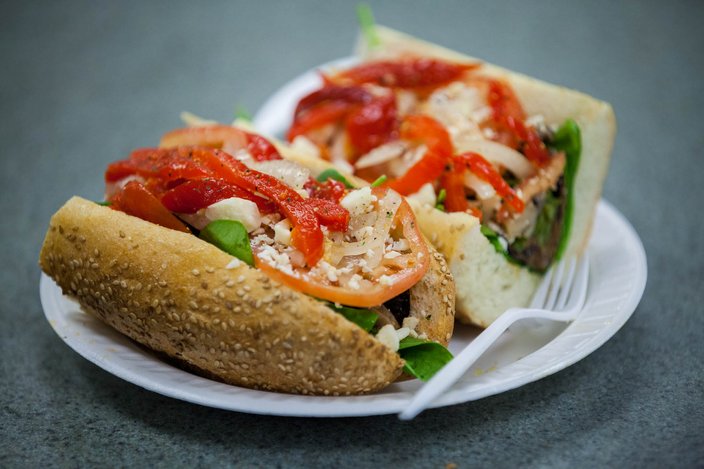 AN EXPERT SAMPLES THE KING'S FARE

A few weeks ago, Philly Voice brought one of the leading experts on hoagies, submarines, grinders, and po’ boys to sample the wares of the self-designated “King Of Gourmet Hoagies.” After sampling the “Original Italian Hoagie,” retired College of New Jersey professor Howard Robboy notes the differences between the King’s fare and the traditional style: the addition of olive spread and cotechino (basically boiled salami), the lack of prosciutto, and seeded French loaf from Liscio’s bakery in Glassboro, instead of the Italian roll.

Robboy’s career stretched decades, but he is best known outside academia for a pair of papers he wrote near the end of his college years, in 1967, on the immense diversity of names for subs (even before the expansion of the Subway empire). The first paper, entitled “The Submarine Sandwich: Lexical Variations In A Cultural Context,” includes a section on the etymology of the term hoagie, the only slang that receives such lavish attention. (Robboy is an Olney native, hence the specificity of his interest.)

“I’ve eaten a lot of hoagies in my day,” says Robboy, whose reputation as the guy to talk to about hoagies is such that he served as a federal witness in a trademark case in Tucson. (The term can’t be trademarked as a local deli learned to its chagrin).

“But I eat less than I used to because the older you get, the harder it is to lose weight," he added. "I don’t even have one a week…This is a good sandwich and clearly he is very popular, it was very crowded in there.”

When Fink and Robboy meet, they quickly establish the networks that link them across the neighborhoods of the Northeast. The conversation turns toward areas of common interest, chiefly the variations in the traditional recipe. Robboy traces the addition of mayonnaise, for instance, to the assimilation of the hoagie into general American culture, where businessmen couldn’t afford to get oil on their suits.

And then there is the perennial favorite topic: the origins of the term hoagie.

“I’d heard this story about Hog Island,” says the King, over a hot glass of Lipton’s around the corner from his shop.

“That’s a bunch of shit,” says Robboy, who launches into a monologue about Alfonso DePalma, the original king of the “hogies” – so named because his brother observed a couple workers eating them and declared “you’d have to be a hog to finish that.” DePalma coined the term for his sandwiches to differentiate them from the nearby competition in the 1930s, and it caught on. But due to the expansive vowels of the white Philadelphia accent, hogie became hoagie.

(When Robboy tracked DePalma down in West Philadelphia in the 1960s, the old man had lost both legs to diabetes but he was still cranking out the hoagies, and spelling them his original way.)

The conversation between two hoagie titans, and old school Philly guys – Fink grew up near K&A in Kensington – culminates in plans for a road trip to a few of Robboy’s favorite hoagie shops, chiefly DiCostanza’s in deepest Delaware County.

“Those sandwiches, they glide down your throat,” he murmurs appreciatively. And there is common agreement about where they will not go for hoagies, ever.

“I used to cringe every time Rendell would go up and say, ‘the best hoagies are at Wawa,’” says Fink, with evident disgust. “You want to smack him. That’s not a hoagie. That’s not even a good roll.”

That’s the problem with franchises, Fink says, before returning to Jeweler’s Row. The name doesn’t guarantee what you get, not like a personal commitment. Numerous attempts have been made to open up branches of his shop in the suburbs, but he doesn’t want his name on anything he can’t manage. It’s not really a hoagie if the sandwiches aren’t generously-sized and affordable to all.

“I’ve seen too many guys try to cheat and try to save money so they don’t put any meat on,” says Fink. “We don’t skimp. Consistency and being fair with people, that’s what it’s about. God bless America.”