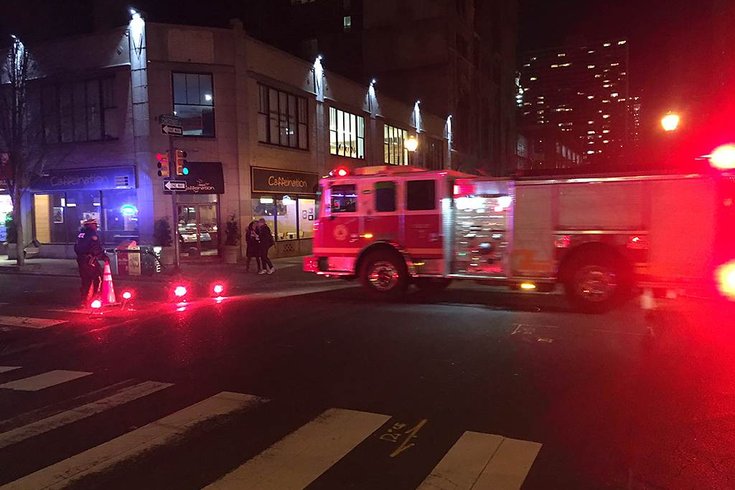 A fire truck blocks the intersection of 21st and Chestnut streets in Center City, near a fire that engulfed the roof of a building at 2212 Locust St.

A four-alarm blaze is under control after it broke out at a Center City apartment complex Tuesday evening, according to the Philadelphia Fire Department.

NBC Philadelphia reports that the fire occurred at a three-story apartment building at 2122 Locust St. Two firefighters were taken to the hospital to be treated for minor injuries.

The fire broke out around 5:30 p.m. A fourth alarm was struck around 6:30 p.m., 6ABC reports. The fire originated on the lower floor of the building, fire officials told the news station, and it was brought under control around 7:45 p.m.

Video and photos show from the scene show flames at the top of the building:

Another picture from SKYFOX of apartment fire at 21st and Locust in Center City. @FOX29philly pic.twitter.com/mcipyf1Hb9

@CBSPhilly a lot of respect for the Philly Fire Dept right now! Hope all are safe! ❤️ pic.twitter.com/yBQYdspmui

#BREAKING: Fire inside a Center City apartment. Near 21st/Chestnut. pic.twitter.com/P2N39RBayi

Officials are waiting until the fire is completely out to conduct an investigation and determine a cause. The Red Cross is assisting those displaced by the blaze.