Fishtown salon owner, struck by arsonist at home, left to pick up pieces 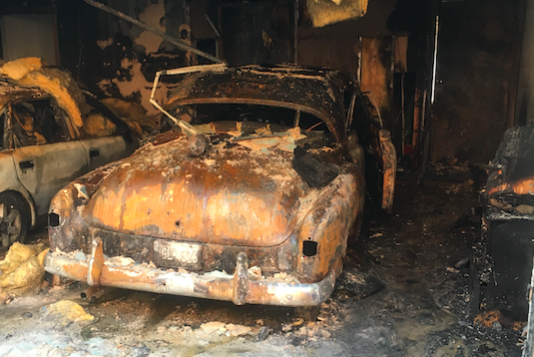 Jess Bernard, owner of The Parlour in Fishtown, lost her 1951 Chevy Bel Air after an arsonist struck her South Street home in the early morning hours of Oct. 30, 2016.

Jess Bernard might not have survived Sunday morning if not for a frantic call from her neighbor, a nurse who had to be awake at 5:00 in the morning to get to work.

Her home, an apartment at 719 South St., was in flames. Someone had entered an unmarked alleyway to the rowhome's open garage and lit her storage unit on fire. Bernard's 1951 Chevy Bel Air — a car she loved so much she named it Debbie — was engulfed by the blaze. 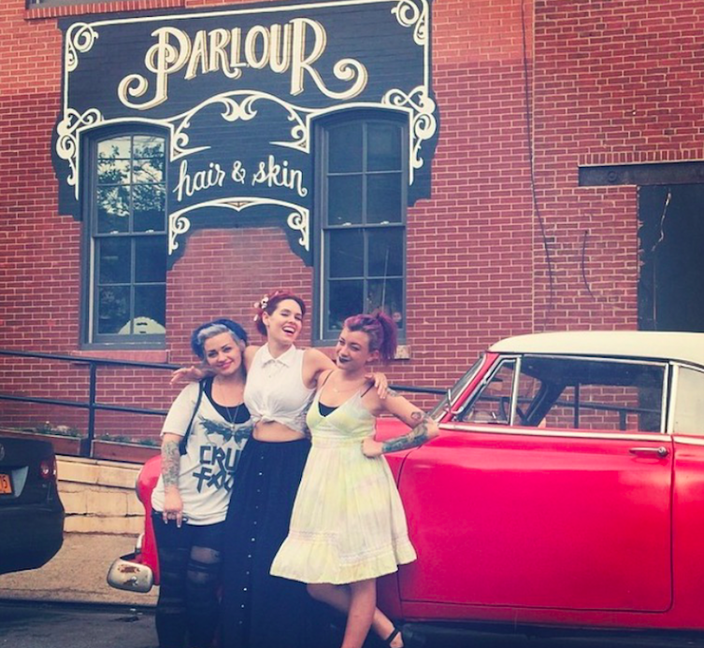 
"I was asleep on the third floor," said Bernard, who has owned the The Parlour Hair & Skin in Fishtown for the past five years. "I had to get rescued out of the second floor balcony. My whole house would have gone up if hadn't gotten that phone call."

A long stretch of South Street was completely shut down. Five fire trucks were sent to the property; a chemical sniffing dog assigned to determine the source of the flames.

"It was a scene for a minute there," Bernard said. At her shop and around town, she's known as Jess Parlour.

Bernard's neighbor captured some footage of the fire from a mounted home security camera. The suspect does not appear in the video below.

"I always leave my garage open because I have a classic car," Bernard said. "They need to be aired out."

Debbie blew up in the blaze. So did a neighbor's car sitting next to it.

"I had that car tattooed on my arm," Bernard said. "This sucks. It's the only thing I'm sick over."

What's worse, Bernard's insurance company won't cover Debbie's destruction because it didn't occur in a car accident. She didn't have renter's insurance, either.

Is there any other way to be prepared for something like this?

"It's so weird," Bernard said. "You hear about this stuff all the time, and you really don't know what it's like. When they first took me out of the house, I was so calm. I was just happy to get out alive."

The Philadelphia Police Department confirmed Tuesday the fire marshall's ruling that the cause of the duplex fire was arson. There were no injuries. Firefighters extinguished the flames and limited the majority of the damage to the shared garage. South Detectives are handling the investigation.

"When I realized it was arson, I felt so freaked out and sad that people do this," Bernard said. "Another part of me feels like it's just stuff, who cares? There are people who get (hurt) in fires, and they're mutilated or their families are dead. Half of me feels like I'm fine, and the other half is so creeped out."

Bernard's anchor in life is her shop at 1339 Frankford Ave., which is open seven days a week.

"Everything at work is running fine. The girls here are so cool," Bernard said. "But I have to put things back together."

As a temporary fix, Bernard is staying with her parents in New Jersey.

"My next immediate step is to get the furniture that did make it out of the building," she said. "Most of what (remains) is smoke damaged. I'd like to get another car and be able to move back into an apartment somewhere."

"I feel insanely overwhelmed with how sweet, nice and generous everyone has been," Bernard said. "I don't know how many people would have others do this for them."

Some in the community have speculated Bernard is the victim of a cruel mischief night prank. Bernard said she's not sure how that rumor got started, but that police are handling the investigation.

What would Bernard say to the person who left her without a home and her prized possession?

"I wouldn't say anything," Bernard said. "I just hope that they go to jail for a really long time. We just want to know who did it first. That's what's on my family and friends' minds."

Anyone with information about the fire should contact South Detectives at 215-686-3013. Anonymous tips can be made by calling 215-686-TIPS.