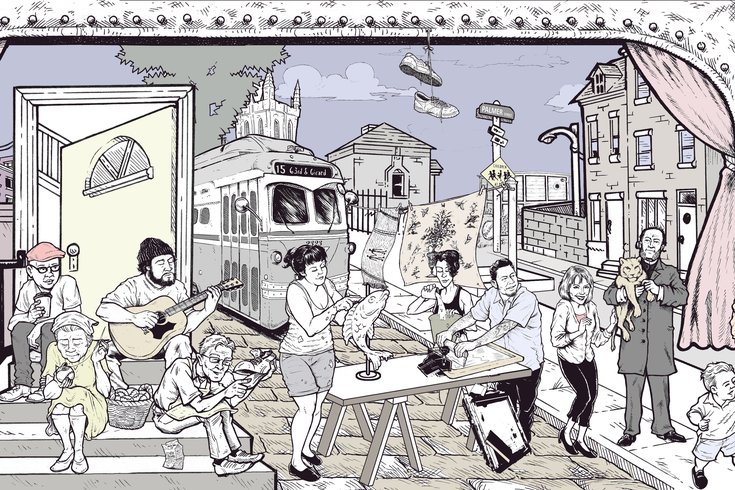 This mural design by Jeff Kilpatrick and Brad Carney was selected by online voters to be installed in Fishtown.

The votes are in and the winning design for the new mural going up at East Dauphin Street and Frankford Avenue, thanks to a contest held by Philadelphia Federal Credit Union and Mural Arts, has been decided. Jeff Kilpatrick and Brad Carney's subtle cartoon-style mural will be installed in May 2016.

The mural contest began this summer when PFCU put out a call for Fishtown and East Kensington artists to submit designs inspired by the neighborhood. In September, three finalist design teams were chosen: Kilpatrick and Carney, Marie Elcin and Emily White and Kien Nguyen. Their three designs were shown in a special two-week exhibit at the Fishtown PFCU location earlier this month so that the community could take a look before voting for their favorite online.

Earlier this month, we spoke with Carney about his team's design:

"As a community member I like to see a reflection of myself in murals," explained Carney, "so I would hope that any number of persons could see a reflection of where they live and see joy.
“I always like to have an emotional response in murals, so I would hope they would step away with that, with a sense of joy."
Points of reference for their design include iconic items of past and present, like milk bottles and Arctic Splash iced tea, with bricks, cobblestones and Fishtown's industrial warehouse textures.
"I'm a stoop culture kind of guy," Carney said. "There’s a prominent element of a stoop culture in it, and we’re trying to come at this with a neighborhood barbecue, party kind of atmosphere."

The community will also be able to participate in the making of this mural, with public paint days to be announced in early 2016. A dedication for the mural is slated for the 2016 Kensington Kinetic Sculpture Derby & Arts Festival in May.