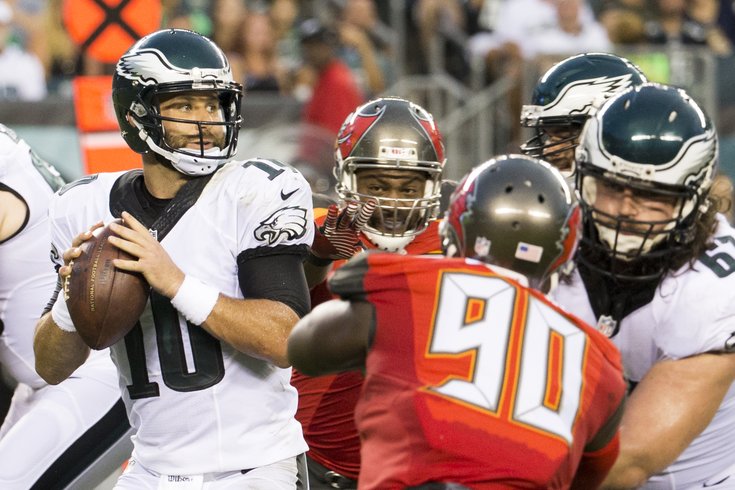 The calls for Carson Wentz to have an elevated role this season will get louder if Chase Daniel produces another stinker tonight.

In the second preseason game against the Pittsburgh Steelers, there are a number of Philadelphia Eagles players with something to prove tonight. Here are my top five:

Agholor's spot on the roster is safe, as the team isn't going to give up on him one year after he was the 20th-overall pick in the 2015 NFL Draft. But certainly, with the Eagles trading for Dorial Green-Beckham earlier this week, the pressure is on Agholor and the rest of the Eagles' receivers to step up their respective games.

In the first preseason game against the Tampa Bay Buccaneers, Agholor, Josh Huff, Rueben Randle, and Chris Givens combined for 3 catches for 11 yards and a fumble. The trade for Green-Beckham is a crystal clear message that the Eagles are not happy with the play they have gotten from their receivers.

With the likely suspension of Lane Johnson on the horizon, the Eagles shifted Barbre out to RT from his starting LG spot. This will be Barbre's first major test in his new role.

With Barbre's move to RT, that opened up a spot at LG, and Doug Pederson said that rookie third round pick Isaac Seumalo would get the start there Thursday night. Seumalo acknowledged that he had a poor game against the Bucs last week, but clearly, the Eagles are giving Seumalo every chance to win the starting LG job. Can he take advantage?

Daniel got no help at all from his receivers or offensive line in the first preseason game, but he didn't play well at all either. After a strong start to training camp, Daniel's play has fallen off. If he stacks another poor performance on top of the first one, the cries for Carson Wentz to be the primary backup are going to become much louder, and more justified.

Smith was thoroughly outplayed all throughout training camp by Steven Means, and then he missed some time after suffering a concussion. Smith's chances to make an impact are almost on empty. He needs to have a strong game, or he could be a goner.