Five over/unders for Eagles' Week 9 matchup against the Giants 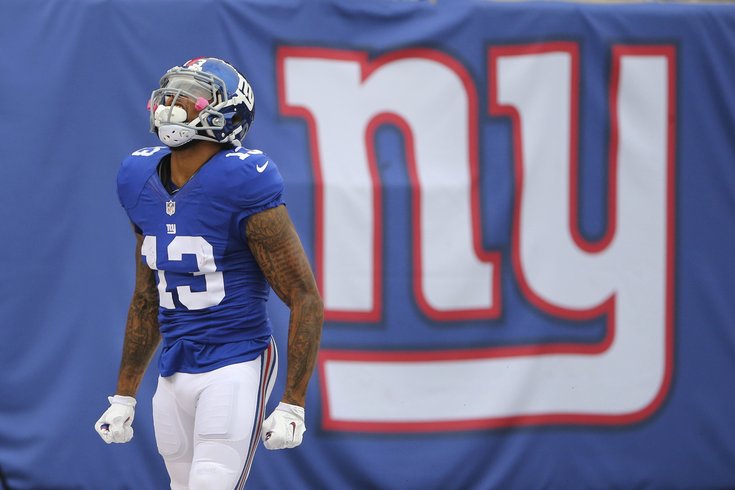 On Sunday, the Eagles will travel up the turnpike to face the New York Giants at MetLife Stadium in East Rutherford. For the third time in the last month, Carson Wentz and the Birds will be playing a divisional road game -- they're 0-2 in the NFC East so far this season.

Their Week 9 matchup with the Giants also represents the third time in as many weeks that their opponent is coming off the bye, giving them extra time to rest up and prepare.

Against the Cowboys on Sunday night, much of the talk heading in revolved around the two rookie quarterbacks squaring off for the first time. But when it was all said and done, the late-game clock management blunders by Eagles coach Doug Pederson were the thing everyone was talking about. And this time around, he'll be facing a fellow rookie coach in Ben McAdoo, who took over for Tom Coughlin in the offseason.

As a new era begins, could the momentum swing back in the Giants favor? Or will the Eagles continue their recent domination of their neighbors to the north?

Here are five numbers to keep an eye on this Sunday:

That's currently the line be offered at topbet.eu. Over the last month, the Birds have hit the over in three of four games. The Giants, on the other hand, have been under in three of their last four. Neither offense is lighting up the world, and the Eagles defense is plenty capable of holding New York to a low number.

None of that, however, seems to matter when these two teams meet at MetLife. Since the stadium opened in 2010, they've put on quite the scoring display:

That's an average of 54.5 points per game. That number was somewhat bolstered by Chip Kelly's uptempo offense, but don't forget that he only coached two games there -- he was fired before their Week 17 matchup at MetLife last year. And since all three of us predicted the over in our weekly picks, I'm going to stick with that.

In four career games against the Eagles, OBJ is average 6.5 catches and 82 yards per game (to go with two touchdowns). But those numbers are somewhat skewed by a huge game back in his rookie year.

This season, Beckham is averaging just over 5.5 receptions and 90 receiving yards per game, both career lows for the third-year wideout. He is, however, averaging a career high of 15.8 yards per catch. That being said, over one-third of his 630 receiving yards this season came in one game -- he broke out for 222 yards and a TD on 10 receptions two weeks ago against the Ravens. And if you add in the 121 yards he gained against the Redskins, you really begin to see how frustratingly inconsistent he's been to fantasy owners and Giants fans alike.

The question is, which Beckham shows up on Sunday? He's been a much better player at home, and that doesn't bode well for the Eagles, who have struggled on the road this season. If they can keep him from getting open deep down the field, that will go a long way towards beating the Giants. Because if we've learned anything from the Eagles, a whole bunch of short receptions are nice, but most likely not enough to win you the game. Beckham can have his catches, just so long as they don't turn in to big gains.

Perhaps the biggest surprise from Sunday night's loss to the Cowboys was the increased role played by running back Darren Sproles. Early in the week, we took a look at why that kind of workload is not sustainable for the diminutive 33-year-old vet.

The real surprise was the fact that he carried the ball 15 times, almost double the number of carries combined by the other three Eagles running backs and his most since last year's win over the Patriots (he also had 15 carries). ... He's only carried the ball more than 15 times twice in his career -- he hasn't done so since 2009 -- and his 20 offensive touches against Dallas matches the second most in a game since he came into the league in 2005.

His 86 rushing yards were his most in a game since 2011, but at least he doesn't fumble. Mathews, who had two fourth-quarter fumbles in his three previous games, appeared to have fallen out of favor, but as Pederson said this week, that was more about riding the hot hand and less about Mathews' struggles holding on to the ball.

Against the Giants, look for Mathews to reclaim his spot atop the depth chart and again lead the Eagles in carries, something he's only done in four of their seven games this season.

The Eagles are currently tied for second in the league with 22 sacks through their first seven games, or just over three per game. And their front seven can do a lot to help the secondary contain Odell Beckham Jr., Victor Cruz, and the rest of the Giants receivers by putting consistent pressure on Eli Manning.

But that's easier said than done. Through his first seven games this year, Manning has been sacked just 10 times, and over his last four games, he's only been brought down multiple times in one. Meanwhile, the Eagles defense has recorded eight sacks over its last two games and has done a great job getting to the Giants QB recently. In their last four matchups, Manning has been sacked a total of 11 times.

In Sunday's loss to the Cowboys, the Eagles were hit with fewer penalties than their opponent for just the second time all season (the other was in their Week 2 win over the Bears). Their five penalties were also tied for their fewest accepted penalties in a game this year (five).

While off-field discipline remains a problem for Pederson's squad, they Eagles have seen a drastic improvement over the last two weeks -- even though they still average the third most accepted penalties against in the NFL (8.71)

Penalties (like turnovers) can be a great equalizer on Sunday. And against a Giants team that, at least on paper, the Eagles should beat, keeping penalties to a minimum will be important in they hope to pick up that first division win of the season. A repeat of their performances against Detroit and Washington, and it could be a long day for the Birds.

That being said, you have to like the direction the Eagles are heading in this department. This is not the game in which you want to see a regression, especially since their opponent is eight-best in the NFL at six accepted penalties per game.