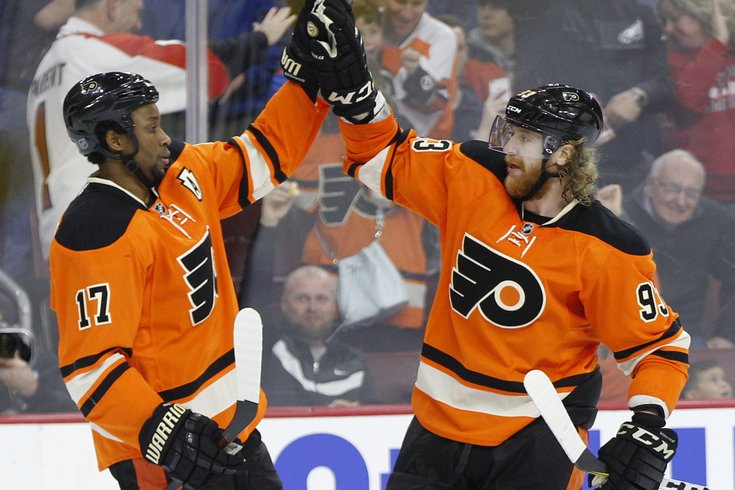 Wayne Simmonds and Jake Voracek celebrate during the Flyers' 3-2 win over the Sens.

The Philadelphia Flyers were 12-3-2 in their last 16 games heading into the weekend. And while that's been enough to move them into playoff position, they haven't been afforded much breathing room and need to earn as many points as possible over the last five games of the season.

With big games against Pittsburgh and Detroit on the horizon, Dave Hakstol's team needed to make sure to take care of business on Saturday. And that's exactly what the Flyers (39-25-13) did, beating the Ottawa Senators, 3-2, at the Wells Fargo Center for their sixth win in their last seven home games.

It wasn't easy -- and at times it wasn't pretty -- but in April, two points are two points, no matter how you go about getting them.

Here's how things played out in South Philly:

•    Not to sound like a broken record, but Steve Mason was excellent again. He's now started 13 straight games (9-2-2) for the Flyers with backup Michal Neuvirth sidelined, and over that span has posted a .934 save percentage and a 1.92 goals against average. Not too shabby.

Against the Senators, Mason stopped 33 of 35 shots, including this one against Mike Hoffman on a breakaway in the second period:

And even when he did find himself out of position, he was able to get some help from his teammates. Like Pierre-Edouard Bellemare, for example.

•    Hello, power play. The Flyers were just 3-for-24 with the man advantage in their previous seven games, but against the Senators, all three of their goals came on the power play. They finished 3-for-4 in the game. Part of that could be due to the fact that Ottawa had one of the worst PK units in the league heading into Saturday's game (29th, 75.9 percent), but it was still nice to see a spark from a Flyers' special teams that had been struggling as of late. The Flyers didn't look great on the kill, albeit in limited chances, allowing the Sens to score on their only opportunity.

•    Wayne Simmonds is ready for the playoffs. He scored twice (both on the power play) against the Senators, putting him to 28 goals on the season. His first gave the Flyers a 1-0 lead early in the second period and was vintage Simmer.

Flyers grab the lead on the Power Play! #FlyersTalk https://t.co/aLaXTJkFgi

His second came early in the third and would up being the game-winner.

•    Anyone who's been following the Senators shouldn't be surprised that the Flyers were able to get on the board first.

That's the 50th time this year the #Sens have given up the first goal. Incredible.

By comparison, the Flyers have allowed opponents to score first 39 times this season, which isn't great ... unless you compare it to the Senators.

•    The other Flyers goal came off the stick of Sean Couturier, who has six points in his last seven games.

If you don't score on the first shot, try again.

Jake Voracek and Brayden Schenn finished with two assists each.

The Flyers take on the Pittsburgh Penguins Sunday night at 5 p.m. before heading to Detroit to face the Red Wings, who they currently lead by two points for the final wild-card spot in the Eastern Conference.