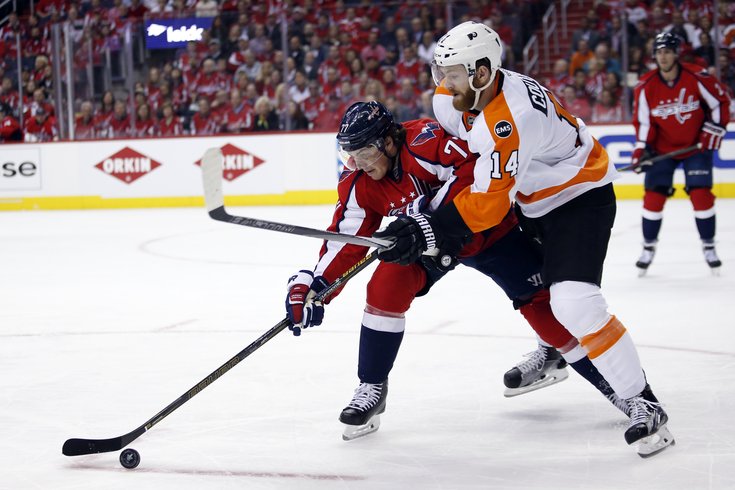 Flyers forward Sean Couturier suffered an upper-body injury in Game 1 and is reportedly done for the series.

The Philadelphia Flyers may be facing a steeper climb out of the first round of the Stanley Cup Playoffs than their 1-0 deficit to the Washington Capitals indicates.

They'll have to come from behind against the top-seeded team, and do so without one of their best young players, Sean Couturier. He suffered an upper-body injury in the second period on this hit from Alexander Ovechkin and did not return to the game.

But at least the Capitals weren't gloating over the injury or anything...

According to Tim Panaccio of CSN Philly, Couturier is done for the series.

Couturier has an A/C sprain to left shoulder. Done for series

If that's the case -- a formal announcement is expected by Friday morning -- the loss of Courtier could prove more costly than the loss of the game itself. This season, the team was just 5–9-4 in 18 games without the 23-year-old center. And if the second half of Game 1 was any portent of things to come, his absence doesn't bode well for the Orange and Black.

After a scoreless period and a half to start the game, the Capitals struck first -- on the man advantage.

With Couturier, the Flyers' best penalty-killing forward in the locker room, Brandon Manning knocked a puck over the glass and out of play in the defensive zone. And although it was a questionable call at best, the Capitals went on their second power in less than three minutes.

That, finally, allowed Washington to put one past Steve Mason, who was nothing short of brilliant in net. Even then, it took a deflection at the point, tons of traffic in front and a bouncing puck to beat the Flyers’ goaltender Thursday.

The second-period goal from John Carlson proved to be the difference -- Jay Beagle would add another late in the third to put the game away -- as Braden Holtby and the Caps shut out the Flyers, 2-0, in the game and take a 1-0 series lead.

Here's more on the game:

•    The good news for the Flyers is that Steve Mason proved more than capable of shutting down the Caps. He made 29 saves on 31 shots and was the main reason the Flyers were still in the game until late in the third period. them in the game. But this one in the first period was just filthy. As Jim Jackson said on the CSN broadcast, it was “right-handed robbery."

Oh, you want to see it one more time? Why not?

There was also a stretch in the second period in which it seemed like Mason made 10 saves -- including this one -- in rapid succession.

•    The Flyers finished the game 0-for-4 on the power play, including three chances in the first period. The Capitals, meanwhile, finished 1-for-6 on the power play. While that's pretty good work for the Flyers against a dangerous Caps' special teams, they'll need to do a better job staying out of the box moving forward, especially if Couturier remains out.

•    This game was fast and physical -- even for a playoff game. Hell, there were even a few fights. One of them involved Wayne Simmonds taking a five minute major late in the third period. Not exactly what you want from hottest scorer, but given how the Flyers looked in the minutes leading up to that fight, they definitely needed a spark.

Wayne Simmonds the GOAT throws down on Tom Wilson pic.twitter.com/irtgvG77sS

Although I'd give Simmonds the win by decision, it didn't do the trick.

•    Prior to the game, the Capitals honored Flyers founder and chairman Ed Snider, who passed away Monday, with a moment of silence. It was very well done -- and there weren't even any "Flyers suck!" chants.

Capitals with a classy gesture with a moment of silence for Ed Snider. pic.twitter.com/sdPgyTVfQ4

The Flyers also wore these patches in rememberence of Snider.

Here's the patch the #Flyers will be wearing to honor Ed Snider. pic.twitter.com/ncVvX7TJGU

Game 2 is scheduled for Saturday night at 7 p.m. as the Flyers will attempt to even the series before it heads to Philly for Game 3 on Monday night.