One horrible person's actions should not define nearly 20,000 people who honored a rival's heart and soul

Consol Energy Center, home of the National Hockey League’s Pittsburgh Penguins, has a maximum capacity of a shade under 20,000. The Penguins, of course, are one of – if not the biggest among – the Flyers’ rivals.

They started their playoff schedule on Wednesday night with a 5-2 win over the New York Rangers, a team that also qualifies as one of – if not the biggest among – the Flyers’ rivals.

Before the game, the Penguins asked for a moment of silence in memory of Ed Snider, the Flyers’ owner who died Monday after a two-year battle with cancer. During those 11 seconds – which you can watch on video via this link – someone in the stands felt the need to scream “Flyers suck!”

That was not a nice thing to do. In fact, it was downright ignorant.

But, here’s the thing, and it runs counter to a portion of social-media reaction to said moment of shame: Just like how you weren’t responsible for throwing snowballs at Santa at an Eagles game or puking on a little girl at a Phillies game, it’s pretty dumb to blame all Penguins fans for the actions of their (likely drunken) lout.

When you watch the moment of silence, it becomes perfectly clear that Penguins Nation respectfully paid respects to the legacy of Snider, who probably didn’t like them all too much in his professional life, either.

I talked to my friend Todd from Pittsburgh about it on Thursday morning. He’s a big Penguins fan and he knows I abhor the team for which he roots. It’s often a source of fun discussion! Here’s what he had to say:

“For a city that had a jail in its football stadium, batteries thrown at baseball players and snowballs thrown at Santa Claus, I’d think Philadelphians would understand that such douchebaggery should not define a fan base."

It was one of very few times we’d agreed on anything as it pertains to the Flyers, Penguins and the moral standing of major cities on opposite ends of Pennsylvania. 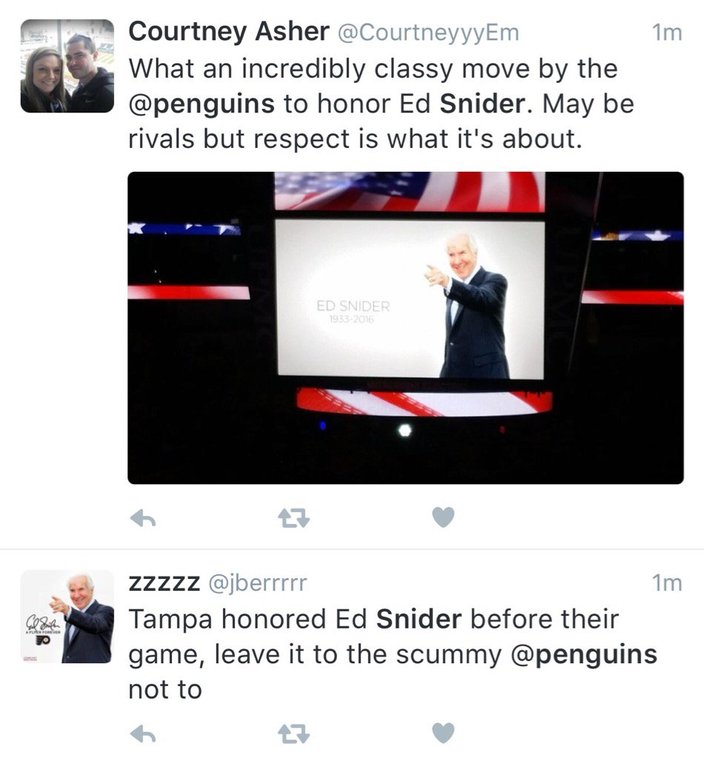 So, let this become a teachable moment. Just because people root for different teams doesn’t mean they’re your mortal enemy.

No matter how much you personally disdain the Penguins, headlines, tweets and Facebook status updates that lay blame upon “Penguins fans” instead of “A Penguin fan” do nothing but erroneously stoke fires that shouldn’t exist in the first place (even if there were a couple aural ripples heard after the yell).