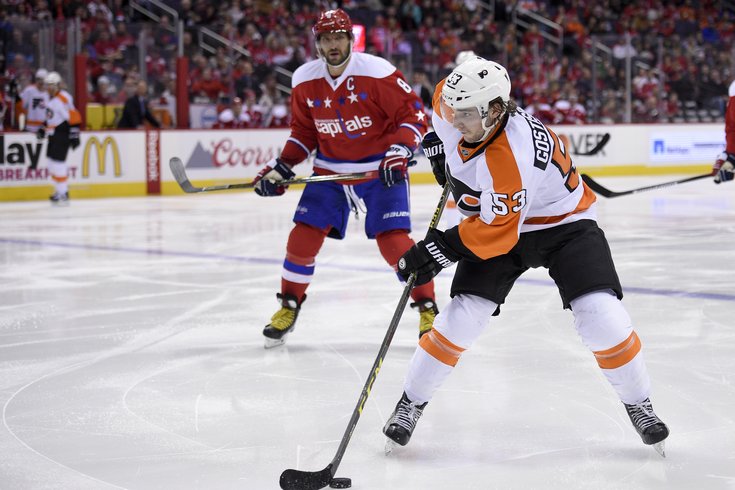 Rookie Shayne Gostisbehere could have a big impact on the Flyers' series against the Capitals.

Unlike the NBA -- the professional league with the playoff format most similar to hockey -- the NHL postseason has seen its fair share of major upsets in the first round. In 2012, the Los Angeles Kings needed all 82 regular season games to clinch a playoff berth, but they went on to win the Stanley Cup.

So there's something to be said about a team being hot at the right time. And this season, that team has been the Philadelphia Flyers.

Written off after the first two months of the season, rookie coach Dave Hakstol has his team playing its best hockey heading into the playoffs. Over their final 25 games, they Flyers went 16-6-3; their 35 points in that span were second in the Eastern Conference to only the Pittsburgh Penguins (38) and are tied for third in the entire NHL.

But when they open their postseason schedule on Thursday night, they'll be facing a Washington Capitals team that locked up the Presidents Trophy months ago -- or maybe it just feels that way. Luckily for the Flyers, they've had some success against Alexander Ovechkin, Braden Holtby and the Caps.

The teams split their four regular season games, with the Flyers needing some extra time in both their wins (one in overtime, one in a shootout). Sure, it's not something to hang your hat on, but compared to some of the other Eastern Conference playoff teams, this matchup is as good as any of the other top seeds they could have faced, namely Pittsburgh and Florida.

That being said, we'll know a whole lot more once the games are actually played.

•  TV: All games will air locally on ComcastSportsnet -- with the exception of Game 6, which will be broadcast on NBC.

And now, on to our predictions for the series...

As we wrote yesterday, the Flyers’ late push provides some optimism, especially when paired with the Capitals dialing things down after they clinched the Presidents’ Trophy. The numbers guys place an emphasis on how well the Orange and Black have played well over the past 25 games. Also, the Flyers don’t have to flip any switches after playing meaningful games for the past few months.

That said, the top-six that Barry Trotz gets to roll out every night is no joke: Ovechkin, Kuznetsov, Backstrom, Oshie, and oh yeah, Justin Williams just for kicks. I’m not sure that the Flyers defense is going to hold up against that group over seven games. Steve Mason has been an ironman down the stretch, and he’ll have to outplay Braden Holtby, the Vezina favorite who tailed off a little bit after the All-Star break.

Let’s say Caps in 6. The Flyers have more than a puncher’s chance in this series, though.

No, I'm not crazy. There's just something about this team that makes me think they're going to go on a bit of a run in the postseason. Not only did they clinch a playoff berth on the second-to-last day of the regular season, but they also have a little something extra to play for after the passing of team founder and chairman Ed Snider.

To people outside the area, the loss of an owner might not seem like a big deal for the guys on the team, but Snider's relationship with his players went well beyond that of a standard owner-player dynamic -- and that was made quite clear in the statements made by the team following his death Monday morning. And the numbers back that up...

Flyers were 15-14-7 (1.03 points/game) before visiting Ed Snider at his California home in December.

Beyond the sentimental factor, the Flyers are good enough to beat the Caps in a seven game series. And while the Caps may have an advantage with the forwards Rich mentioned above, the Flyers match up fairly well with their first-round opponents. Add to that the fact that Steve Mason has been playing better than Braden Holtby down the stretch -- not to mention the emergence of the GhostBear -- and the upset suddenly doesn't look that surprising.