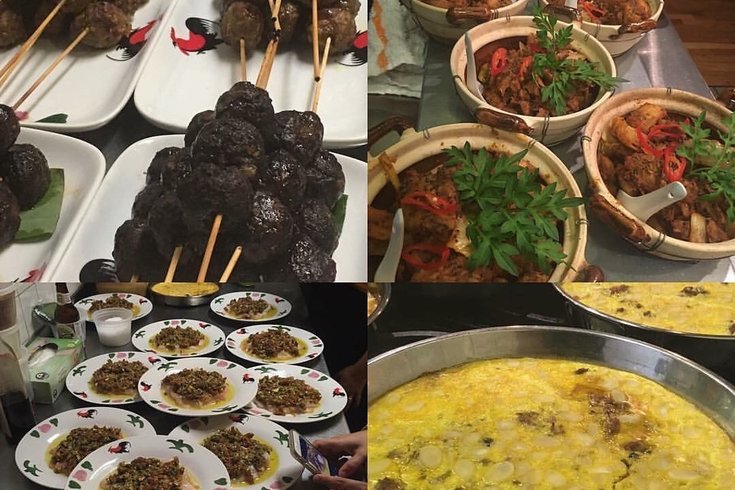 A sampling of the plates put forth by chefs at June's Muhibbah dinner.

“After living in Philly for 17 years, I’ve seen so many cultures here, and the word muhibbah just keeps coming to mind.”

Ange Branca, co-owner of East Passyunk’s Sate Kampar restaurant is referring to a Malay term without a direct translation. It’s a harmonious word that conveys a beautiful concept of people from different backgrounds coming together to share, celebrate and exchange diverse experiences. And that’s exactly what Branca and co-coordinator, Anita Davidson, are going for at tonight’s Muhibbah Dinner, an ongoing series that's diving deep into Philadelphia’s diverse dining scene.

“This country wouldn’t exist without immigrants and refugees, and people often forget that,” says Davidson.

But this immigrant culture isn’t hard to forget when strolling up and down the stretch of Passyunk Avenue, where Sate Kampar is situated. Within just a few short blocks, there are British pies shops, Abruzzese pasta places and internationally influenced dumpling destinations cozying up next to sleek BYOs where Branca deftly recreates the southeast Asian flavors that she grew up with.

Since transitioning from international business into the world of restaurant ownership back in 2016, the concept of muhibbah has been a constant on Branca’s mind.

“I’m really fortunate to be exposed to all of these different communities within the restaurant industry — front of house, back of house, the kitchen, dishwashers, even our diners,” she says.

“It’s just amazing. They’re all made up of generations of the past and present of this country.”

Davidson and Branca met through a shared love of Malaysian food, a taste that Davidson discovered during a trip in her college days.

Last November, around the time that President Donald Trump was elected, the two began brainstorming ideas to shine light on the immigrant and refugee communities whose futures were quickly becoming uncertain under the new administration.

While in school, Davidson had worked with Jewish cookbook author Joan Nathan, helping to organize Sips & Suppers, a chef-driven fundraiser devoted to fighting hunger and homelessness in the D.C. area.

“Ange knew about the work that I did and asked me to help. She knew that I was looking for opportunities to give back and help the community, so she called me and told me about her idea.”

Branca’s concept was a series of chef collaborations celebrating the generations of immigrants and refugees that contribute to the rich landscape of the city’s restaurants.

After months of planning, the first dinner came together in June.

We focused diligently on having diversity on the menu but also wanted to make sure that there was diversity at the table."

Branca welcomed six chefs and 50 guests to her restaurant. The menu spanned continents with flavors of South Africa, the United Kingdom, Sicily and Southeast Asia, all sitting comfortably, side-by-side, in her warm dining room.

Cooking in an open kitchen, chefs were encouraged to share the origin stories of their dishes.

“We focused diligently on having diversity on the menu but also wanted to make sure that there was diversity at the table,” Davidson explains.

When diners purchased tickets, they had the option to sponsor a seat at the table for a refugee. At the first dinner, ticketed diners were joined by newcomers from Uganda and Burma encouraging conversation that went above and beyond the usual table talk. Proceeds from the event benefited HIAS, a foundation that resettles and protects refugees from all over the world.

“It’s such a positive event,” Branca says. “It’s a reaction but not a protest. It’s a way of bringing out all of the positive aspects of Philadelphia – what we’re getting and how we can appreciate it.”

The second Muhibbah Dinner is happening on Monday, Oct. 23, and promises to bring the same spirit of convivial celebration to bigger digs at Front and Palmer streets in Kensington with Feast Your Eyes Catering.