Forecasters: Up to 2 feet of snow possible for the weekend

There is still some uncertainty regarding the storm's timing and track 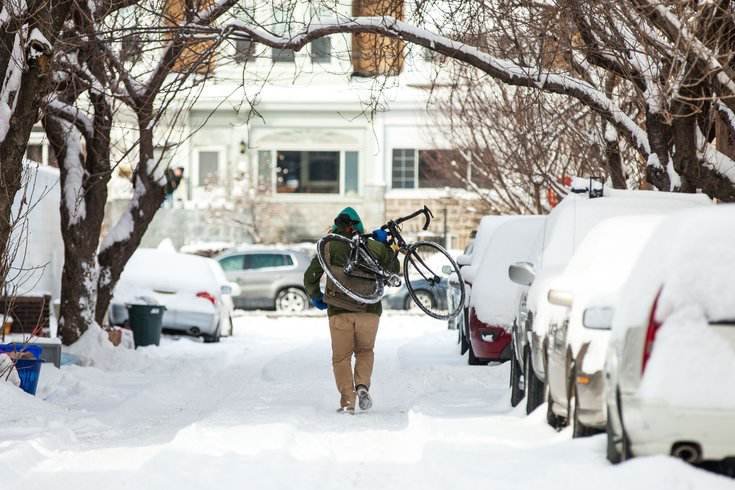 The snow could again be deep this weekend, forecasters say.

The National Weather Service on Tuesday is expressing "high confidence" for a major winter snowstorm on the weekend.

Heavy snow is forecast for the I-95 corridor from Washington, D.C. to Boston, with the storm moving into the Philadelphia area Friday night and continuing into Sunday "with the [surface] low's anticipated track and swath of high liquid equivalents supporting 1 to 2 feet near and northwest of I-95," according to the National Weather Service Weather Prediction Center in College Park, Maryland.

Periods of snow are likely to Friday afternoon and into the night across much of the region, the weather service said. Heavy snow likely at times, and snow may mix with sleet and rain south and east of I-95 for a time. Winds will be strongest at the shore.

Major coastal flooding at Jersey Shore and Delaware beaches is expected with strong onshore winds and a full moon Saturday. Some property damage and beach erosion can be anticipated.

The National Weather Service issues maps showing expected snowfall amounts 72 hours ahead of winter storms. The first map, released late Tuesday afternoon, shows the beginning of the storm – through 8 p.m. Friday night. The map will be updated Wednesday – and beyond – and begin to show what snow amounts can be expected from the storm, according to Gary Sazatkowski, meteorologist in the Mount Holly office of the National Weather Service.

Forecasters said there is still some uncertainty with the timing and track of the storm, and the strength of a low pressure system as it moves across the Southeast Friday and then off the Carolina coast on Friday night, before tracking northerly up the coast.

The storm's potential includes both snow and rain, and strong northeast wind gusts of 25 to 45 mph, and 60 mph gusts on the coast on Saturday. NWS says the latest weather models indicate the snow/rain line looks to move northward from southern Delmarva and southeast New Jersey toward the I-95 corridor in Philadelphia from late Friday night to Saturday before eventually retreating back south and east to the coast toward late-day Saturday. 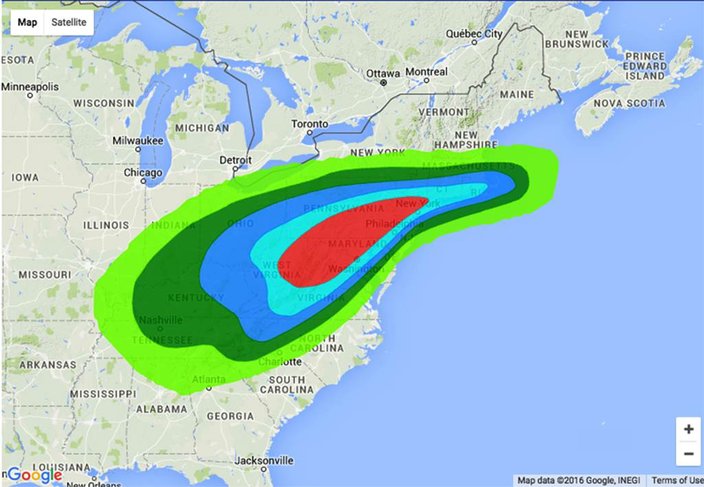 This experimental 4 to 7-day winter weather outlook shows the probability of at least a quarter-inch liquid equivalent of snow/sleet. An inch of liquid precipitation equals, on average, about 10 inches of snow.

It wouldn't be the first time that significant snow fell in Philadelphia from Jan. 22-24. In 1935, the snow started falling on Tuesday, Jan. 22 and didn't stop until Thursday, Jan. 24. By the time it was done, 16.7 inches of snow were on the ground, the sixth biggest accumulation (unofficially) in Philadelphia history. In 2005, another storm hit on Jan. 22, a Saturday, and by the time the snow stopped the next day, anywhere from 8-18 inches was measured in parts of Eastern Pennsylvania and New Jersey.

After the current storm moves through on Sunday, conditions will improve through the day, with skies clearing gradually and winds diminishing, the National Weather Service says. Temperatures will be near-normal, with highs mainly in the 30s for the region and some lower 40s for South Jersey.

Getting to the weekend will mean dealing with the frigid night-time temperatures for a bit longer. The high Tuesday will be near 27, with a low around 19 at night, and those cold winds persisting.
Camden County officials have announced a Code Blue Emergency from 6 p.m. Tuesday to 7 a.m. Wednesday, which alerts municipalities with homeless populations, situational homeless or transient populations are expected to activate their response plan to accommodate their immediate needs.
Temperatures will rebound slightly on Wednesday, and we may see a bit of snow at night.

Here is the National Weather Service forecast through Sunday night:

A chance of snow showers between 8pm and 4am. Mostly cloudy, with a low around 23. West wind around 8 mph. Chance of precipitation is 30 percent. New snow accumulation of less than a half inch possible.

A chance of snow after 9am. Mostly cloudy, with a high near 34. Chance of precipitation is 50 percent.

Snow, mainly after 8pm. Low around 28. Blustery. Chance of precipitation is 90 percent.

Snow. High near 35. Breezy. Chance of precipitation is 90 percent.

A chance of snow. Mostly cloudy, with a low around 26. Blustery. Chance of precipitation is 40 percent.

A chance of snow. Mostly sunny, with a high near 38. Chance of precipitation is 40 percent.

Partly sunny, with a high near 40.