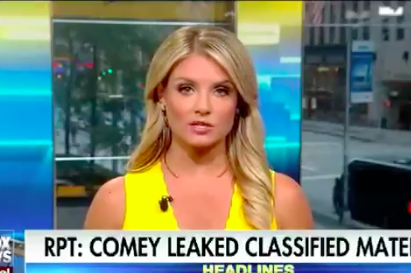 A reporting error made Monday morning by "Fox & Friends" anchor Jillian Mele, the former "Breakfast on Broad" and CSN Philly host, prompted the show to issue a clarification Tuesday morning as President Donald Trump failed to remove a tweet referencing the misinformation.

The segment in question cited a report from The Hill about former FBI Director James Comey's memos on his meetings with Trump, who fired Comey in May amid a widening investigation of the administration's possible ties to Russian interference in the 2016 election.

While the report noted Comey's memos contained classified information, Mele characterized the material as "top secret" rather than "secret or confidential," as The Hill's John Solomon wrote. The difference goes beyond semantics.

James Comey leaked CLASSIFIED INFORMATION to the media. That is so illegal!

In June, Comey testified before Congress that he considered the memos private documents exempted from the FBI's policy preventing the release of classified documents. He later leaked at least one of the memos to a Columbia law professor who went on to share it with a journalist at The New York Times.

The Hill's report suggested Robert Mueller, special counsel to the Justice Department in the Russia investigation, and members of Congress will now have to weigh whether Comey's memos mishandled, improperly stored or improperly shared classified information.

On Tuesday morning, "Fox & Friends" issued a clarification to explain that its report on Comey mistakenly stated that he shared "top secret" information.

😂 welcome to the week! pic.twitter.com/2Lqr4Uevb2