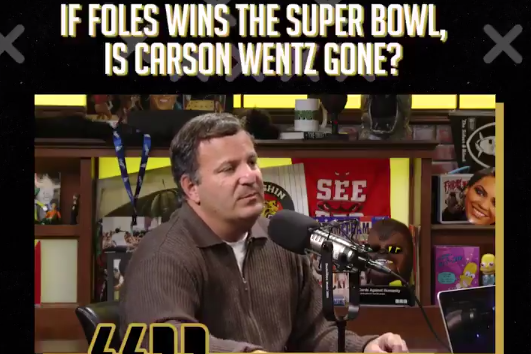 If you have followed the Philadelphia Eagles closely all season long, you'll undoubtedly remember that former general manager Mike Lombardi infamously opined that Doug Pederson “might be less qualified to coach a team than anyone I’ve ever seen.”

In case you missed all that, here's the video:

That scorching hot take backfired in grand fashion, as Pederson proceeded to go 13-3 during the regular season, and then won two playoff games despite the absence of his MVP-worthy quarterback, Hall of Fame left tackle, starting middle linebacker, and starting running back, among others.

On Wednesday, Lombardi struck again, this time not so much with a scalding take, but rather with a complete lack of knowledge on the Eagles' quarterback situation.

In a 1:16 video segment with The Ringer, that used to be here before The Ringer deleted it, Lombardi was asked the following:

"I have one crazy scenario that could play out. So Nick Foles wins the Super Bowl, he’s the Eagles’ Super Bowl winning quarterback… Are teams making calls for Carson Wentz?"

So, personally speaking, if the Browns, for example, called me (I'm the GM in this scenario) and offered their next 5 first round picks, including the No. 1 and No. 4 overall picks this year, maybe I don't hang up the the phone instantaneously, but ultimately, I'm probably going to be inclined to just turn down almost anything for Wentz. In other words, it's not even a question.

"No, because Carson Wentz was so good, right?"

And then it was all downhill from there.

"And so the Eagles now are in a dilemma. That’s why I think they’ve been pumping up Nate Sudfeld so much, is because they probably know they can’t afford to bring Foles back. It’s the Jimmy Garoppolo situation. Do they pay Foles as a starter? We know Wentz got hurt in December. For him to be back in September, might be a little iffy, right, so you’ve got the September games. Who’s going to play those at quarterback? If you’re Philadelphia, maybe you draft another quarterback. Maybe you go young or maybe you sign one of these other guys. If you’re Philly and you’ve dressed up Nick Foles to make him look this good, you probably have the sense that, maybe we’ll make anybody look good. Maybe we’ll even bring Aaron Murray back and maybe he’ll figure it out, I don’t know...

"What Foles has done in the two playoff games has priced himself out of the Philadelphia market, for me, I think."

Except, um, Foles is under contract with the Eagles next season. Why exactly would they pay him "starter money" when they don't have to? Or did Lombardi just have no idea that Foles wasn't a free agent?

The reality is that the Eagles are in a fantastic situation as a result of Foles' surprisingly good play. It is in no way a dilemma.

The Eagles can do nothing, or something, and be perfectly happy either way. There's literally nothing negative whatsoever about Foles' quality play. If Lombardi is this bad playing GM from the outside, how bad must he have been with actual responsibility?