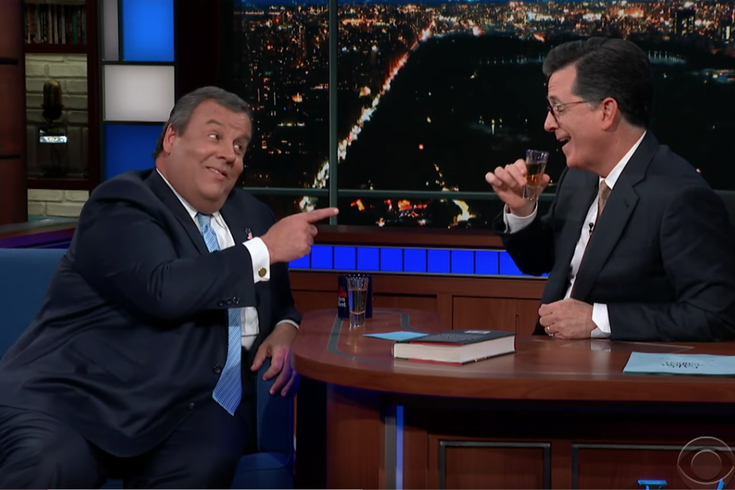 Former New Jersey Governor Chris Christie was greeted with Bon Jovi as he walked out on to the stage of the "Late Show with Stephen Colbert" to promote his new book, "Let Me Finish."

But before the interview could start, Christie made it pretty clear he wasn't interested in Colbert's questions without first having a drink. The host took out two shot glasses and placed them on his desk. He picked up a bottle, and warned, “This is that liberal George Clooney tequila, I hope you don’t mind.”

“Let me tell you something, if it gets me loaded, I don’t care.” Christie downed the shot in full while Colbert sipped his, before diving into his first question on who the former governor thought was at fault for the government shutdown. Christie nonchalantly replied,  “The president blew it.”

“When he shut the government down with no plan on how to reopen it.” Christie added that he told the president in person that he needed some sort of an exit plan.

Colbert noted Trump's common accusations of the invalidity of the Justice department. Christie, a former U.S. Attorney, mentioned that Trump's comments hurt him “personally," adding, “If we don’t have a justice system that the American people have confidence in we’ve lost a huge part of our democracy and that’s unacceptable.”

After discussing if Christie would have made a better president than Trump ("yes" was the answer) Colbert asked "Who is your constituency now? Who is, and I want to say this in the nicest way possible, but who likes you?”

Colbert mentions that Christie left the governorship with a 15 percent approval rating to which Christie responds, “Who cares?”

Christie mentions that Colbert’s team backstage gave him a pretty warm welcome, “Let me just tell you there’s a bunch of Jersey people back there and they liked me.” Colbert replied with a subtle burn, “Really? 15 percent work for me? I thought we had the best.”

Adopting a more serious tone, the former governor said, “Here’s the thing: When it mattered, when it really mattered, when I was running for re-election, I got 61 percent of the vote. And you know what, after eight years if they don’t want to kick you out then you didn’t do anything significant.”

As to if he would run for office again, Christie responds, “You just told me I’m the most unpopular person in the world, why would I run for office?”

Watch the two part interview below.