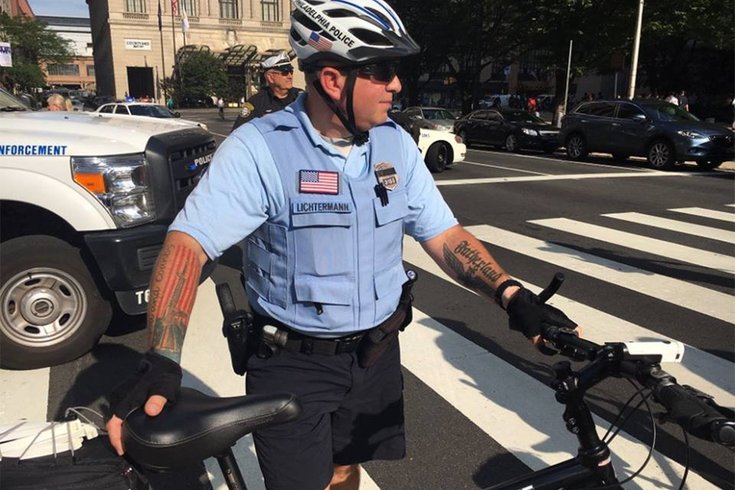 Back in February, the U.S. Navy announced it was “looking to expand the civilian police force for installations in the Navy Region Mid-Atlantic.”

“No experience is required and the hiring process is being done through direct hire authority which will streamline the process to help identify candidates who fit the job,” read the announcement on the Military News website. It said applicants must be 21, pass a background check, a physical agility test and a drug screening.

The installations include the Philadelphia Naval Yard, where the civilian police force has jurisdiction over the Naval Surface Warfare Center and the Naval Foundry & Propeller Center.

In one eye-catching case, expanding the force meant hiring a former Philadelphia police officer who was the focus of a controversy that landed in the headlines.

While Philadelphia police and Allied Universal security officers respond to calls coming from the non-military portions of the Naval Yard, which houses businesses like Tasty Baking Company and Urban Outfitters, the naval officers interact somewhat regularly with tenants – some 13,500 employees at 160 different organizations and businesses located there – and an estimated 100,000 annual visitors.

The starting salary is $36,063 annually with those hired for higher-grade jobs starting at $49,471, per the U.S. Office of Personnel Management’s salary table.

It’s because of that overlap (between public and private) and the monies being spent, concerns have arisen over several officers hired to provide security for those sensitive sites.

With the caveat that no specific complaints about job performance or treatment have been publicly aired, PhillyVoice recently learned that the Navy Yard is where Ian Hans Lichterman – the former Philadelphia police officer who drew negative attention because of an “apparent Nazi tattoo” – landed after leaving the city force in mid-March.

Lichterman is a captain on a force that some say has other questionable hires. 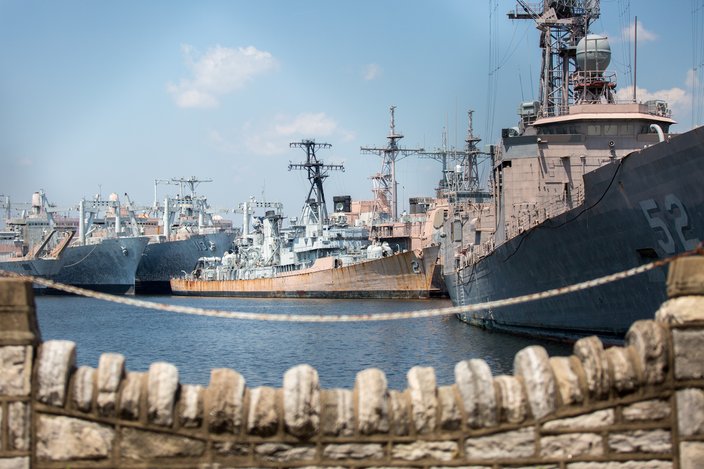 Although the U.S. Navy has scaled-back its operations at the Philadelphia Navy Yard, it currently operates a Naval Inactive Ship Maintenance Facility, (or NISMF), where inactive ships are held while their final fate is determined.

The roster already included an officer – Howard “Doc” Giles – who was investigated for inappropriate behavior and viewing child pornography as chief of a department in Iowa more than 15 years ago and a captain – Shane Daly – who was permanently barred from law enforcement work in New Jersey after pleading guilty to charges that he stole items from the USS New Jersey in the wake of the 9/11 attacks.

Camden County spokesman Dan Keashen said Daly was employed as an officer with a county parks police force that’s since been disbanded.

A county attorney in Iowa and the state’s Department of Criminal Investigation were unable to track down the outcome of the allegations against Giles, who resigned several days before the accusations were brought to light.

Update: Several days after this story was posted, Mitch Mortvedt, assistant director of the field operations for the Iowa Department of Public Safety, told PhillyVoice that "no charges were filed in connection with the investigation" into Giles.

Chris Cleaver – public affairs officer for Naval Support Activity – confirmed last week that Lichterman, Giles and Daly were all employed at the Navy Yard. He did not respond to a follow-up email seeking information about the civilian force's hiring practices. (Attempts to reach officers who work with the trio also were unsuccessful over the past two weeks.)

Before he made it private in the days after PhillyVoice inquired about his position at the Naval Yard, Lichterman's Instagram page publicly featured images that verify his employment in a Department of Defense position.

'A HIGHER LEVEL OF SCRUTINY'

Hans Menos, executive director of the city’s Police Advisory Commission, said the news is problematic for their fellow officers since “the uniform make you a part of the whole and the actions of one have an impact on others.”

That notion, he said, extends to other professions, but the fact that law enforcement officers carry guns escalate some concerns. He balanced that out by discussing societal re-entry and second chances, which should extend beyond people leaving prison.

“These aren’t the folks you want to help ‘build your brand,’ and it’s utterly fair and reasonable that they should be held to a higher level of scrutiny, character and being impartial when dealing with the public,” he said, noting he was less concerned about Lichterman and Gilles than Daly, who’d already been barred from serving in law enforcement in a neighboring state.

“Nazis obviously shouldn’t be allowed to carry guns.” – Mindy Isser, who received "insane death threats" after tweeting out a photo of Lichterman’s tattoo in 2016

“Everybody should have a chance to support their family, but when you enter the public realm, there should be a hard look at whether you can be impartial and fair when it comes to their awesome responsibilities of taking away someone’s life and liberty,” Menos said. “If you’re carrying a gun, you’re saying you mean to use it, so you better have great decision-making (abilities) and high moral character.”

For his part, Mayor Jim Kenney stood by his earlier statement that Lichterman's tattoo was "incredibly offensive" when his office was told of the officer's new job, about which he had no further comment.

Mindy Isser, a labor movement organizer from Point Breeze, drew much attention to the issue to the point of receiving “insane death threats” after tweeting out a photo of Lichterman’s tattoo in 2016. (It shows the word “Fatherland” over an eagle symbol deemed close to that used by the Nazi party.)

She had some choice words upon hearing the news.

“Nazis obviously shouldn’t be allowed to carry guns,” she said Monday. “The fact that the PPD didn’t care about having a Nazi on their force, and now apparently the Navy doesn’t care either, is indicative of the fact that we live in a white supremacist society that continues to protect Nazis while endangering everyone else.”